I've had a great day.

It started with a moth trap catch that on any other day would be a poor result, but when you step out the back door and immediately see a stonking Puss Moth on the patio then all is good. I took a quick phone snap and potted it for later. It's a male so no joy of rearing (for now). 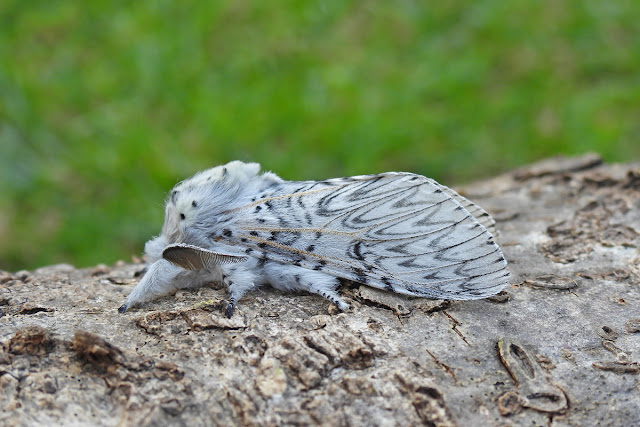 After a bit of breakfast and sorting myself out, I headed out in the car for a day in the field. Which felt distinctly wierd, since the lockdwn the furthest I've driven was to the hospital and back a couple of times as our supermarkets are not too far away. I headed to Ketton Quarry where I expected to find more than enough open space to maintain social distancing whilst enjoying some entomology. 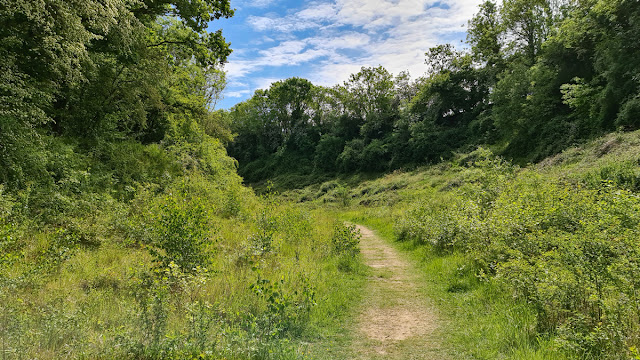 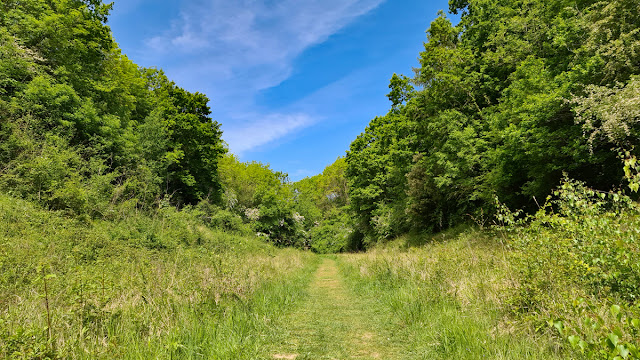 I managed to get around just about the whole reserve in three circuits with the car park providing a nice start-end point and coffee stop. 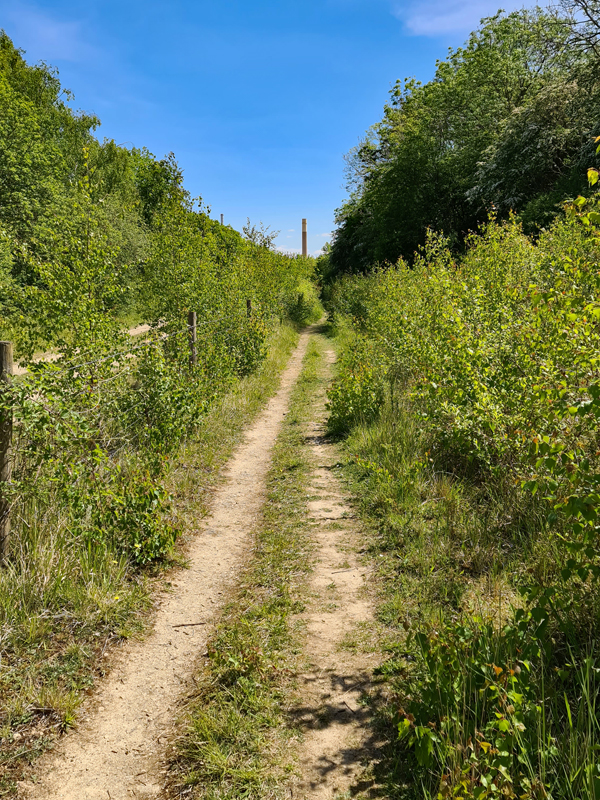 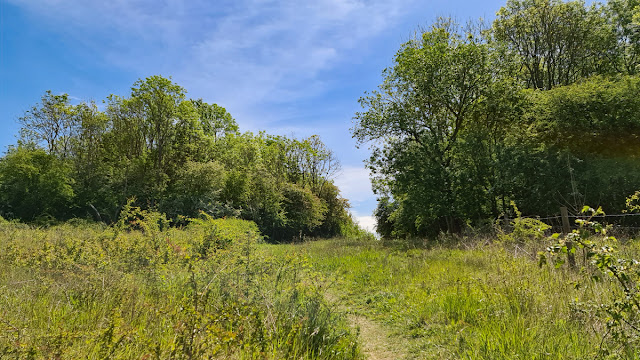 I'm not going to pretend that I was alone in sweet solitude though. I met Andy Neilson immediately on arrival, so nice to have a chat, and throughout my time there I saw a few couples and even three families. I've seen far more people there today than I think I have over all visits cumulatively in the last five years. Perhaps the lockdown has forced more locals, not just dogwalkers, to have a better look around their own areas? Still, there was more than enough space to create masses of free-space and I still saw less people than I have on every walk out of the estate in the last few weeks. 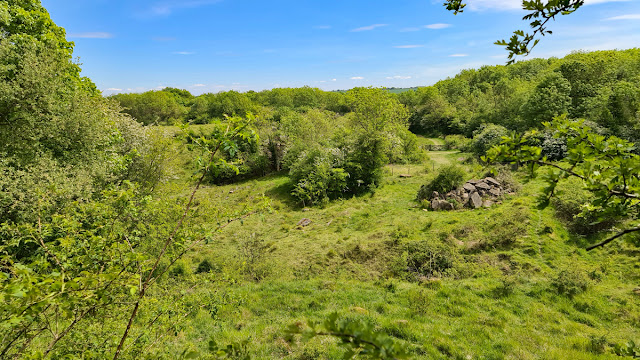 With strong sunshine in the morning and odd cloudy spells in the afternoon, it was one of those days where there was so much going on it was easy to actually miss more than see. I didn't know whether to sweep, swish or just point the camera, and more often than not whatever I chose was the wrong option for that insect. But I managed to see a lot of stuff, far more than I've potted or photographed (which gives me an idea for a future posting about recording).

I deliberately limited what came home at I've got more than enough to keep me busy, but I'll share a mixed bag starting with this .... 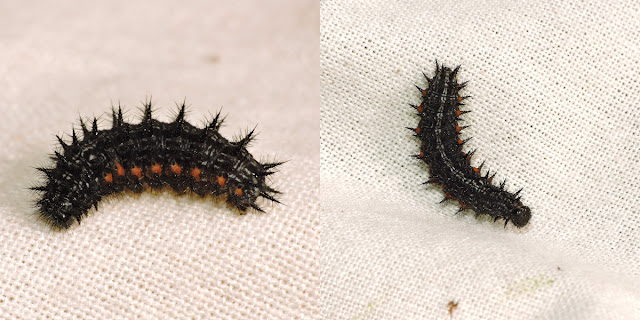 Recognise it? No, neither did I other than it was a butterfly. I saw two, both were wandering swiftly across pathways and neither would sit for a photo so I bunged them inside the sweep net to get a shot for later ID. Nearly spluttered my coffee when browsing the new book I quickly worked out that this is Dark Green Fritillary. No way! Wish I'd made more effort on the photo.

Another crap by necessity photo was this unexpected beast ... 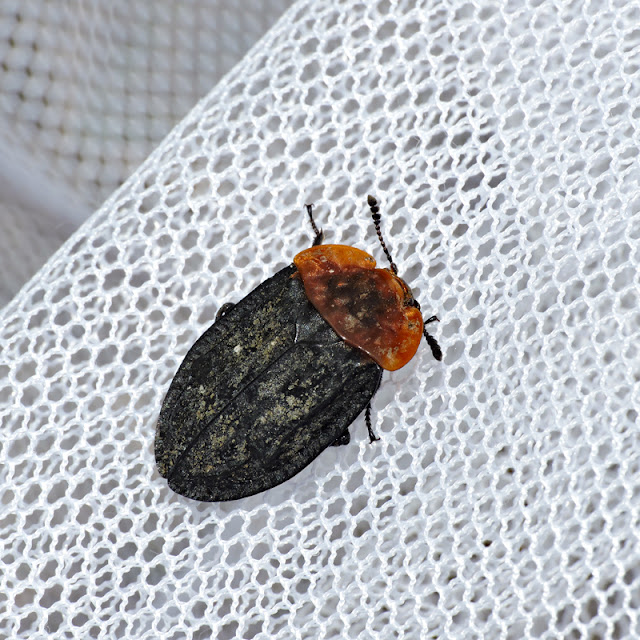 I noticed it crawling up a grass stem and looking like it might fly as I got the camera ready. And it did fly, but luckily I was ready with the net. I grabbed this shot, let it out onto the path for another photo and it immediately starting a stuttering scuttle before flying off again, so this ended up being the best shot. I've only seen one before, and this is my first in VC55.

Other stuff that I did point the camera at, but nice to see again, included: 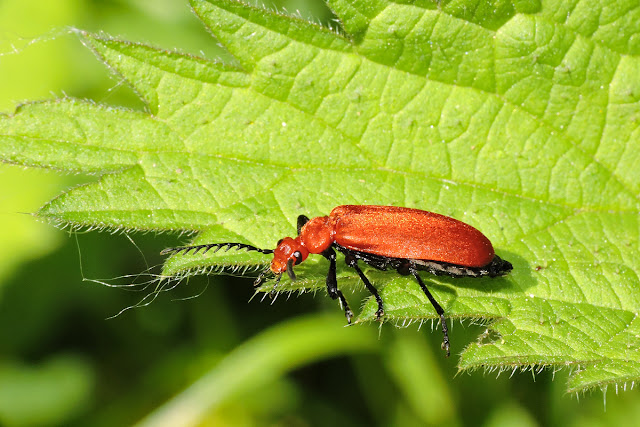 Cardinal Beetle - we'll be sick of them in a week or so, like the cantharids ... 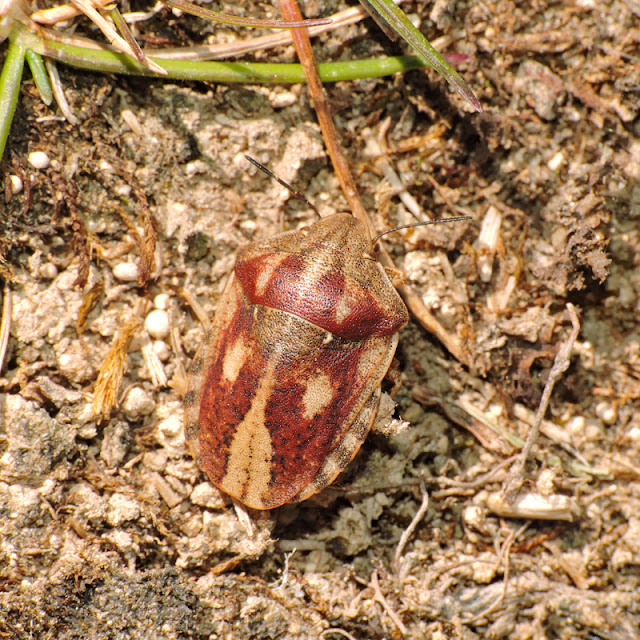 Eurygaster testudinaria - the best shieldbug seen today, but not the best bug as I have a Denticulated Leatherbug to try and photograph. 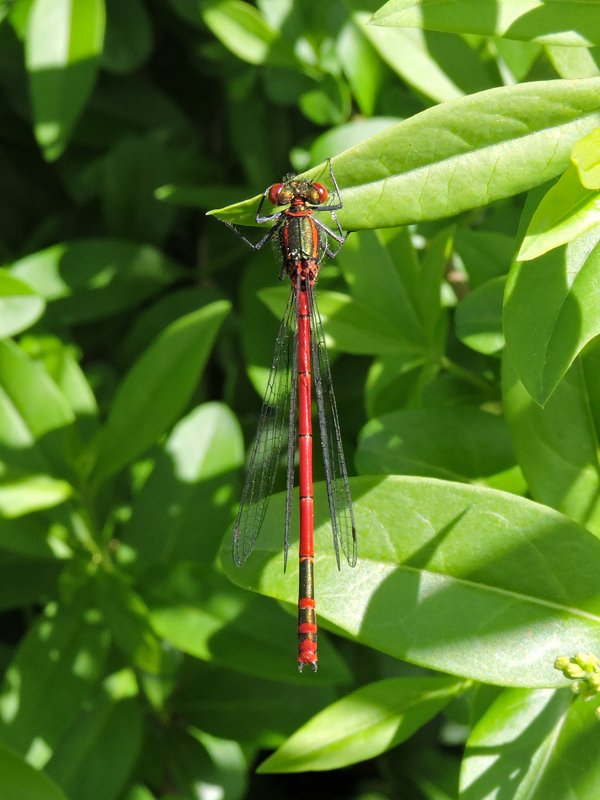 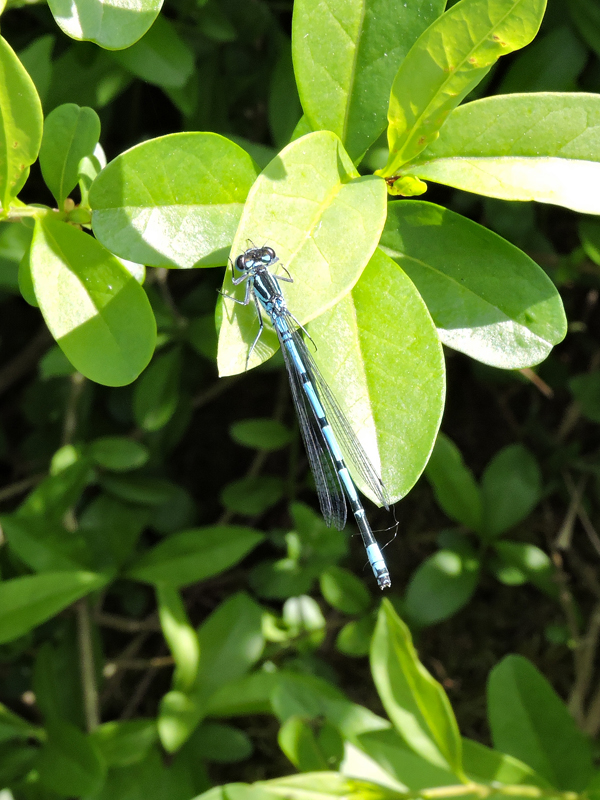 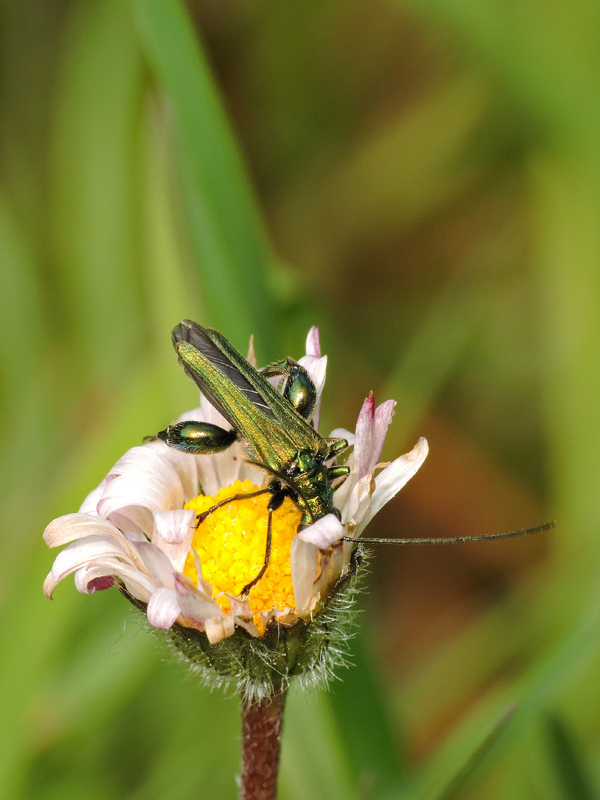 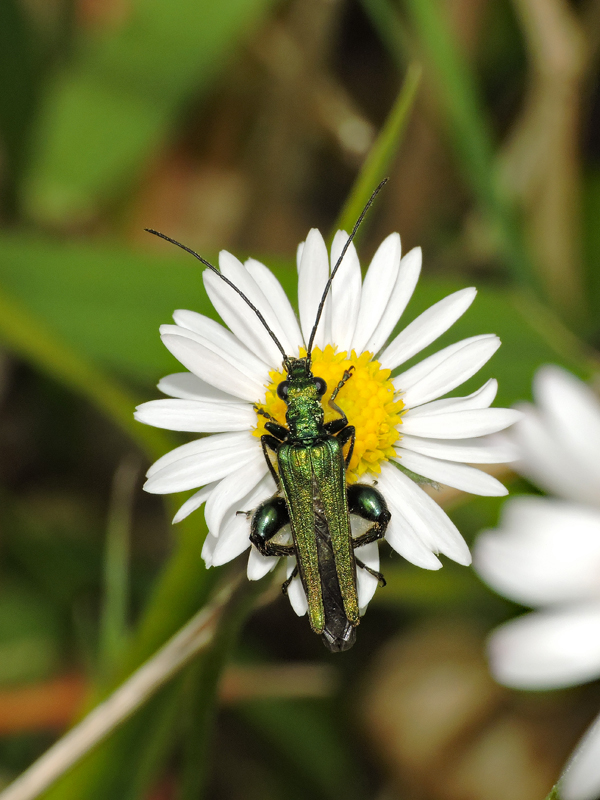 Best hoverfly was this, one of two seen .. 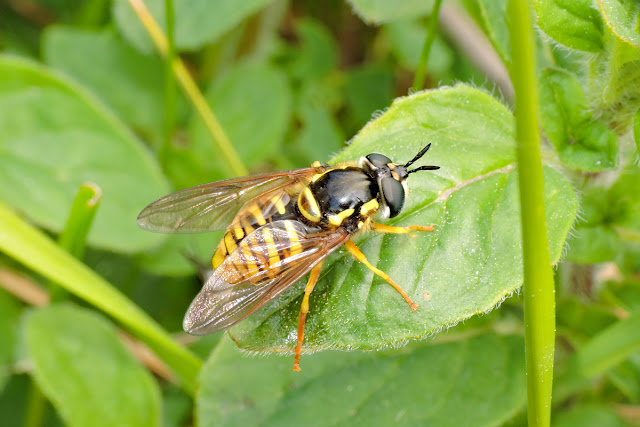 And the thing that put the biggest smile on my face was seeing hundreds of these glistening like little jewels on almost every yellow flower .. 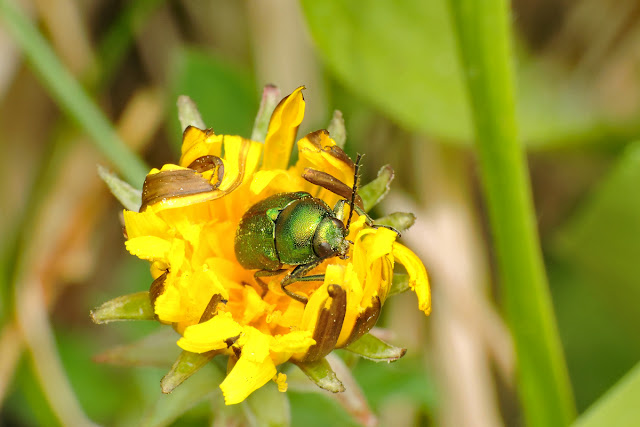 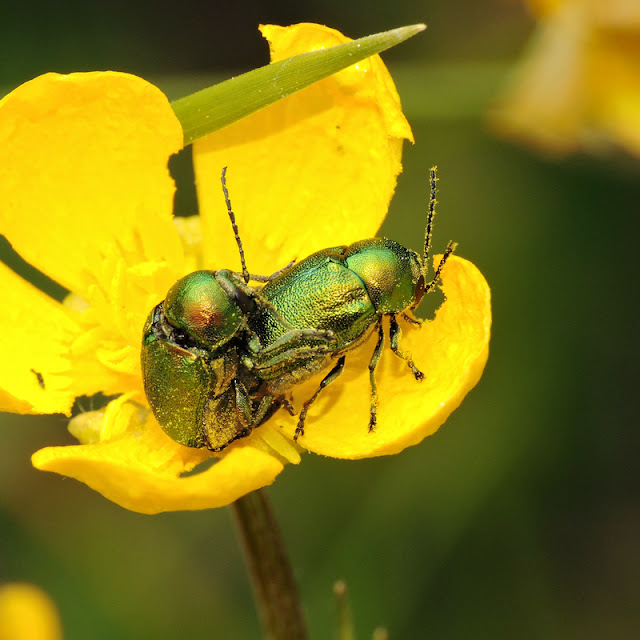 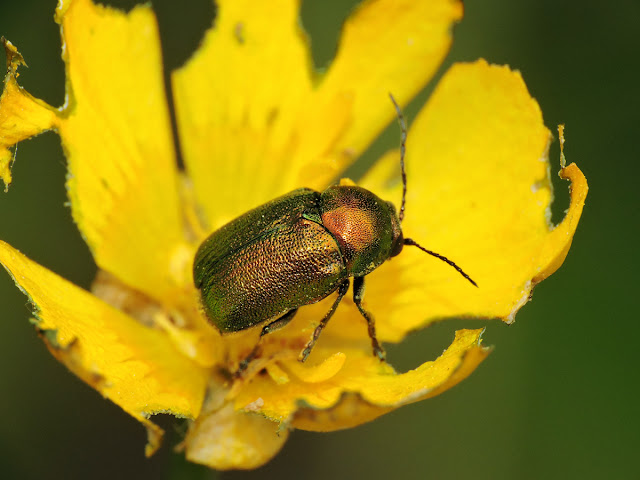 It was good to get out into big space again.

That does sound like a nice day. I've booked a day off on Wednesday so hoping to hit a few sites. Nice while it lasts...

Madly jealous, there's more wildlife (and sunshine!) in those pics than I've seen in a long time. It's meant to hit the heady heights of 12 degrees later (though feeling like 8) so I'm off into the woods to find less than you did, haha! :D