Back in January and February, before the pandemic turned our lives upside down, I'd enthusiastically set myself a few recording targets for the year. We then had a protracted period in the early spring where travelling away from home, other than locally on foot, was not happening. There is a lot of year left to still actively have a go at some of my targets but I thought I'd have a bit of a moment to take stock as it were.

On 18th January, having just gone and looked at a big patch of Winter Heliotrope, I aimed to draw up a 'hit-list' of c50 other vascular plant species that I should be able to see in VC55. As at 7th August I'd seen an additional 42 new species, 38 of which were in VC55. But, all but four of these VC55 additions came in July and so far in August ....

On 10th February, I decided to compile a garden beetle list. I knew it would be less than impressive as my garden is not exactly awash with superb habitat etc, and quite frankly whilst I have developed my interest in beetles I'd never made any particular effort to build a garden list. Nevertheless it started at 69sp and I hoped to build on that through the year. As at 12th August the list stands at 94sp - 25 species added in almost exactly six months. I guess I'm more pleased that this includes 14 that I'd not seen anywhere before, including two inconspicuous ladybirds and a first for VC55.

I also hoped to submit more records, more methodically. I've done a lot better than I usually do on that front, but even so I'm not quite uploading on a weekly basis. Most of the interesting stuff I've seen whilst out and about or from the garden has been submitted though. As I've mentioned before, anything put onto Naturespot gets sucked through to iRecord, and I've also uploaded directly to iRecord for anything out of VC55. Here's a map from iRecord of where I've uploaded records for so far in 2020.

Meanwhile on the PSL front, a quick tally up across the orders indicates that so far this year I've seen 201 new species. 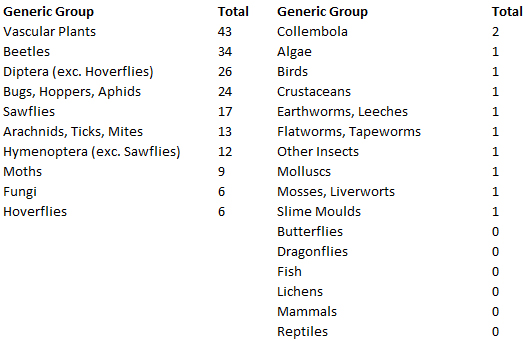 I thought two new globular tiddlers was an epic effort ....