That Ophonus sp. I mentioned, another one from the garden trap. As I'd said, the pronotal shape was wrong for O. ardosiacus and there was a single pronotal setae which excluded O. rufibarbis. So both of the most likely species were out of the frame, and all other Ophonus spp. are scarce / rare/ non-existent in VC55. The nearest I could get to through the key was O. punticeps, for which there were only two previous records - one in the 19th century and one from 1997. However, although I suggested it may be this to Graham Finch when asking for his help, I wasn't confident enough to pin my colours on the mast as it were.

Cue another e-mail from Graham; bugger me it is Ophonus punticeps. Here's another one of his superb photos. 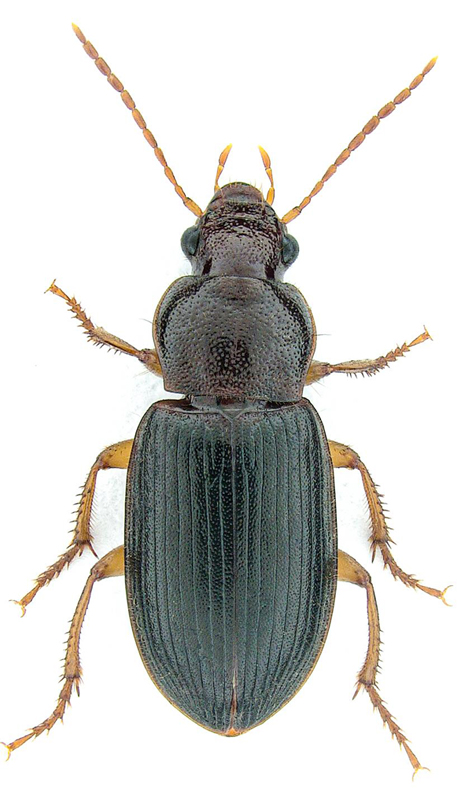 If nothing else, it shows the value of actually looking at the beetles coming to the light trap. So often I only have a cursory look after dealing with the moths, and especially during the working week my time to look at other stuff in the trap - let alone photograph and pot them up - is limited. I must miss loads! That's nine new beetles for the garden list since 31/07 - all to light traps.

Today is proper dingy and wet though. I've spent most of the day so far getting records uploaded to Naturespot/iRecord and doing a bit of basic DIY for my Mum (basic is the only DIY I ever do). I'm going to catch up with the F1 later - call me a sucker for punishment.

This weekend I have mostly been listening to recent (within the last year) stuff by 808 State. I was meant to be going to their gig in March, which has been deferred to October .... let's see how that pans out. The niche gig I was also going to in March (Heaven 17 reworking the original Human League albums Reproduction and Travelogue) was originally deferred to September and now to September 2021! The Kasabian gig in June in Leicester was cancelled completely (before Tom Meighan's life went down the pan) and of course the Isle of Wight Festival, which was going to include The Chemical Brothers, was cancelled and tickets remain valid until next year. I don't think I'd ever been so pro-actively booked ahead for gigs and stuff and it all went to the proverbial.