Happily minding my own business at work, trying to ignore the glorious sunshine outside, when the phone bleeps with a message. I say bleep, but actually it was a five second blast of a seriously grimy dubstep riff that I'd spliced on the PC. Anyway, I digress. It was a local grapevine message on the LROS twitter service. STONE CURLEW at North Luffenham MOD Airfield. Feck!

Thankfully, regular watcher at this site Tim Collins had not only found this stonking bird during one of his regular Wheatear counts (absolutely ridiculous numbers of Wheatears passing through this site over the last few years, peak counts of 40+ last spring!) but he'd also negotiated access with the MOD, provided the news and details and made himself avaiable to guide us on and off site. What a thoroughly decent chap, and making a donation to his chosen charity was the least anyone turning up could do.

I made the swift and entirely rational decision to leave work, nip home to grab a couple of bits and get myself over there for the first guided visit at 18:00. I arrived in good time at the golf course rendevous to find Andy Brett and Chris Hubbard already waiting. We soon picked up a Wheatear and a superb singing Cuckoo, plus obligatory Red Kite overhead. We also picked up a car with Andy Harrop already on site, turned out to be Tim's car and they were checking out the best place to view from. Soon a few others arrived, including Roger Davis and Rod Baker. John Hague arrived in the nic of time just as Tim was about to lead us in. Matthew Berriman arrived even closer to the wire, but then we were off. By that time we'd already seen 10 Wheatears including 8 together on a practice green.

Soon we were set up and filling our boots with a superb Stone Curlew. 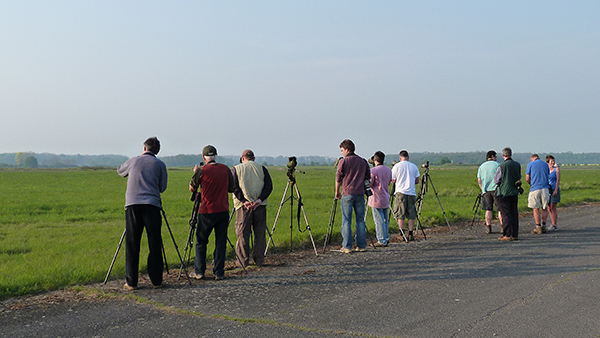 Note the vacant scope of yours truly
To be fair, it sat pretty motionless for the first 15 minutes or so before standing up, shaking its arse and sitting back down. The viewing was distant, but perfectly good with a scope. Not to be outdone by John's competely shite digiscoped shot, here's a full zoom Lumix impression of the bird. Click for bigger if you like, though it is still barely visible .... 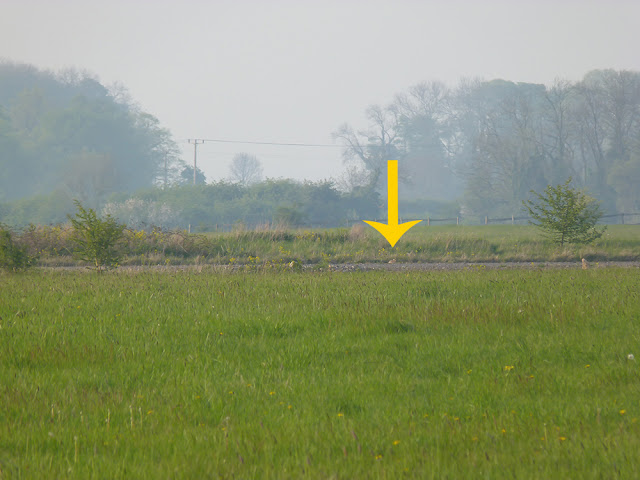 By now a few more were on site including Ian Merrill, just in time to get views before three cars appeared driving down the runway where the bird was. The front two cars were innocent members of the local model airplane group who had not contacted to let them know their meet was cancelled thanks to a rare bird and visiting birders. The third car belonged to a birder. A complete selfish twat of a birder, given that the instructions on where to meet, site restrictions and sensitivities etc were explicitly clear. If you happen to own a metallic grey/green Mondeo and were on site, you will know the missing letter from the registration KG57 O M and you will recognise yourself. You had the best views of the flushed bird as it flew past your car, and when you drove up to it after it had re-settled further down the track. What a complete C on casters you are.

All in all I watched the bird sitting, flying, walking and stretching for about and hour - by far the best views if this species I've ever had as whenever I went to Weeting Heath years ago they just sat still distantly down the heath in a heat haze. A superb and unexpected County Tick in good company at a great site. A superb eye-level Barn Owl coming out of Edith Weston on the way home capped it perfectly.

There were some notable missing persons from the scene tonight - wonder if they'll get a chance tomorrow .......

With the impending religeous nonsense, and the Stoney tick, I thought this clip was appropriate ..

Hi Mark,
I found a Stone Curlew here on Boulmer beach in 2005. It was in rock pools with ringed plovers! So scarce this far up I was asked to write an artical for Lee Evans UK400 club!!

Big Dipper springs to mind... what a sweet, sweet Twitter message this morning. Gripping people off? Me? Fuck yeah!

I only got a call about the bird at around 5.30.....and by the time i got home from Aylestone Meadows i figured it was just too late to make the run out to Luffenham...[so i thought bollox to it]...

If i'd have known half an hour earlier i cudda made it...twas not to be tho...[so i consoled meself with boiled rice and a roast chicken leg before fucking off down the pub with the lads for a beer]...

ps...one o me mates didn't even get the pager message...oh well..

Cracking bird Skev, plus a clip from my fave film...great blog !

I looked into getting 'twittered-up' a while back and i don't think twitter supports T-mobile/Orange which i am on...[pay as you go]..

I heard, perhaps wrongly, that i'd get charged international rates for receiving/sending SMStexts...fuck knows how much that would be...? It was all a tad confusing...[but i'm sure in reality it's dead simple]...!

I will have to look into it again as i'm kinda out the loop if me pager mates don't get a rare bird alert and let me know...

At the mo if i found/heard of summat good i'd text Andy knowing that he'd send it into twitterworld so everyone would get a heads up...[anyone who ain't a pissing dinosaur like myself]...

All my fault really, missing the stonedcurlew, for living in the dark ages....[chuckle]..!