With another glorious sunny day forecast, I resolved to get up early and make the now annual pilgrimage to Ketton Quarry in search of snakes. I managed to persuade both the boys and Nichola to come along without too much force - we all like a good walk around KQ. Only Isabelle passed - far too busy being a surly teenager and cyber-socialising for going out in the morning sunshine. We arrived just about on time - I intended to be there for 9am as from previous experience any earlier is pointless, but we had to top up with fuel on the way.

Superb close views of a male shortly after arriving - not a snake, but the Drunk-snaker (with Leigh and Matthew) actually out in the field rather than spouting bollocks on facebook ....

After the salutations and mutual disbelief at being out, we eventually got superb views of a male Adder, and then eventually two males and a female. I then headed over to the other paddocks where we found another female out in the open in the area where the Knapweed Broomrape will be later in the year. Nothing under or around the tin-sheets in the donkey paddock, and by the time we got back to the main area John had gone. Sadly, as I then had by far the most prolonged and superb views I've ever had of Adders, with three males and a female on show. Whilst watching them and grabbing a bit of vid, I became aware of another noise and just about managed to grab a couple of shots of a Grass Snake as it slid in and shot out of view. Along with a few brief and skittish Common Lizards, it was a superb morning. Here's a few shots and a vid clip - I urge you to see my Flickr pages via the link on the right to see some more. 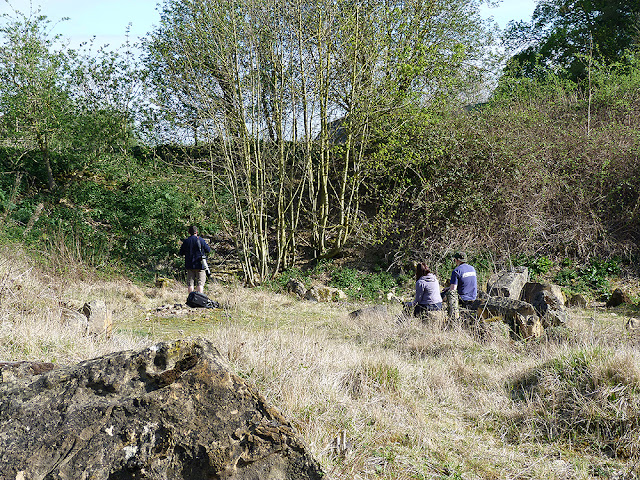 The Drunk Snaker surveying the most reliable reptile amphitheatre in VC55 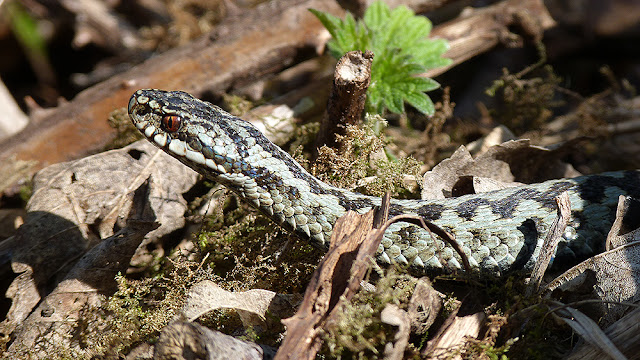 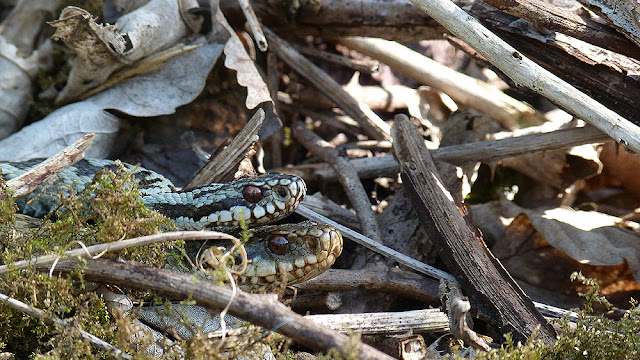 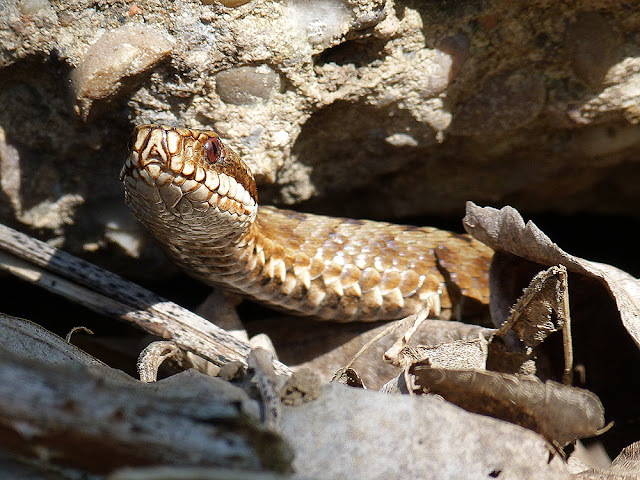 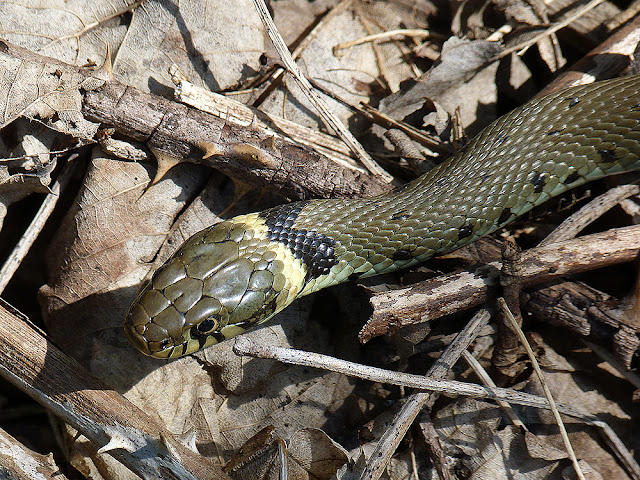 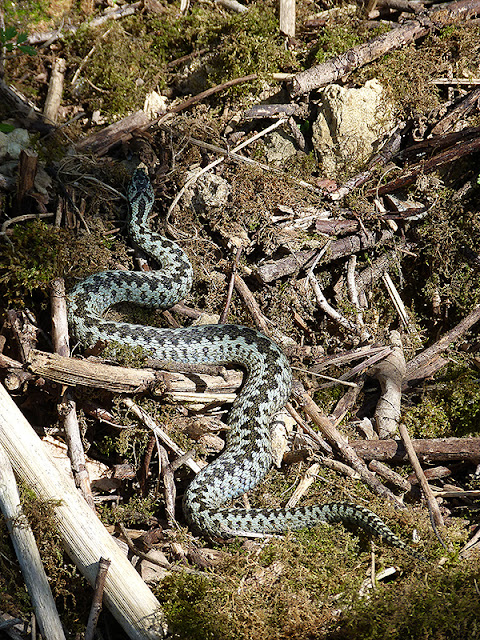 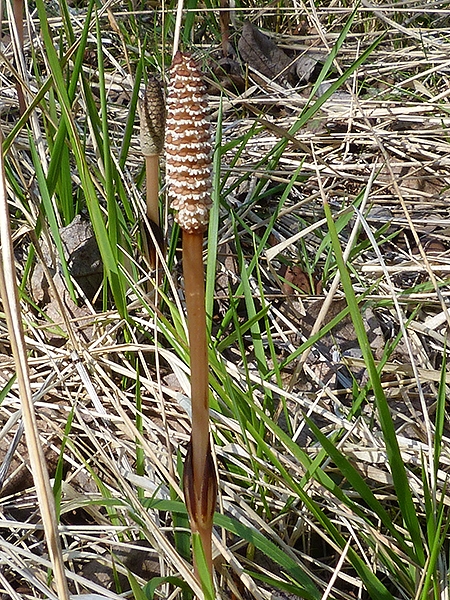 Loads of these poking through - Field Horse-tail
The other notable thing at Ketton was Common Heath moths on the wing - even earlier than last year.

After some obligatory minor DIY for Nichola's elderly aunt on the way home, we dropped into Watermead CP South following grapevine news earlier in the day. Seems everyone else was in the same area which was cram packed with bread-weilding morons, ice-cream toting toddlers, spliff-puffing youfs, picknic-ing Poles and dog-walking arseholes who think letting the dogs chase everything is funny. All interspersed with the odd birder, like Beast and Chris Lythall (odd as in not many, not odd as in fecking mental, clearly). The prize was just about evident on the far side of the island - four pairs of Garganey that all turned up overnight. Superb views through optics after walking around a bit, but always either too distant or too backlit for anything resembling a photo. A pair of Red-crested Pochards were much easier to see than yesterday.

I got home in time to win some money on the National (a modest EW bet on Ballabriggs earning me £19.50). I headed out to the garden and checked on the rearing boxes. Excellent, four female Emperors have emerged today. The timing couldn't be better with the current sunny weather, out for some assembling tomorrow. 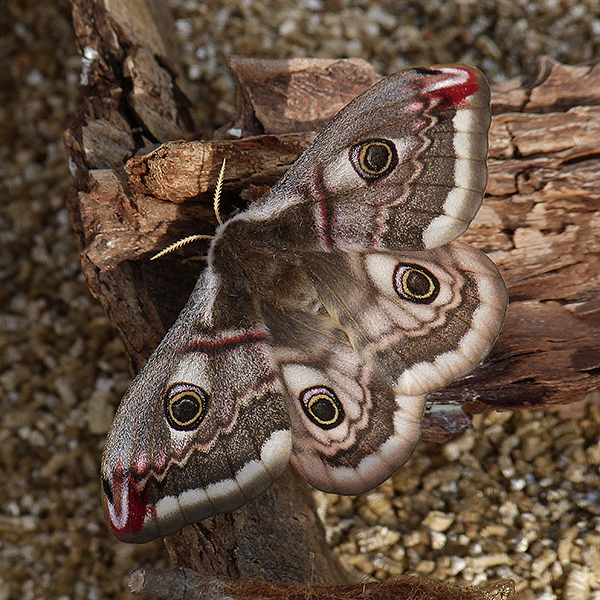 Out of the 12 Emperor Larvae I had. I am now left with just 7 pupae with no sign of any movement at the moment. I am very interested to see how you get on with assembling as this is the 1st year I have tried rearing Larvae.

I'd love to see Emperor in the field. So far all my efforts have come to nought.

Good to see you all yesterday, Leigh and Nichola out in the field in one day must be a first.

We completed a good quacker day by watching a handsome pair of RBmergs at Rutty later on....[stunning male]...