Unsurprisingly I awoke with a headache and missed breakfast on the last day of our brief business trip. After the meetings were closed at c16:15, we freshened up and were whisked off to the Dead Sea for a couple of hours relaxation before a meal. I was really looking forward to this, and was hoping to get in some birding after an obligatory float. On the way we saw some really stunning scenery - very arid desert mountain slopes interspersed with goat herders and the odd small township. At various points we passed through armed checkpoints (and I mean properly armed - not a poncy lightweight M4 carbide machine gun but real big fuck-off heavy duty guns mounted on the back of pick-ups). We arrived at a string of sea-side hotel complexes and it was immediately clear that my hopes of natural beauty here were likely to be dashed. The hotels each had a section of crap beach partitioned off and there was very little chance of wandering too far.
I did the floating thing - I guess it's one of those things you have to do at the Dead Sea but you soon get over the wonder of effortless floating, even when you have a gut like mine! I then had a look around the hotel gardens and aside from yet more Laughing Doves (ubiquitous like Collared Doves over here) I found Crag Martins, Red-rumped Swallows and Little Swifts overhead and a few Yellow-vented Bulbuls around. I also noted a number of bee-hawk type moths - haven't sussed out what they were yet. 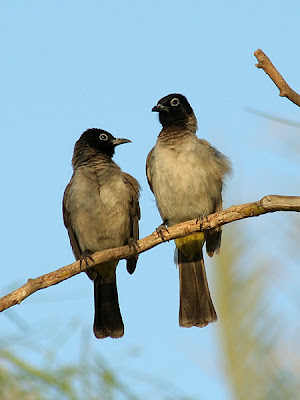 Yellow-vented Bulbul (or Spectacle Bulbul if you prefer).

As the sun set I felt obliged to close the day with sinking sun over Palestine shots (as in the West Bank in Israel). 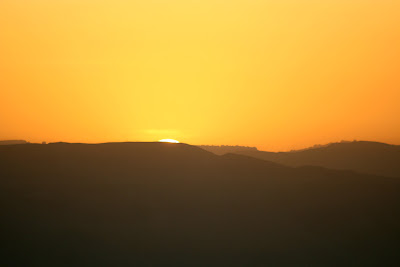 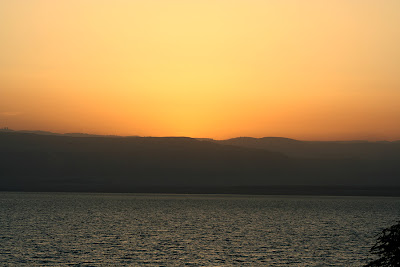 We then had an open air and more BBQ type offering of similar food to the previous evening. A wedding party at the hotel poured out as we finished - apparently a Palestinian wedding with some excellent Arabic drums and chanting heralding the couple as they made their way down to their tables overlooking the Dead Sea.
By the time we got back to the hotel I was quite frankly knackered after the previous night, and only managed a single Amstel before heading back to my room to pack and get a few hours sleep before the 05:30 departure for the airport.
Posted by Skev at 00:02