Decided to give the garden traps an airing last night seeing as I'll be off to Jordan for the week. As the after-dark temps dropped rapidly I assumed the catch would be crap, and I was not far wrong!

The saving grace however was that the only first for the year species, and the highlight, was the third garden record of Chocolate-tip. Seems to be having a very good year - it's not that long ago (20/04/2002) that me, Andy Mackay and Adrian Russell took one at Pickworth Great Wood when it was still a major county rarity (only the fifth VC record and third VC site). 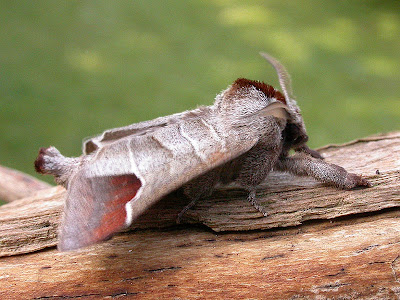 As is often the case, once disturbed this bugger wouldn't settle. I havent got time to fanny about so here's a blurry wing shot for the record!
Posted by Skev at 09:51

Nice to see Choc-tips establishing themselves in the County. I had another one on Saturday morning, making it two so far this year.