Still singing strongly from the embankment this morning, and I managed to grab a few distant shots. 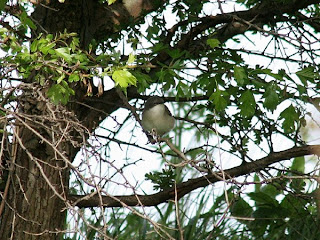 Squint. It's the white-throated round thing in the middle. As ever click to see a bigger version.

I was using a digital dictaphone pre-loaded with the song to try and provoke a response and get the bird a bit nearer. However, I was surprised that when it fecked off in one direction, another bird popped into the same bush only 5 seconds later. This bird was silent throughout it's few minutes on view which makes me think this could be a breeding pair.
Posted by Skev at 22:45