This morning was bright and mainly sunny, just a few high clouds in the blue. Warm enough too, and very little breeze. Just about perfect for clearwing luring ...... 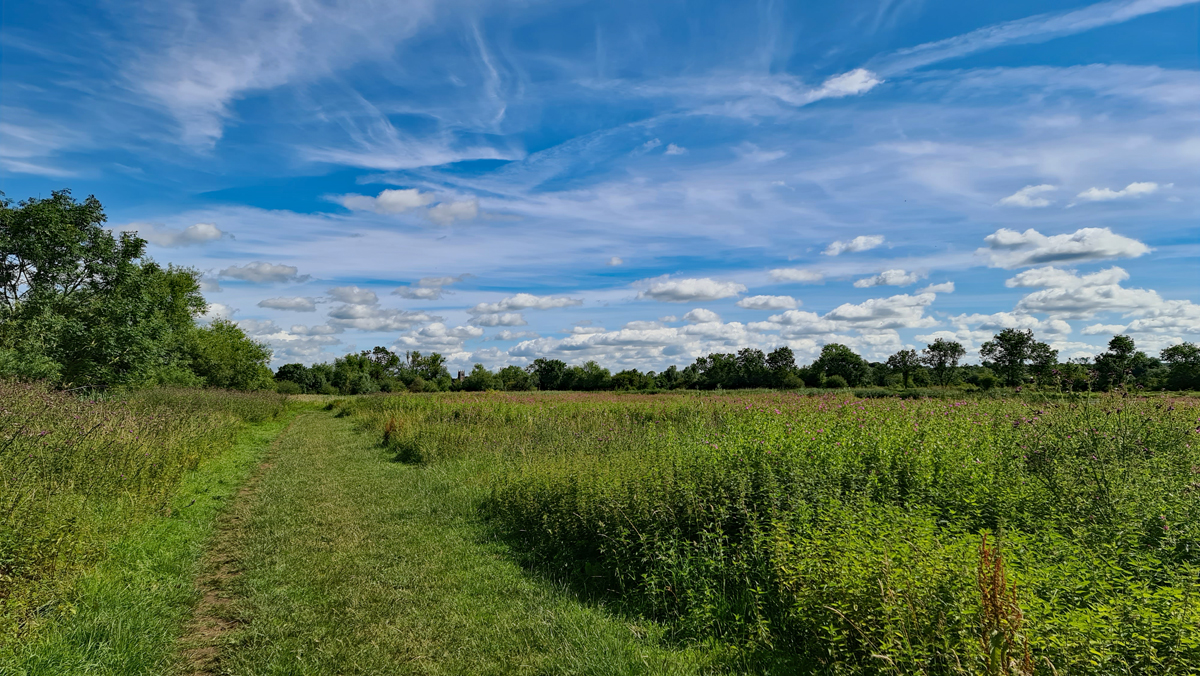 I headed to Cossington Meadows. To my mind, this should be pretty good habitat for Lunar Hornet Moth, with an abundance of willows and sallow. Maybe. After a couple of hours of trying the lure at four different spots around the whole reserve I decided that perhaps the site did not hold the right willows and sallows. And what is 'sallow' anyway. As a diversion I collected some leaves during the day. These leaves .... 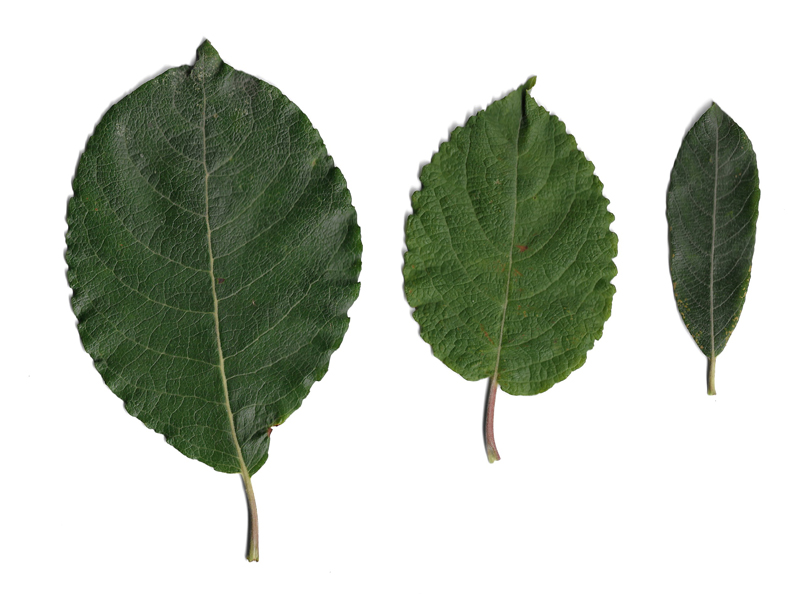 All of these could be referred to as 'sallow' by someone. The smaller more oval leaf on the right is what I call sallow. What actually is it? Probably Grey Willow, or more likely a Grey Willow x something else hybrid. This is the tree that will be profusely covered in yellow catkins in spring that I would stand around looking for moths if I was 'sallowing'. I would also offer copious amounts of leaves from this to any larvae I'm rearing that feeds on 'sallow'. The much larger rounder leaf on the left is, I'm pretty sure, Goat Willow. Or sallow, if that's what you call that too. The one in the middle might also be Goat Willow, or not. Suffice to say these Salix spp. can be a complete pain. Essentially I've decided that if the leaves are very narrow it is an 'osier', long and pointed it is 'willow' and oval or rounded it is 'sallow'.

Anyway, Lunar Hornet Moth apparently feeds within the trunks of 'willows and sallows', which probably means any Salix sp. is possible but I've got a feeling that's not quite true.

I left Cossington and headed to Ulverscroft - there are some previous records from one part of Ulverscroft - though these are of larval workings from the 80s and 90s and I have no detail of what the larval workings were on. I tried and failed. On the way back to the car, I had one last go at a spot that looked not dissimilar from the area I had success in Northants yesterday - a woodland ride with some sapling growth of Goat Willow. 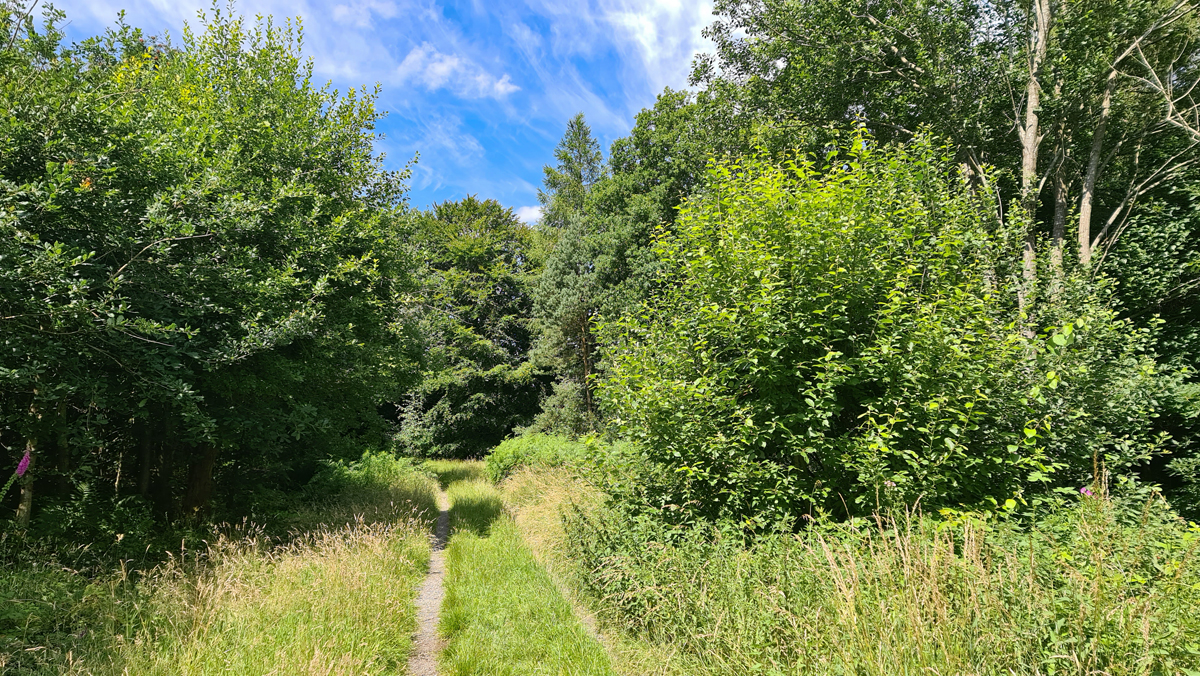 A bushy growth of Goat Willow on the right hand side, with several small saplings out of shot and a larger tree on the left hand side.

Ten minutes later and one showed up .... 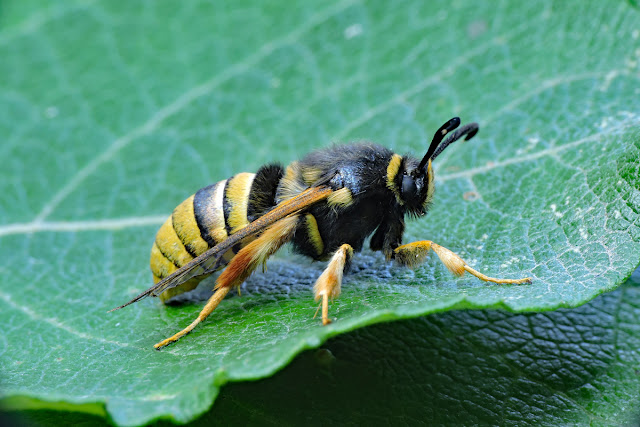 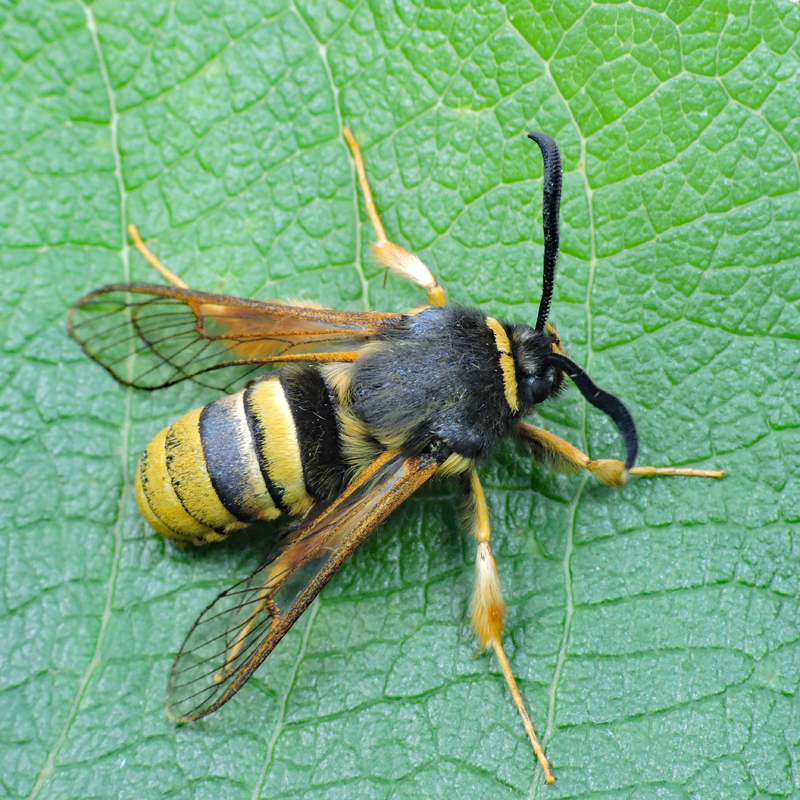 Nice - and good to get one in VC55, even if I have had to work a bit for it. My gut feeling is that sites with Goat Willow will be more successful, but clearwing lures can be hit and miss so the areas with no success so far could still come good on another day.

Whilst fannying about with the leaves I found a new rust, Melampsora caprearum. Seth would have been pleased to see me looking at rust.

Here's a couple of recent flies, the stiletto from Croft Hill and a horse fly from yesterday at Eyebrook Reservoir that I subsequently netted and keyed. 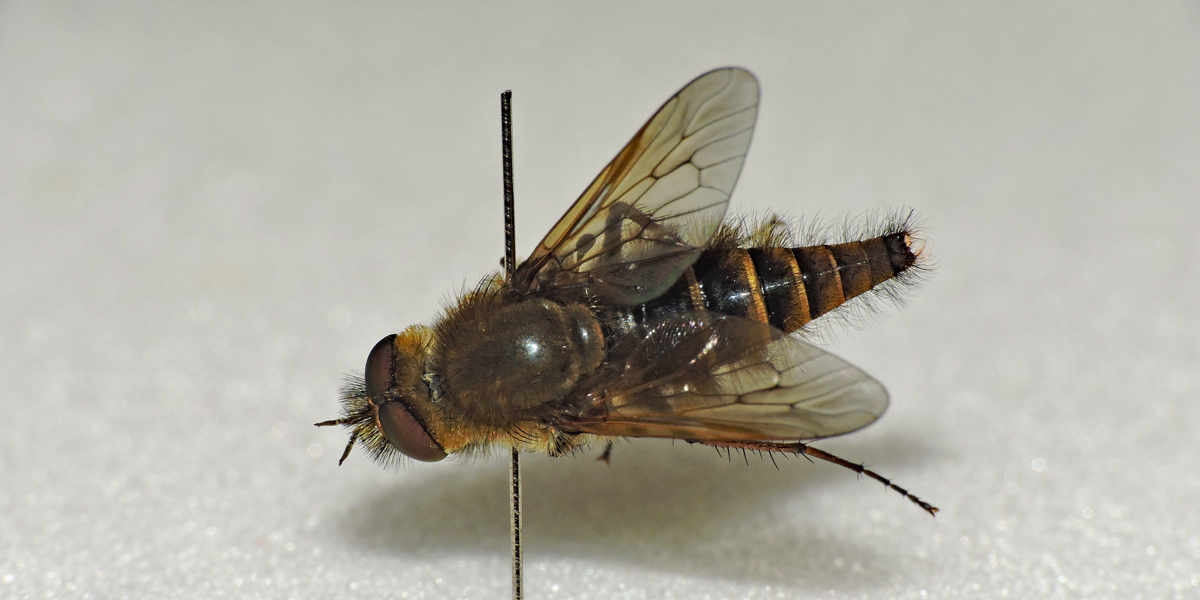 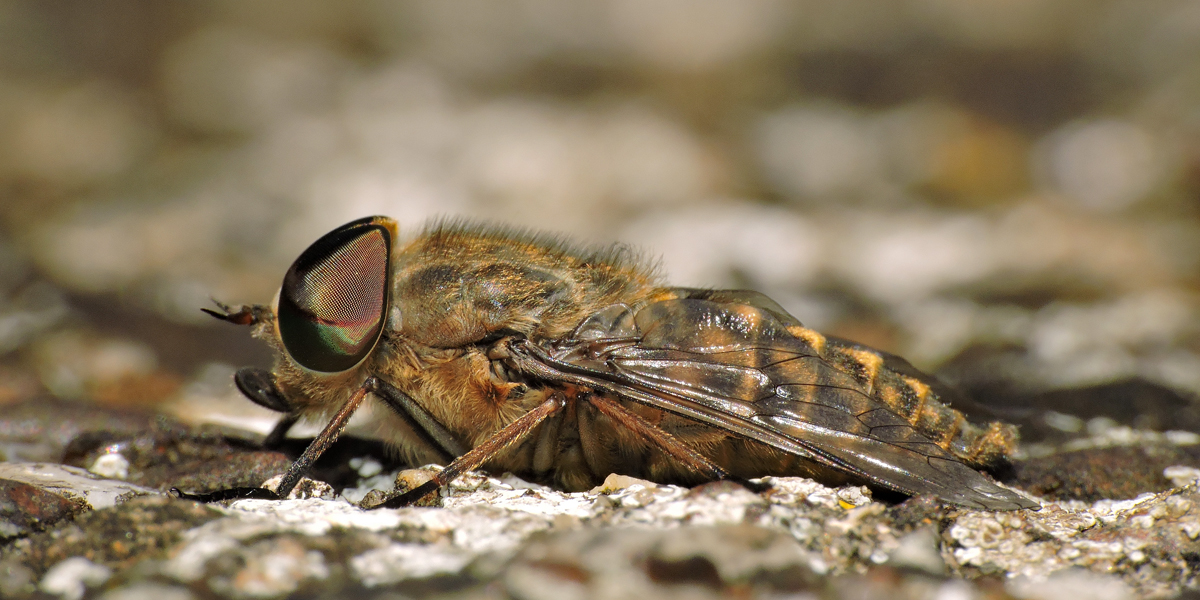 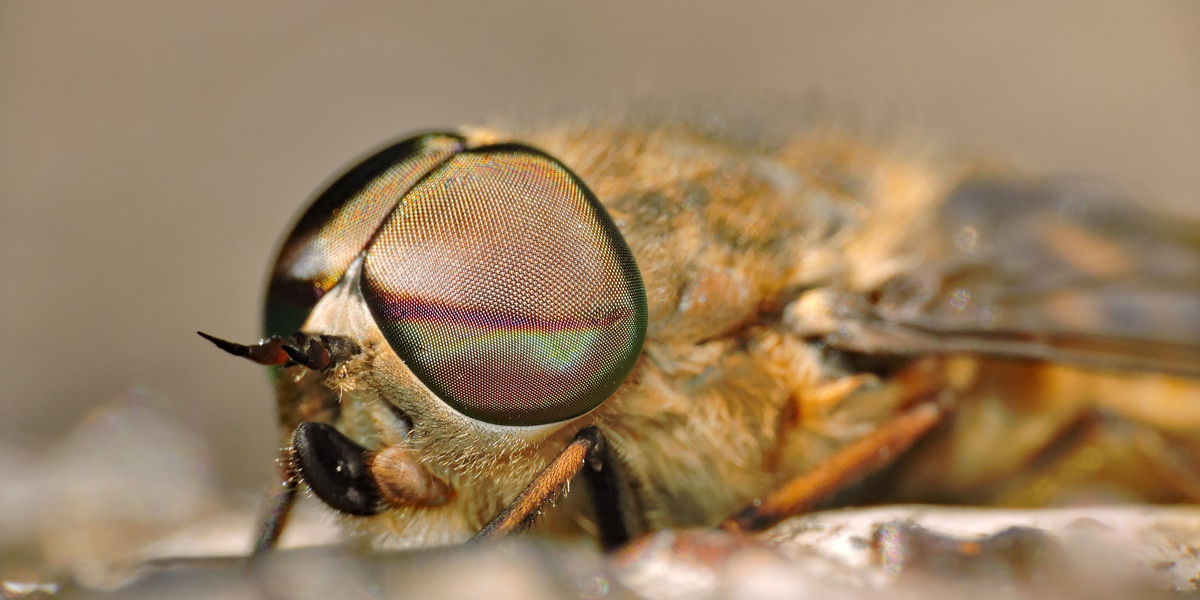 And here's a couple of leafmines. First up, a tenanted sawfly mine on oak .... 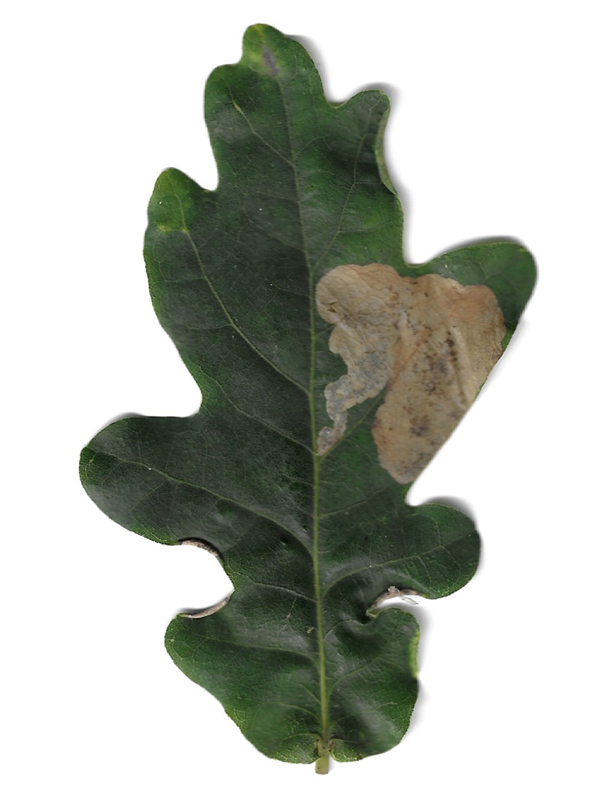 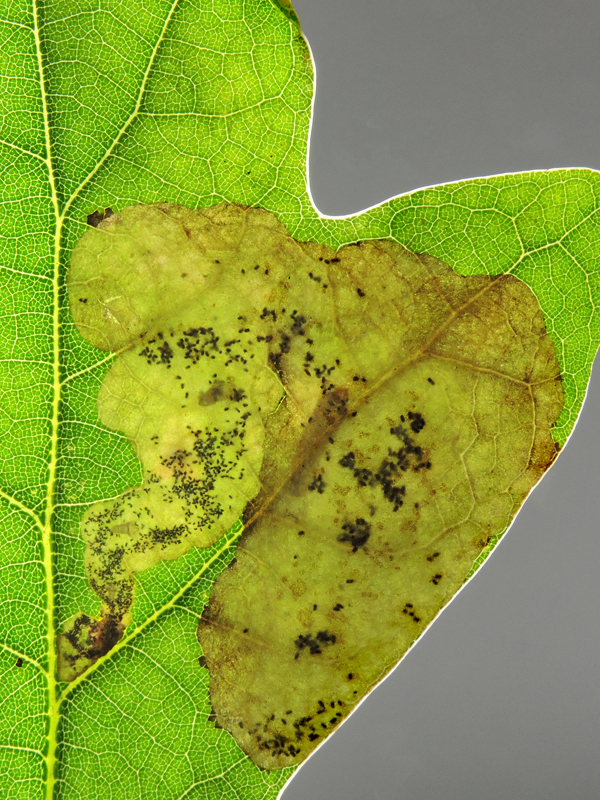 These blotchy sawfly mines are a good source of new species so far, once you know they exist. I had another on birch today too, Profenusa thomsoni.

This one had me completely bamboozled. It's on Crab Apple, and the mine is only discernible from certain angles/lighting - if backlit you can hardly see it at all. I figured it must be dipteran, and posted it to the leafminers group to check only to find that it is actually an early-stage mine of the moth Callisto denticulella. Once you read the description for that species it fits perfectly. 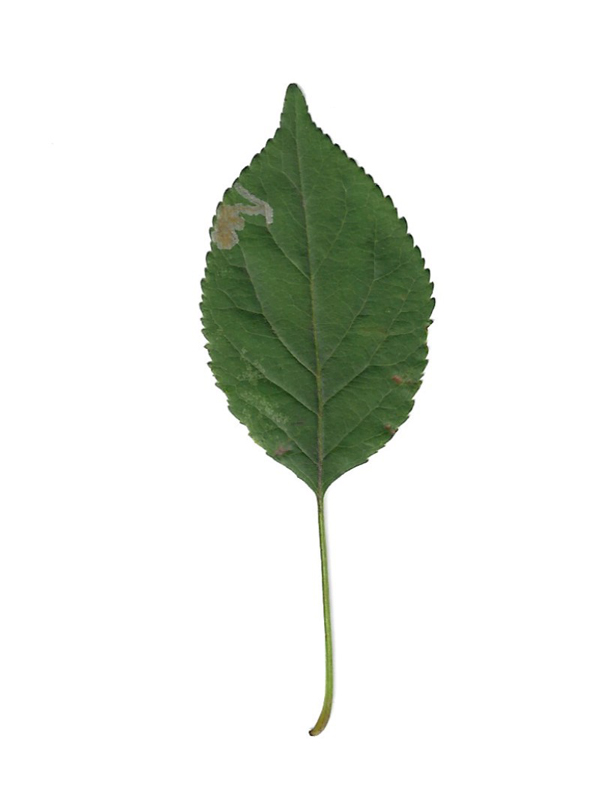 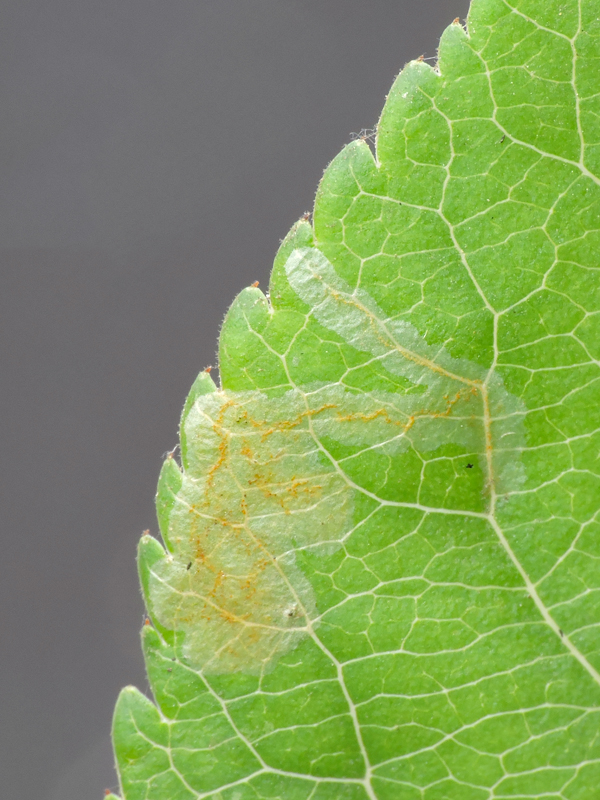 Aren't rusts just great...ha! FWIW, I've only ever found Lunar Hornet Clearwing stem borings in Salix caprea, which is a broad-leaved thing that I personally know as Sallow and the books call Goat Willow. Your left leaf looks about right for it, I think. It's also the only Salix that I've seen Purple Emperor use for egg-laying.