Up until going back to work properly, and prior to the downturn in the weather, I have been steadily picking up a few new species here and there - no great leaps but at a much better rate than I have in recent years. So much so that I was gradually creeping up on the man above me in the PSL list - a certain North Downsman. One way or another, with a bit of fluctuation along the way, the gap closed from c45 species a few weeks ago to within one. Adding a sawfly this evening means that the totals are level - briefly at least, as I suspect Steve will have an update pending. However despite parity, the system has bumped me up one. On the home page at least, the Rankings Page hasn't changed. It probably can't cope with having two people level at #42. 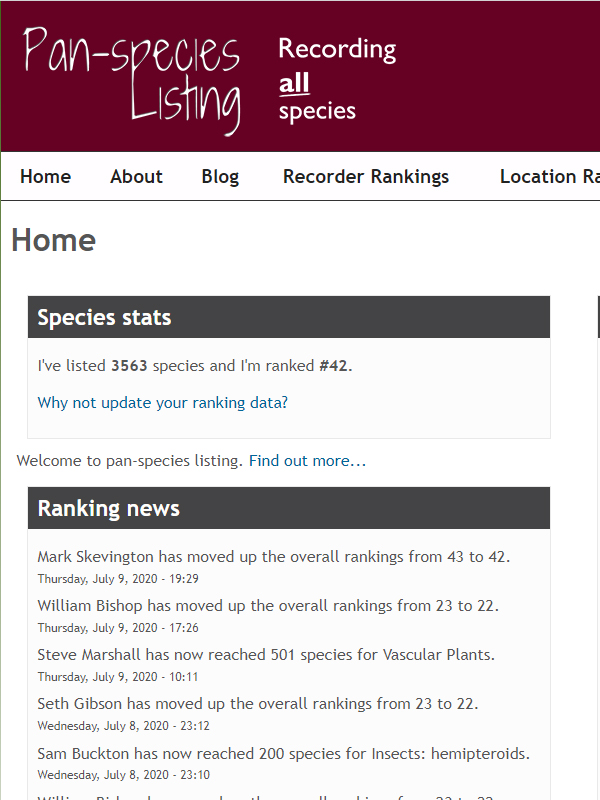 I see that Seth has similarly gained and waned within a few hours as I am expecting.

When I submitted my first list back in 2011, there were few enough people participating (ten) that my meagre total was within the top ten. That soon changed as more people got involved, but most have managed to grow theirs substantially in that time. With a full time job and responsibilities, coupled with bouts of apathy and other buggerations, my list-building efforts were always going to be slow. Of course it doesn't matter a jot. The listing side of things is a bit of a light-hearted aside to generating a few records and stimulating the mind.

Yes, I seem to swap 22nd/23rd position on a near daily basis of late. Of course, before that Calum Upstart kid-lister came along, I was in with a chance of regaining a Top 20 position. That'll have to wait a wee while further now though.

Just added one more.... not kept back just in case like, honest! You have shaken me back into (semi) action Skev.