We live in a suburban estate within earshot of the M1, and well placed for easy access onto several major routes in and out of Leicestershire. Or at least we did until Monday morning. One of the local roads has been undergoing major works for some time causing road closures over night, then reopening by day. The works are to replace an over-rail bridge to give more headspace to allow bigger freight trains through. Problem is that as they have been conducting the work, the road surface has been progressively sinking to the point where at the weekend they had to fully close the route for two-weeks solid (which will no doubt turn out to be a month). Trouble is that this was unplanned and therefore Monday morning traffic was a complete nightmare, and we are now in the bizarre situation where it feels like we are marooned! There are no easy alternative routes as they are now all congested, so it's either slow-going or driving a ridiculously long circular route to get from A to B. Partly to avoid getting wound up in traffic, and partly due to being busy, I've been working late - tonight was the first time this week I was home before 19:30.

So, a full working week, crap weather and isolation from the world all means that there been nothing going on this week. I have lined something up for some fascinating entertainment for me and the kids though. Courtesy of the VC55 Owl Man, Paul Riddle, I have a large quantity of Barn Owl pellets to soak and dissect - really looking forward to this at the weekend.

Seeing as I've seen and photographed nothing, here's a shot of a Sparrowhawk in the garden that Isabelle took on 21/02/2011 (not that she mentioned it until a couple of days ago!). It was taken with a happy-snappy on full zoom in dull weather through a window. Still a damn sight better than any Sprawk shot I've ever got..... 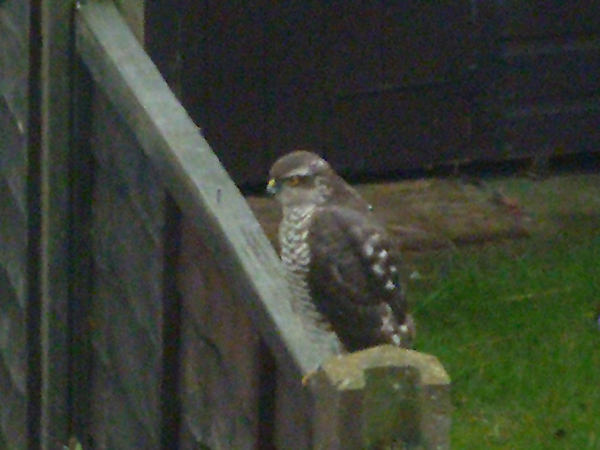