Glorious sunshine from the off today, though it was damned cold overnight with a frost. I needed to spend some time at work, so I decided to get up and out early to enjoy some peace and sunshine before hitting the office.

I decided that a stroll around Watermead CP South would be ideal, giving the chance of a couple of City Boundary yearticks in the process. Before going there, I quickly nipped up Thurcaston Lane to check out the hedgerows and fields within the boundary. Sure enough as I'd been assured by John and Dave, I quickly picked up Yellowhammer. Two singing birds seen well, and a great early morning bonus was singing Skylarks as a backdrop. Excellent - two City yearticks in quick succession.

Immediately as I arrived at WCPS, I noted that the drake Pintail was loitering on the grassy knoll that separates the car park from the northern lake. I fired off a few shots and video.

This bird is definitely a bit screwed up - it is tagging along with a female Mallard, and I even watched it chase off a couple of drake Mallards. To cap it all, it is displaying to her with soft wheezing calls and the occasional heads-up whistle.

Whilst taking the shots and video, I was sure I could hear a Raven. Every time I looked around no sign, but listen carefully to the videos - am I going mad??!!

I could also hear my first singing Chiffchaff of the year, stridently belting out the song that sounds great at the start of each spring but soons disappears in the general backdrop of outdoor life through the summer. I saw this bird a bit later whilst walking round, but saw or heard no others.

Before I headed off to walk around, I fired off a few Mallard shots - common as anything but in good sunlight they have a certain appeal.

This one had no neck.

Green flecks in this ones crown?

The first recorded case of Avian Parkinsons?
Walking along the edge of the southern lake, there were several singing Reed Buntings but still no sight or sound of any reed-skulking warblers that may be expected - have they moved on? I got to the wier and was surprised to find a large patch of Butterbur in flower - haven't noticed these here before. No idea if they have recently colonised or even if they have been introduced - they seem to be on an area that looks to have been scraped out?

Along the river, couldn't resist a shot of this Mute Swan with the flat calm water giving a bit of relfection.

A bit further on, and this pair of Moorhens are well into their nest building ..

Plenty of Osiers in blossom (or at least I think they were Osier rather than Sallow).

I carried on around the lake, and headed down the ride that runs along the woodland. A distinct call from above me coming from alder cones brought an unexpected City yeartick - Lesser Redpoll. Only a couple and they soon flew off when I threatened to point the camera upwards. I decided to make use of the camera in any case ..

Blackthorn
Heading back toward the car park and I was immediately struck by the contrast. Despite the adjacent busy roadway, the southern lake seems just that bit more peaceful. The northern lake has more birds, and far more tossers. Today within the time whilst I was walking around, the waterside was overtaken by a load of arseholes in cars, with tents and with big Newfoundland dogs that were barking their heads of and anxious to get in the water. Add to that the unnaturally high population of geese and swans living on obscenely regular handouts of bread in huge portions and the whole area is a mess.

On the verge of mayhem
Unbefeckingleivable - note the cars, windbreaks donkey-sized dogs and wankers on the far shore. I asked this bloke why he was throwing out so much bread, pointed out that bread was not good for the birds and that it attracted vermin. He smiled broadly and gestured that he couldn't understand me.

So much bread that there are not many Mute Swans bothering to pair up - these are an exception.

A bit of spawn in the pond behind the carpark.
I eventually had to leave and go to work. On the way home I came via the lane and stopped to grab a shot of the only flowers I noted along there yesterday .. 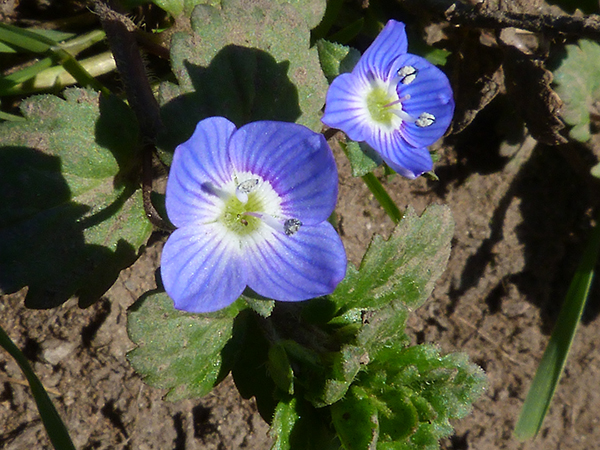 That patch of Butterbur near the weir has been there at least as long as I've been going to Watermead (c.25 years). I've often wondered whether the moth is there...

Also, I added Raven to my house list today - a pair circling and displaying high over the garden and the field behind the house at 12.40, before heading towards Bushby/Thurnby. Just about in the City boundary!

Don't know how I've missed the Butterbur - probably just not recognised it without having seen the flowering spikes.

Do you concur on the Raven in the background to the Pintail clips then?

Not totally convinced it's a Raven - there's certainly something croaking in the background, but it sounds quite close, so it's odd that you couldn't see it. Could have just been a crow pretending to be a Raven.

I have to agree with Andy, I think it's just one of the local Carrion Crows. They've thrown me on one or two occasions before. Raven does get seen from the Mammoth but usually on our VisMig watches.

A pair of Raven flew over Goss Meadows (Beaumont Leys) this morning heading towards Bradgate Park.

Yes John - sure there will be a few around during the year. I think what I heard must have been some sort of demented Crow - most of the Crows around there look a bit in-bred so maybe some evolutionary throw back!