Put the garden traps out last night - though not sure why, the conditions were no better than the previous night. It was probably a subliminal reaction to the garden tick Mompha sturnipennella during the day. Incidentally, I have since been advised that there are only two previous VC55 records for that species - from 1984 and 1998.

Anyway, as I duly emptied the traps this morning I could think of mothing else than how good an extra half hour in bed would have been. Just as I'd finished and went to put the traps away, a previously unseen Caloptilia sp. flew up from the outside of MV trap and landed on the shed door. I potted it up, expecting it to be elongella or stigmella. It wasn't, and I was puzzled as it didn't look familiar at all. Duly fridged, I thought nothing more of it until I got home to photograph it .... 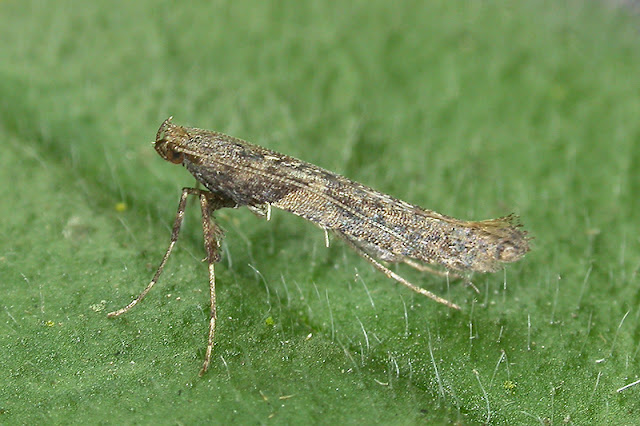 A quick review of web images and books, and I had the ID - Caloptilia falconipennella, albeit a worn one. Possibly rare, possibly overlooked. Mines Alder - like the big tall tree on the neighbour's front overhanging the embankment. It's a British, County and Garden tick all in one for me - and better still it's a first for VC55. Glad I bothered!

The rest of the catch was rubbish (apart from a yeartick Twenty-plume Moth and another spring Dark Chestnut - you wait for years and then ....).

Don't really understand moths & creepy crawlies but any county first has to be good no matter what the species, well done mate!

Yeah, well done Mark. Caloptilia along with many other micros are a nightmare at staying still, even after being fridged.

Well done on a County first Mark! a pretty non-descript moth other than that, bless it!

Paul - the county firsts have been few and far between in the last couple of years. It's not so long ago that I could add a few new micros every year.

Dean - I find the Caloptilia spp. can be a pain like other micros, but once they are sat/stood still they can be okay for a few minutes.

Ben - big or small, dull or gawdy, always good to see something new (but I would prefer big and gawdy to small and dull!).

Nice one Mark, I like those Caloptilias. Must keep a look out...

Hello.
I started to write blog in English.
I will write about everything, will be a lot of pictures, reviews of books, films, songs etc.
So it would be nice if you visit my blog sometimes :)
(Sorry for mistakes, I'm still learning English)
http://bianchii.blogspot.com
(you can follow me)