On the patch - Jubilee Park

Nipped out early this evening after work for a bit of pseudo-birding with Alex in tow. I wanted to refresh my memory on what Jubilee Park looks like, as this is another section of my adopted Soar Valley South patch, and Alex wanted to go on the kids play area. The southern half of the park (1) is a grassy floodplain with sallow/osier clumps and a few small trees and bushes. The northern half (2) is more of a playing field (with kids play area on the western side). The park is flanked to the west by a lightly wooded copse/scrub and gardens (3), and to the east by the River Soar (4). The River Sence joins the Soar in the southern section (5). There is a fairly large floodwater pond (6) which looks to be a regular feature now (certainly wasn't there when I first went there a good few years ago). The land to the east and north of the pond is all rough pasture, and is basically the same general area as seen from the corner of the Grand Union Canal (8) when following Route 1. 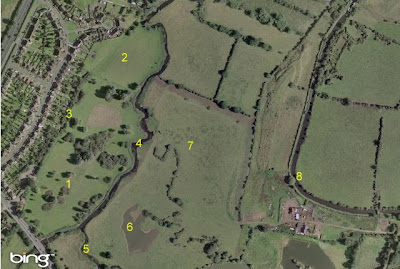 The light was crap so I'll take a few shots from around the park when I next visit, but here are a couple of the River Soar for the sake of it (it is the Soar Valley after all). 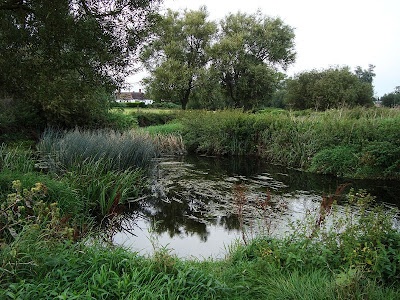 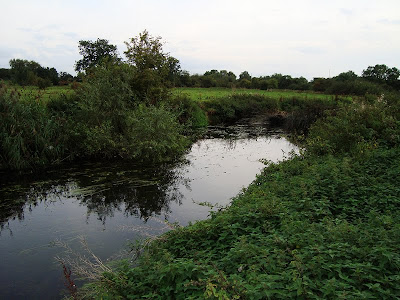 What did I see? Well, pretty much bugger all apart from a few dog walkers, a couple of fishermen and a load of Canada Geese. A flyover Sparrowhawk was the best bird, a calling Great Spotted Woodpecker was elusive, and the pond had a few Mallards. The only other moderately interesting thing was a stream of Jackdaws flying in from the north west to roost in trees near the pond - at least 50 came in. I reckon a very thorough check of the area in the early morning would only take an hour and a half. As the autumn progresses I am genuinely hopeful of getting into some sort of patch routine - it's never going to be daily though, a weekly visit to one or other section of the patch is more realistic. 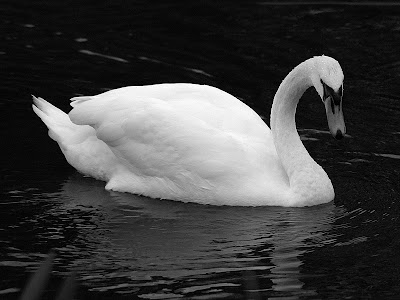 "...bugger all apart from a few dog walkers, a couple of fishermen and a load of Canada Geese" - exactly the same as the rest of the Soar valley then...

Quite probably. Apart from the Soar Valley Sorth hasn't got loads of gravel pits and wader-friendly scrapes....
I forgot to mention the little bags of dog shit hanging from bushes.