From the trap and down the lane

I wasn't expecting too much from the garden traps last night as it has not been that mild and was still very breezy - and both traps looked a bit dead by the time I went to bed. However, going through them this morning, actinic first, on the second egg tray I found this: 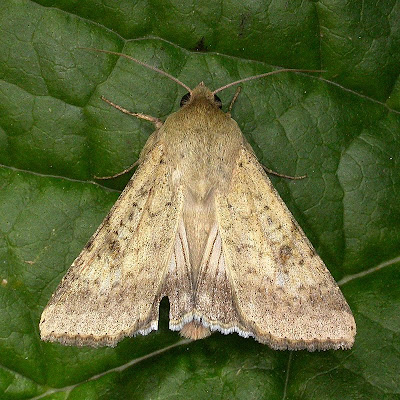 Superb - a migrant Scarce Bordered Straw, the second wild one for the garden (I reared one from a larva found on cut flowers a few years ago). The rest of the trap wasn't so exciting, and the MV was rubbish. In fact, the MV was so rubbish I've chucked the bulb and fitted a new one to see if that helps next time out. 05/09/2009 - Total catch 99 of 21sp. (125W MV 23 of 9sp., 80W actinic 76 of 17 sp.) First for year in garden: Scarce Bordered Straw (Helicoverpa armigera) 1 Highest counts: Large Yellow Underwing (Noctua pronuba) 28 Lesser Yellow Underwing (Noctua comes) 24 Light Brown Apple Moth (Epiphyas postvittana) 12 Other highlights: Vine's Rustic (Hoplodrina ambigua) 1 Gold Spot (Plusia festucae) 3 Silver Y (Autographa gamma) 6 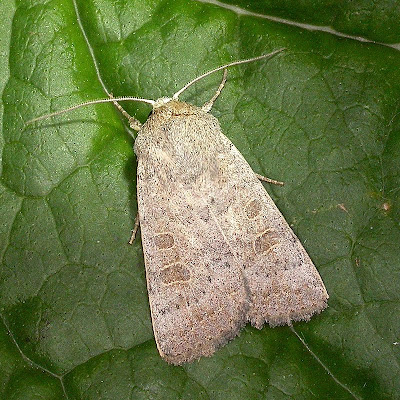 Vine's Rustic A bit later in the morning, I nipped out for a walk down the lane to collect some fresh nettle for these: 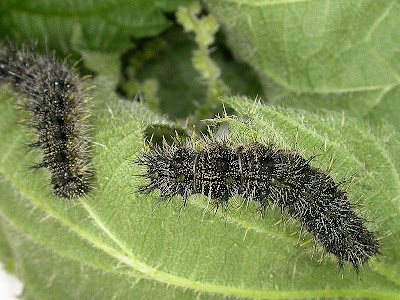 Small Tortoiseshell from yesterday's walk. I've not reared any butterfly larvae before so hopefully approaching it the same way as I do for moths will work. All being well they should pupate and emerge before the end of the autumn (they overwinter as adults from the second brood). Whilst browsing the undergrowth, I found this larva:

Dot Moth - another one to try and rear through Bird-wise, a really smart juv Lesser Whitethroat flitting about in a hawthorn hedge was the clear winner on the interest stakes down the lane. A field that was being ploughed had already attracted a gathering of c40 Lesser Black-backed Gulls and assorted corvids, whilst a stubble field held c50 Woodpigeons but nothing else. Still plenty of Swallows and House Martins in evidence. Just as I left the lane and came back into the estate, I noticed a very large moth roosting on the garden wall of the first house in. Close inspection confirmed the expected Red Underwing. 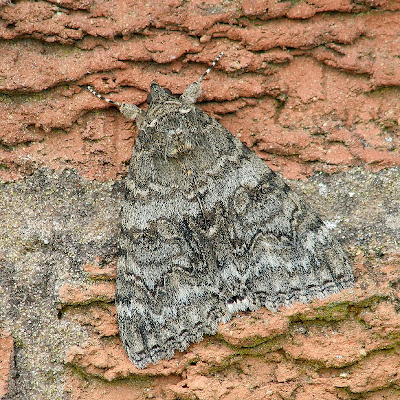 Good job on the Scarce Bordered Straw, yours looks totally different from one that I trapped, apparently a very variable species, and quite a rarity around these parts.

Thanks Dean - they are feeding well at the moment, I think I just need to sort out a more suitable box for them before they form their chrysalis.

Yes Ben - quite variable, I have seen darker ones but most I've seen are this lighter form. Still a good catch here in VC55, though the rarity value decreased in 2006 when we had a major influx.

Interesting that your MV catch was poor, Mark - I put my traps out last night (7th) for the first time in about 2 weeks. They were both pretty crap (i.e. just loads of LYUs, Square-spot Rustics etc), but the MV was particularly poor compared to the actinic - about a quarter of the number of moths. Perhaps my bulb is getting old as well - I can't remember the last time I changed it!

The MV has picked up markedly the last two nights Andy since I changed the bulb. Definitely feel it was a contributing factor. Ironically I think I last changed it around autumn 2006 during the Scarce Bordered Straw influx.