Amongst the moths on Saturday night at Dungeness, we also took c10 of these .. 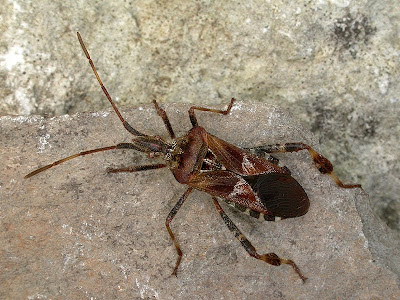 Western Conifer Seed Bug I was pleased to see it in one repsect (interesting looking species, still a bit rare, appears to be getting here through immigration) but it was also a bad sign (non-European adventive species, destructive pest, illegal to knowingly release). I've therefore considered it as both a mothing mate and a mothing villain (look back through the label links if you missed what this was all about). This is a native species in western USA that arrived in Italy with timber in 1999. It has taken hold and started to spread through Europe, reaching the UK for the first time in 2007 (Weymouth, Dorset) with several taken at coastal stations in 2008 (mainly in moth traps during periods of immigration I believe). Taking one on Saturday would have been interesting, taking c10 is worrying!
Posted by Skev at 22:04

A monster of a squashbug and all sightings are still to be reported to DEFRA so they can presumably plan some Ruddy Duckesque cull.....

You'd better pin this one then !
KT

This one is on its way to the Leics Museum Collection as reference 'material'.
Quite probably is reportable to DEFRA/FERA - if only the website was more helpful in advising what to report and how to report it .....