The invasive alien Horse Chestnut Leaf-miner was first recorded in VC55 in late 2005 at one site. During 2006, it started to appear at further widespread sites in the county but still at a fairly low level - you had to look but once you found an infested area the local trees were all affected. This year it seems more likely that you would have to search for somewhere that doesn't have infested trees. I've seen them everywhere. This particular tree on the edge of our estate is heavily infested - yet there are plenty of conkers so maybe the moths are not too destructive. 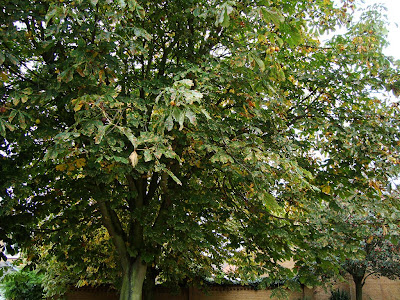 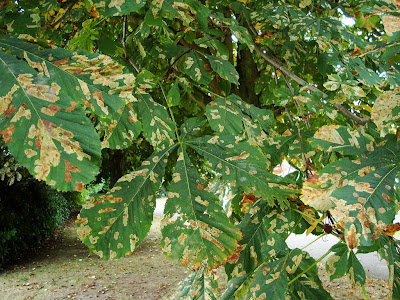 Multiple mines on each lobe - some merging into each other It's only 7 years since the species was first detected in the UK - it won't be too long before it reaches the far south-west and north. It's been suggested that on the continent some populations have stabilised c10 years after colonisation. However it has also started mining Sycamore and Norway Maple so maybe it will just keep jumping hosts!
Posted by Skev at 22:20

There's a very similar example in the gardens near to Belgrave Hall. Quite a sight

It's a bugger if they've switched to Sycamores. I know that conservation bodies hate them because they're non native but pyhlloscs and Flycatchers love them for the insects they attract. Hence I quite like the old sycamore.