When I were a lad at school in Leicester, we really only played football. It was a reputable inner-city comprehensive (reputable as in having a reputation, not necessarily a good one) with a staunch working class population - rugby union was largely considered to be a toffs game which involved men chasing men, grabbing their legs and sticking their heads up each others arses. Rugby League was simply something that northerners played. Little wonder then that I never really took any great interest in either code.
In more recent years I have come to realise that this perception of the game as a whole was misguided. I still find most of the rules incomprehensible and the stuttering nature of some of the play a bit boring, but there are two things that make attending a rugby fixture more enjoyable these days than going to a Premiership or Championship football match: drinking in the stadium is not only allowed, it is almost encouraged, and there is still a standing terrace. Great.
All the better then when I am treated to corporate hospitality involving a three course meal, free beer/drink and the match ticket. Like today when Leicester Tigers were at home to Sale Sharks. During the course of the 'six pints & two large glasses of red' afternoon we watched what turned out to be the dullest game of rugby imaginable, and sadly Tigers lost out to a last minute try by that French neanderthal Chabal. For a more detailed and accurate match report see here.
Seeing as the famous Welford Road stadium is scheduled to undergo a major transformation over the next couple of years I also took a small digital compact to get a few shots for the memories and of the game - click for bigger versions. 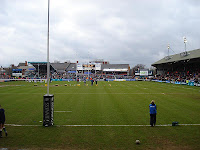 Looking down the ground from the Alliance and Leicester stand on Welford Road. The Next Stand is on the right. 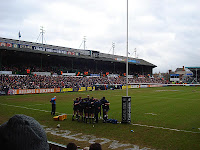 The Crumbie Stand with the terracing. The new stadium will retain a standing terrace. 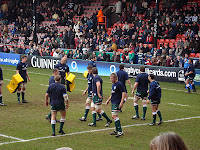 Corry and the boys warm-up. Notice that most appear to have thigh injuries requiring bandaging. 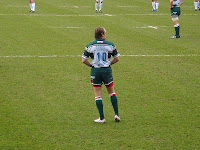 Before the start, Andy Goode practises his ball-handling skills and hopes that the c17000 crowd isn't watching. 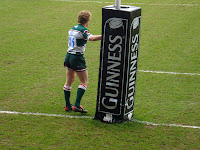 Sam Vesty decides to spend the game leaning on the post. 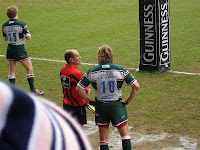 Goode points out to the touchline judge that his tight red undershorts match his shirt, and would he like to join the team bath later on. Probably. 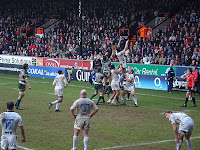 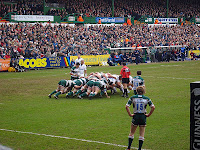 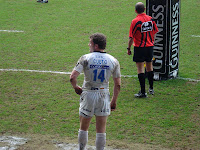 Mark Cunto seems to be distracted. You'd think he'd notice his name was spelt wrong on his shirt. 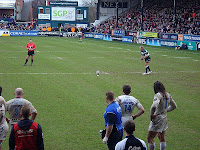 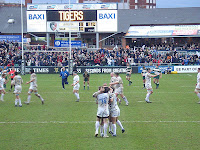