Back in the late 80s/early 90s, when iNDUSTRiE were going strong, one of our sources of inspiration was our various favourite films. Typically we'd take samples of key dialogue and weave them (or more accurately shove them) into the music. One of the classics that we were playing during live sets around 1990 was a track called Travis Bickle. The title is, for any philistines out there, taken from the Robert De Niro character in the classic film Taxi Driver. 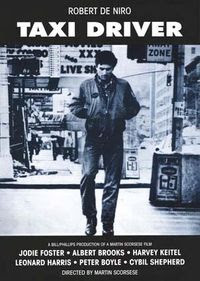 All the animals come out at night .. thank God for the rain .. 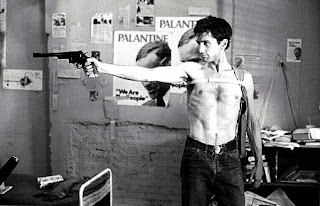 Travis Bickle - You talking to me?

I've recently been pissing around with software that takes an audio input (like old tapes and vinyl) and records it as a .wav file, gives tools to clean up hiss and crackle and save. I can then import into i-Tunes and convert to .mp3. This track is a dark brash industrial-techno crossover that sounds like it was recorded in a bedroom on an analogue four-track. Cause it was.
Posted by Skev at 23:01

Mark, as you know I am something of an authority on electronic music and that was mega ! Time to reform m'thinks.....It worked for Take That... Why not for Leicester's answer to Front 242?

Thanks Russ - nice to know someone appreciates the work we put in all those years ago. I'm sure you would have enjoyed the gigs at The Charlotte, Magazine etc. Shame the music industry didn't appreciate the demos we sent though!

Glad you liked it. Hope you sang along.