Remember that Psychid case that I found at Ketton Quarry just over a week ago on 29/03/2019? Well bugger me it produced this morning. Whilst this is sometimes good, with Psychidae it can be a bit 50-50 as to whether it's going to be something exciting to look at or not. And in this instance the case produced an apterous little grub-like thing ....... 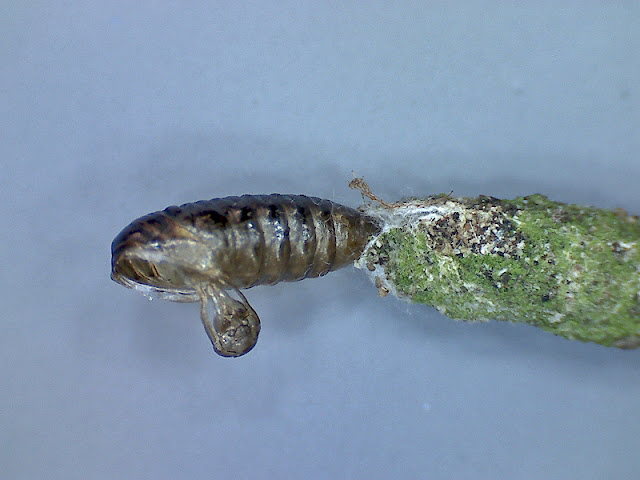 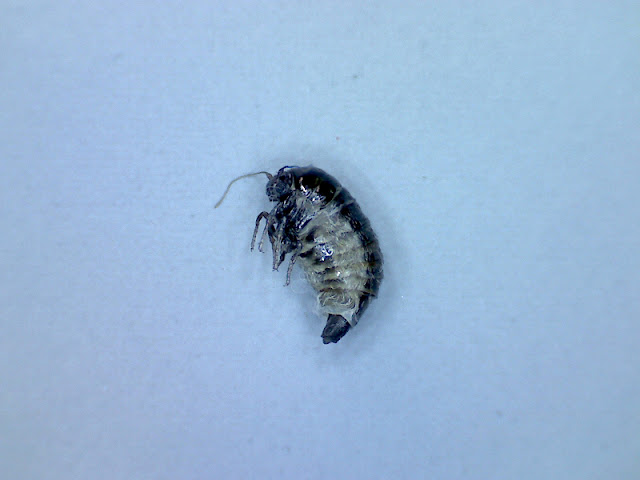 Yes, that is a fully grown adult female moth ....

Still, that in itself confirmed that it cannot possibly be Diplodoma laichartingella or Narycia duplicella as both of those species have fully-winged females. Going back to the case also excludes three other likely (for VC55) species: Luffia lapidella f. ferchaultella, Psyche casta and Taleporia tubulosa. Here it is again, c5.5mm in length, triangular and very slightly tapered at both ends, covered in granular material and fragments of lichen/algae. 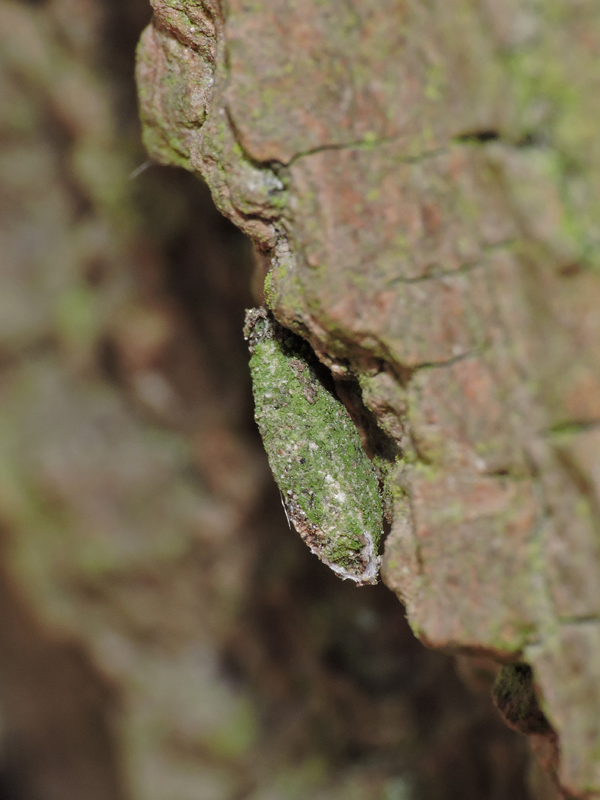 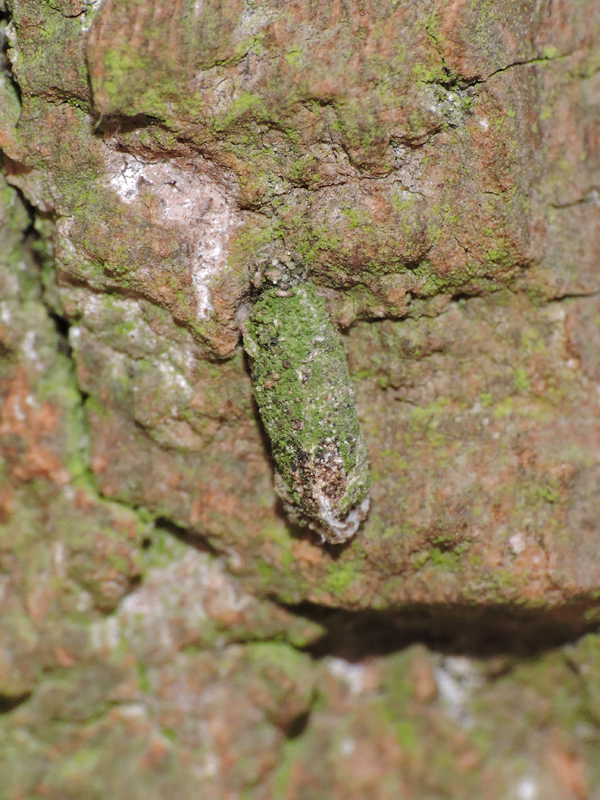 The only other group of Psychidae that have been recorded in VC55 are the Dahlica spp. I've only seen these at one site in the county, and there the cases do look similar to this with the exception that they are invariably not so obviously covered in lichen/algae - tending to look more 'sandy' overall. But that is highly likely to be pertinent to the location and substrate rather than being a clear ID feature. Before considering the Dahlica spp. any further, maybe I should think about other non-VC55 Psychidae.

* even for Psychidae, the apterous females in some species go one further by having pretty much no legs or antennae, and it's thought that these extremely maggot-like species disperse by being eaten, digested and shat out by birds with the eggs surviving the journey!

There are a couple of other species:
So having exluded nearly everything, all there is left (on the assumption that it is not new to the UK/science!) are the Dahlica spp. I have seen and reared both Dahlica lichenella and Dahlica triquetrella, both from the dam wall at Swithland Reservoir. Both of these species are parthenogentic (no males) with apterous females that emerge and pretty much immediately start laying eggs within the case and die and shrivel up within a few hours of doing that. There is one other species, Dahlica inconspicuella, which until 28/03/2019 (yes, the day before I found this case) did not exist on the VC55 list. In this species the male is winged, and a group of recorders found males flying about at Charnwood Lodge. 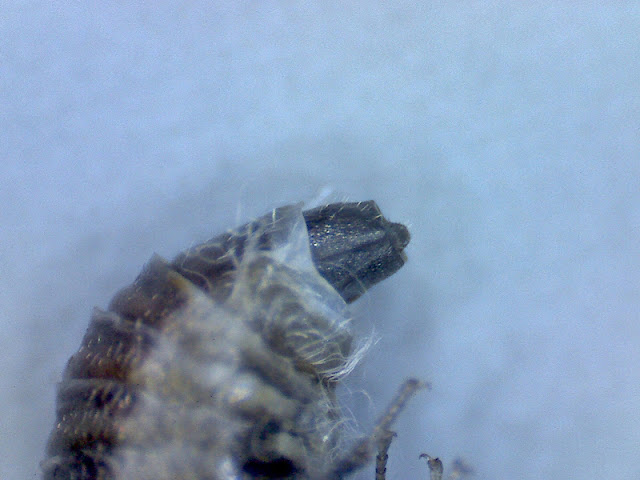 No spines on segment 8 before ovipositor 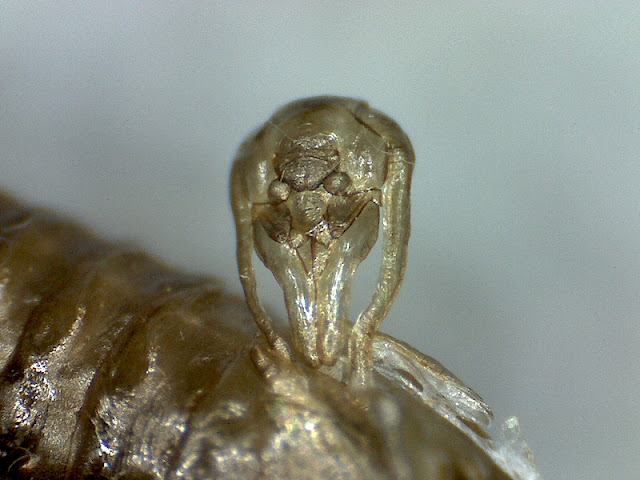 The other odd thing about this female is that I found it wandering about on the tissue paper in the pot, not sitting on the case. It also seems to be constantly pumping it's back end. If I was a betting man, I would say that it is exuding pheremones to attract a male .... something that would be entirely pointless for lichenella!


It is still alive and kicking now doing the same, and I've seen no evidence of egg-laying. I am as convinced as I can be that this is in fact Dahlica inconspicuella ..... but. I can't find any references anywhere to whether gen. det. preps of Psychidae females are available for comparison, and I can't find any reliable references showing what the pupal exuviae headplate should look like for inconspicuella. For the moment I will hang on to the female and see what it does, and I'll also hang on to the case. If I am wrong and this is in fact lichenella, then in a few weeks I'll have lots of very tiny larvae piddling about in the small glass dish the case and female are now in.
Posted by Skev at 21:07

Hi - There is an article on Eakring birds with the headplate shown. Regards Martin Gray

This is the link - http://www.eakringbirds.com/eakringbirds2/mothspsychids.htm

Thanks Martin, I had seen that image but it's not really clear enough to see what (if any) differences there are vs lichenella. Only obvious difference is in apparent length of antennae, but as the number of segments (and I guess therefore antennal length) is variable in both species with a bit of overlap I'm not sure if that is reliable. MBGBI shows differences between triquetrella and lichenella only, I guess the collective wisdom is that if you have inconspicuella you'll find/rear the males.