This morning saw a watershed moment in the life of my old Peugeot 106, otherwise known as the moth-mobile. After 8 years and 41K miles of exemplary service it is no longer in my possession. It will soon be enjoying the stiff sea-breeze and salty air in South Shields where my brother lives - he's having it as a cheap run-around (or at least that what he's telling everyone, although I think he'll be using it whilst saving up for another big motorbike at the risk of divorce!). 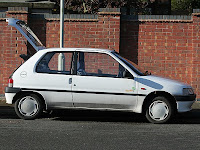 The car was initially a run-around for Nichola, so it was rarely called upon whilst I was birding when we first got it although it has been on a couple of twitches. I started using it a while after we had Josh and Nichola needed our other car for day-to-day use (which was a pain at first, going from a 2.5V6 fully loaded Vectra to a tin-pot with a lawn-mower engine).

However it was soon leading a double-life - cheap commute to work car by day and moth-mobile by night. This little car has seen far more off-road service than most 4x4s around today, with regular sorties through woodlands, heaths and quarries to deploy traps. The cavernous boot was always full to the brim with cable-reels and other paraphernalia, and with the back seat folded down it was amazing how much stuff you could pile in. The most was five traps, two gennies, sheet kit, catch box and cable reels along with sleeping bag, rucksack, boxes of pots and bits, tripod and net. 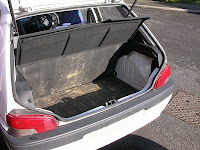 The back seat in itself was often in use as a bed during over-night mothing sessions. A cramped and bloody uncomfortable bed. 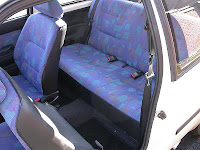 I will miss the cheap running and the way that the drivers seat sometimes unilaterally slid back when pulling into a roundabout. But now it is gone, off to the sea-side, very apt for the decals that I always hated. 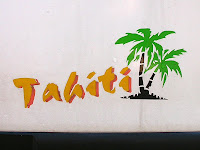 We'll all miss the little white moth-mobile. Our Bee-hawk trip sticks in my mind in particular - couldn't lose the bugger no matterhow hard I tried :-)

Too true Keith - it did me proud on that trip. A over-night session in superb Northants woodland, followed by a very early morning dash to Dorset, back to the Dorset/Wiltshire heathland, back to the coast for more over-night trapping and then home via tick infested Shapwick Heath. Some bloody good moths whilst we were at it as well. A few mod cons and air-con would have been appreciated though. And a comfortable driving/sleeping position!