A late morning appointment gave the opportunity to nip over to Beacon Hill to look for the three Ring Ouzels found this morning by Andy Cliff. In the meantime at least two local birders had failed to re-locate the birds, but I thought I'd try anyway. Almost immediately, I picked one up perched right at the top of a large hawthorn tree. Scanning further across I picked up another bird on the deck, but looking back the hawthorn bird was now gone so not sure if one or two birds involved. Whilst watching the bird on the deck Andy Cliff re-appeared. In photographic terms, this bird would best be described as 'prohibitively distant'! 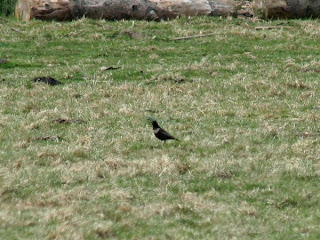 Good to see Ouzels in the county again - April 2000 was the last time for me when 3 males and 1 female were on Bardon Hill on 16th. Hopefully these birds today will herald a few more over the coming week.

Also in the same field, apart from the long-horn cattle, was one male and two female Wheatears. Again, they were not close but nice to catch up with these for the year. 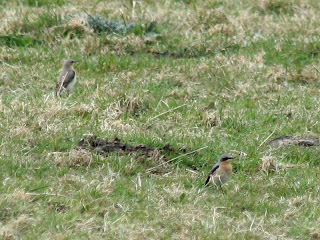 Nice male getting the cold shoulder.
Posted by Skev at 19:31