Do not feel obliged to click on any of the hyperlinks!

Christmas 1983 - what did you get? Back then my interests included music and girls; natural history was something I enjoyed on the telly, but never experienced or looked for in the real world.

Christmas 1983 I was 15, and I know exactly what I got; a particularly special present that I'd clamoured for and that my parents must have felt was worth saving for. Expensive presents were not the norm in my happy childhood, I must have been a very good boy that year! It was one of these ....

The iconic Roland SH-101; a truly excellent monophonic analog synth with built in step-sequencer, Gate in/out and - best of all, a separate modulator hand grip so you could hang it with a strap like a guitar and look like a real synth-wanker. It came in grey initially, with red and blue models to follow. It only had a single oscillator, and in the great scheme of things was about as basic a synth as you could get even then. But it sounded brilliant, especially for snappy bass sounds and squelchy leads. This cost c£240 back then, a fair chunk; a decent condition one now costs £900-£1200. With heavy heart I sold mine for £250 in c1996 when I needed the money more than what was by then an obsolete and not much use to me 'gadget', before the term vintage applied and retro gear costs escalated rapidly.
This was desired as part of a plan involving a mate Kev and his cousin Liam. We'd already got some very basic keyboards (not synths), including the ridiculously popular Casio VL-Tone which (literally) was a calculator with a built in 2.5 octave keyboard, some tinkly sounds on it and a some basic rhythms (remember Da Da Da by Trio - based on a VL-Tone with some additional guitar and shit vocals, also the track Get Carter on Human League's Dare album is a VL-Tone). Anyway, around the same time that I was truly creaming my pants on finding the SH-101 was before me, Liam was enjoying the same feeling whilst Kev was going one better. He got one of these .... 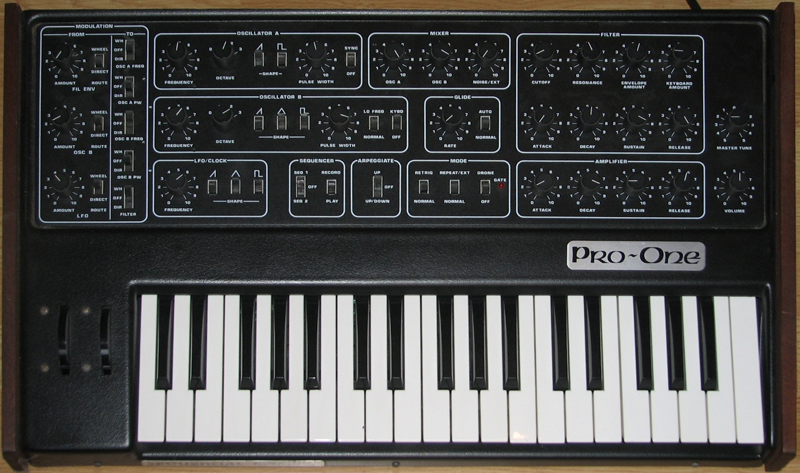 Wow - look a the knobs on that. The equally iconic and in many ways more capable Sequential Circuits PRO-ONE; also monophonic, with two oscillators that could be detuned, big beefy analog sounds, again a built-in step sequencer and Gate in/out. But no grip, wooden frame and reduced synth-wanker potential. I think these were c£350 back then; you might pick one up for c£1800 now ....
With the acquisition of these three synths, we set about becoming a globally renowned electronic band. That was the plan anyway. Within a short time we'd saved and added a couple of key items to get us going properly .....

The Roland TR-606 'Drumatix'. At the time this small box was the tinniest and crapiest drum machine you could imagine, but it was affordable for us and - crucially - it could be used to sync all three synths and the drum machine together through the gates to keep in time. We used the step-sequencers to run basslines, arpeggios and simple sequences over a series of programmable electro-drum patterns, and it was a thing of spellbinding beauty. With the one exception that none of the synths had the ability to 'save' sounds or sequences etc. Every time we wanted to do something it was start from scratch and run it all again. Until we got this .... 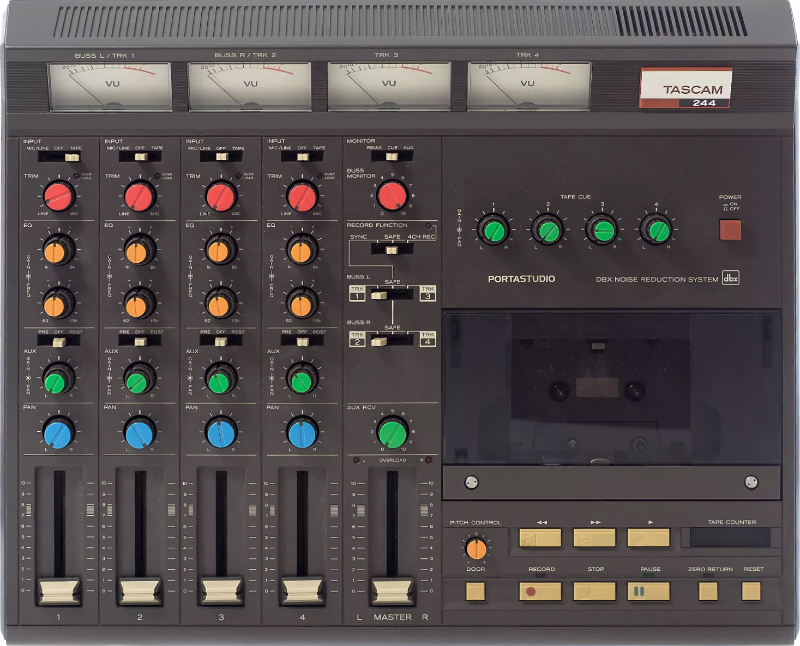 The Tascam 244 Portastudio - a four-track cassette machine. It used both sides of the tape from the same direction, with each stereo channel on each side becoming one track. It allowed us to record the drums, bass and backings and then to play over as a more finished track. Importantly, we always used one track to record a sync signal so we could add further sequences timed in with the existing tracks. It also allowed us to 'bounce' tracks, so we could mix two tracks to one and add another allowing us to record demos. With this, and a couple of basic Boss foot pedals for delay and reverb, we were set for some great times creating sounds, crafting our songs, recording backings and eventually playing a few gigs. And locally there was no-one else doing this in the same way at the time; I'm sure other bands had synths that were played with other instruments but it was another couple of years or more before we had other local electronic bands. Later in our journey we played alongside other bands in all-electronic nights.
Before I go further we picked up another, older, monophonic analog synth in the early days that is worth a mention too .... 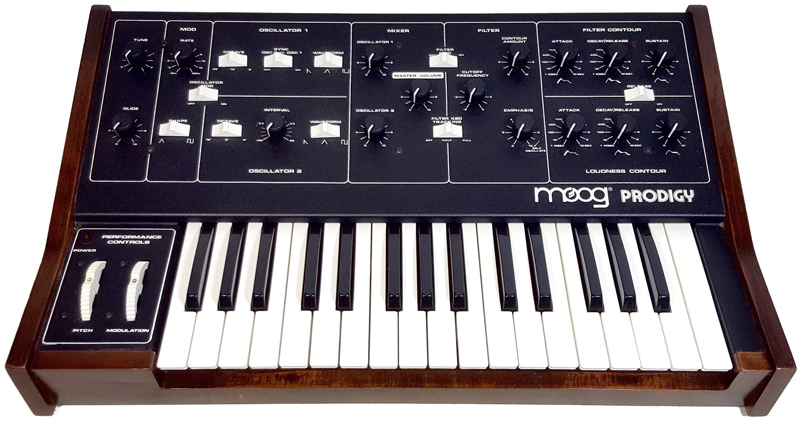 The Moog Prodigy, the source of the name for the band The Prodigy ... which is exactly what we had called ourselves seven years earlier before we got the proper synths and became The Red Branch.

But it was a time of technical revolution. The synths we had were already a world away from the patch/matrix synths of the late 70s, and increasingly affordable and accessible. But equipment was superseded and obsolete within a couple of years. Or months! Right at the start of our journey, MIDI was in its infancy and only included on absolute top-end gear, but soon became the industry standard. FM synthesis was new enough that no one outside of the professional world knew much about it, until the DX-7 was all over Top of the Pops. Sampling was new in the mid-80s, multi-faceted workstation synths came along, direct to hard disk recording etc etc. Our journey became more of a race to keep up than being the next global electro phenomenon.
Our growing list of equipment included: Roland TR-707 drum machine - with MIDI and gate outputs which allowed us to run analog and digital together; x2 Yamaha CX-5M computer systems which were basically half a DX-7 FM synth in a box with some sequencing software and MIDI; DX-27 FM synth; Kawai K1 digital synth; Akai s612 single-shot sampling rack; Prophet 2000 multitimbral sampling synth. Our last major purchases were the Akai s2800 sampling rack and a Roland MC-50 step sequencer (which replaced the CX-5Ms). With these two, along with a Roland DEP-5 effects rack, we could effectively create and record a whole track in one go using nothing else as the sampler was multi-voice and the sequencer held multiple patterns and tracks - like a modern computer based DAW in that respect. And we could save everything to disk. We gained control, but lost the soul.
So, what's all this nostalgic techno-bollocks all about then.
Every now and then I get an unnaturally intense feeling that I should be searching online to see if the prices of some of the properly capable vintage analog poly synths are dropping. In particular, I would massively like to own either of these beasts:

The flagship Jupiter 8. Sliders, buttons, massive sounds. Which last time I looked was going to cost the best part of £12000. Or one of these maybe ....

The Sequential Circuits Prophet-5, like a polyphonic PRO-ONE but way better than that. A slightly less eye-watering £3000 - £4000 ish.
But then I have a moment of clarity. Maybe the nostalgia is rose-tinted, the sounds are retro, the synths themselves are bigger than I have space for and - most importantly - they can't really do anything that I can't recreate on the desktop through FL Studio and virtual studio technology (VST) plug-in synths. In fact, I have working demo versions of both of the above classics that I can create sounds and record into Audacity, and then load into a VST sampler to use. For free. With no more space than the PC keyboard. Even if I put that to one side and went for it, why spend £12K on a vintage Jupiter 8 when Roland have recently launched the Jupiter X - which is like having x4 Jupiter 8s and other synths wrapped up in a keyboard package that looks like the real thing but is essentially a number of VSTs in a big box with a keyboard. For c£1700.
And anyway, modern synths are nothing like they used to be; they use a variety of wavetable, digital, virtual analog, formant, sampling and any mix of these generators to create much bigger sounds than were possible before. There are even synths that will use a 'picture' as the basis for an editable sound. Here's a demo of a VST synth I downloaded today as an example: 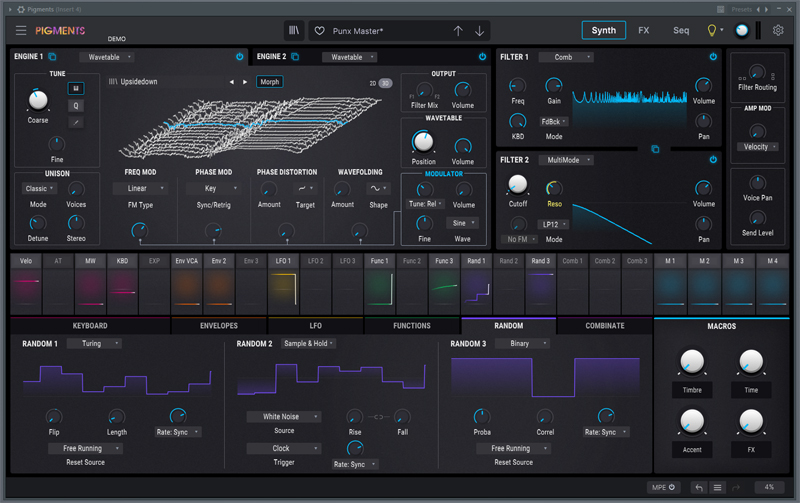 Arturia Pigments: colourful, powerful, virtual. No physical knobs.
I'm sure the sun will come out soon and I'll have something to photograph and take my mind of other nonsense, but today after catching up with work I've had a great time just playing with creating sounds. Relaxing for me, probably aural torture for anyone else in the house.
Here's a proper synth-wanker, on a track that largely uses (probably several) SH-101s for the synth and bass parts (though not the way he's posing with it ....).
Posted by Skev at 23:07

My mate J, who I think must be about a year older than you, used to bore me silly whenever he'd get drunk and start whaffling on about his beloved 80s synth. I definitely remember the words organic and analogue being used quite a lot. I think I strangled a tune out of a Recorder once, when I was about ten years old. Musical I ain't.

However, one listen to Nobody's Diary has decided the rest of my evening's listening. Vince Clark is a legend, 44 seconds into that track and the goose-bumps started! Think I'll start with his album The Circus...

I inherently like your mate J, who I've never met. Vince - creative genius until/excluding Erasure when he apparently forgot about his uncertainty about pop stardom. We bumped into him at a Kraftwerk gig; Liam was greased, and exclaimed 'Vince, Don't Go was brilliant but now you're shit!' - the minders moved us on quickly 🤣

Haha, class! My Bulgarian housemate just asked me "wat fukk you listen at now?" I don't think bands like Yazoo or Erasure are legal in 'his' country :D

Prodigy now, Fat of the Land. Seems to have mollified my housemate too, he's still casting me the occasional wary glance though :)

Haha, but no. There's one thing I really dislike about Bulgarians (yep, just one!) Crocs. They all wear crocs. This means they can merrily get wankered and miss the toilet bowl when they pee. See me - I walk around barefoot of an evening. You have any idea how much Bulgarian pee I need to dodge just to take a leak? Meh.

Great post, I had the occasional fiddle with friends' knobs but never bit the bullet and owned any of this stuff myself. Sort of wish I had experimented more but now I'm too old and if I had the ££ would go Leica rather than Roland!!

I think my parents realised my interest in synths was not just a fad; I used to watch Top of the Pops and spent as much time remarking about what synths various bands had as much as the music. Earlier in 1983, one of my Dad's mates brought round a Moog Rogue (no idea why he had one) and let me have it for a couple of weeks to fiddle with - hooked from that moment. But yes, I have far more potential to buy gear now than in the 80s/90s, but if I was going to splash £10K+ on something from the 80s it would be a pimped up rally spec Audi Quattro 🤣