Yesterday was gloriously spring-like in the morning, and not too bad in the afternoon either. Warm, sunny, light breeze, perfect for getting out. I was busy. Today ... meh, wet, wild and windy. In between a return to college-taxi duties, I noted this on the front of the house: 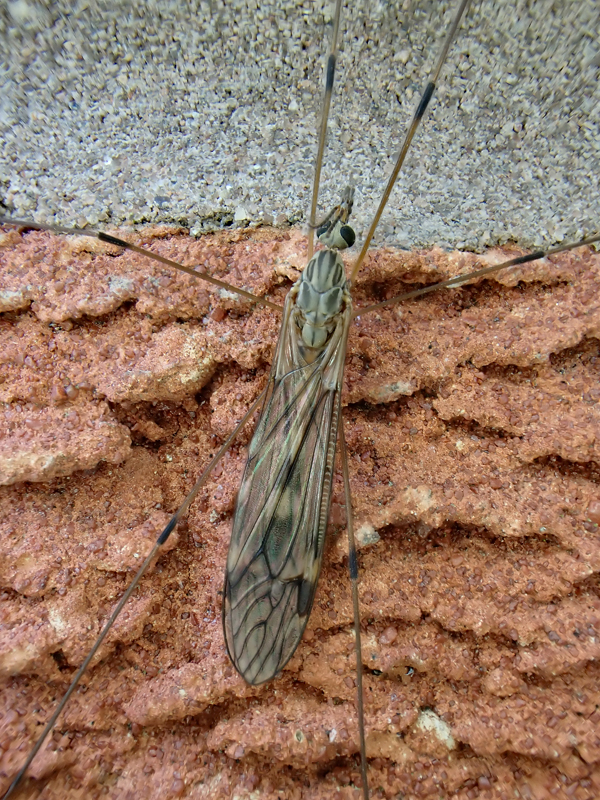 One of those oddly leggy things that by virtue of having halteres qualifies as a fly. By the way, can you imagine how truly horrifying that 80s film would have been if Jeff Goldblum had morphed into a giant leggy twat with massive palps. He is quite tall .... Anyway.
A Tipula sp. There are a few very similar species, of which I tend to see one earlier in the year and one later. Or at least I believe I do, I don't look at enough of them critically to be certain. A quick check from the side should confirm .... ... a nice clear and obvious dark line on the side of the thorax from the neck to below the wing, which should be enough to declare this is Tipula rufina. I'm not going to pretend I keyed it all the way, I already knew what it could/should be.
A bloke that I'd never heard of died today, but whose work had a major impact on the lives of many of us that are a certain age. Lou Ottens, the lead inventor of a nifty recording device - the tape/cassette. Imagine how different life would be not having experienced the massive adrenaline rush when you pushed the buttons bang on time to record the latest pop smash without getting the radio DJ voice spoiling it ... it'd be like living in my kids generation where everything happens by magic and no one gives a shit about how it happened.
Posted by Skev at 21:15

I can't wait until I can Pete! I've got that single somewhere, with Annabella naked on the cover and in no way being exploited as a teenager by Malcolm McLaren...