The Vagaries of British Lepidopteran Taxonomy

Despite the post title, this is primarily a review of the recently published Field Guide to the Micro Moths of Great Britain and Ireland - published by BWP, authored by Phil Sterling and Mark Parsons, and illustrated by Richard Lewington. 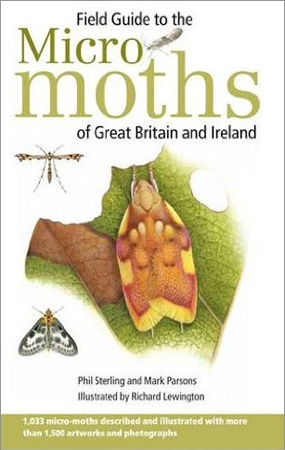 In February I posted a bit of a personal gripe about  'new vernaculars', and in particular I made reference to this (as-then impending) publication as being a watershed moment. Back in May whilst down in West Sussex for the pan-species listers get together, I was impressed and jealous when a freshly published and delivered copy of this guide was passed around and I got my first flick through, and I was then even more eagerly looking forward to my copy arriving. I've had mine now for a couple of weeks, and given just how much this publication was anticipated I think some comment is overdue.

Immediate reaction to the book is that it is an impressive piece of work:

A couple of concerns I voiced in February have, happily, been allayed:

Firstly, on pages 9, 10 and 11 there are illustrations and text showing and explaining the named anatomy of micros. Apparently, unlike for the macros, we are capable of understanding the proper names - no resorting to new dumbed down descriptions for tornal spots, costal streaks or tibial spurs.

Secondly, and most importantly, Porter's vernacular names have not been adopted. Hurrah. I hope that all subsequent publications follow suit, that various websites ditch them immediately and that MapMate never adds them in. I never want to see or hear anything about a Cock's-head Bell again. The only caveat to this is that the vernaculars that were introduced by Colin Hart for plumes have been adopted - but at least these are generally apt and do not leave you wondering what the hell it is (ie - they are all 'xyz Plume').

So - it's all good then? Overall I'd have to say yes. Clearly this book wasn't ever going to be as comprehensive as the MBGBI series and was never going to cover all micro species. Whether the various caveats and warnings within the texts are sufficient remains to be seen, but I guess county recorders will soon notice if recorders who have previously ignored micros suddenly start recording scarce or unlikely species.

However, I do have a problem with this new book and I think there have been a couple of serious opportunities missed which would have made it that bit closer to brilliant. The problem is the way that taxonomic changes have been handled ..... I'll come back to the book in a minute.


I think it is clear that, whether we like it or not, changes in taxonomy and systematic orders will persist. I find this as hugely frustrating as anyone and wish they'd just leave things be for a period of stabilisation but they keep meddling away. Bastards! Having to learn new generic and specific names is annoying, and having to look through lists in different orders takes a while to get used to. But for British Lepidoptera, these taxonomic changes are even more annoying because there is no universality in the way that they are adopted or applied.

The obvious example and comparison is with the British List for birds. Firstly there is a recognised body (BOU) that decides on, publishes and maintains the national list. Any changes to taxonomy and systematic order is announced and everyone can follow suit in a structured way - even if we do think the changes are stupid. As things stand, it is not at all clear who the custodian is for the British List for lepidoptera. The last published checklist was the Bradley checklist published back in 2000, but even that was a privately executed piece of work - an excellent one at that. 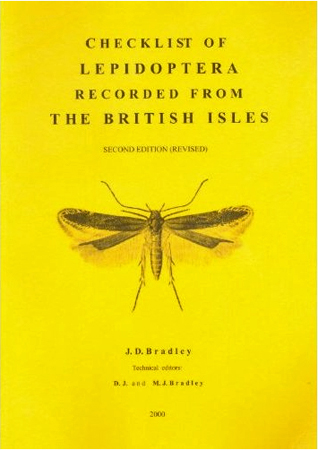 So where does the new Guide fit when it comes to taxonomic changes etc? The answer is that numerous changes to generic and specific names have been adopted, the systematic order is completely different to most of our current understanding and, most importantly, the new Guide is out of sync with the following widely utilised British references:
The new Guide largely follows the Fauna Europaea in a sort of hybrid approach with Bradley checklist. This means that annoyingly, for example, the plumes now come before tortrixes, the pyralids are split into two groups which are arse about face to Goater, half of the Oecopheridae are now actually part of the Elachistidae. We also now have long standing and familiar genera replaced or split up such as Eriocrania, Emmetia, Epiblema ........ genera starting with other letters are also affected. Whilst the systematics used within the Guide is explained, and whilst all of these changes may be valid and/or necessary, where I think the authors have seriously missed an opportunity is that the Guide does not in itself help to make them understood and cross-referable.

For example, you are a new recorder and:

you see what you think is Dyseriocrania subpurpurella - you go straight to UK Moths website to check for supporting images ... err?
you find Coptotriche marginea and want to enter the record on MapMate ... err?
you think you've found Notocelia incarnatana and want to cross-check it's national conservation status .... err?

Whilst the Guide does show the synonymy of Dyseriocrania subpurpurella to Eriocrania subpurpurella, Coptotriche marginea to Emmetia marginea and Notocelia incarnatana to Epiblema incarnatana, this is only within the small-print checklist at the back of the book and doesn't stand out. Surely it would have been very helpful and sensible to also clearly show this in the species account. It's not as if there is a printing space constraint as this would have easily fitted in each species header.

Secondly, that checklist at the back is also less valuable than it could have been: in the species accounts the Bradley & Fletcher number and the Karsholt and Razowski European Checklist number are given, but in the checklist which also includes all species not covered in the texts and plates the numbers are not given.

Whilst taxonomy is in such a state of flux, I think these two simple things would have made the Guide much more immediately useable and compatible with other existing references and works. As it stands, we will have a prolonged period where what will rapidly become the 'standard work' for many new recorders does not match the main recording database, on-line resource, national checklist and publication detailing the conservation status. Ultimately these changes will be much less of a problem and hinderence to long-standing micro recorders like myself - but I don't think the book is primarily aimed at us is it?
Posted by Skev at 16:59

That's a very good review Mark, I think you're point about the lack of numbering system(especially B/F)is something that could have easily been incorporated on the plates and the headed text. You never know, in another 100 years time there may be a standardised system.

Anyway, my main criticism of the book is the index. I'd much prefer a combined index, not a separate index of common names. All synonyms should be included in the index (they aren't) and you should be able to use the index to find a species when all you know is its specific name (you can't - you need to know its current generic name or you're stuffed).

I would've thought they'd have had a storm of protest over the indexes in Waring and Townsend (which are just the same) but obviously not. Ninnies.

I guess that you're right Mark and that MapMate etc will follow suit, eventually, but we're in for a confusing time inbetween.
Ultimately I think the ideal thing would be a Nationally controlled list that authors, publishers etc follow, rather than everyone tweaking and changing things unilaterally. But I don't think that's going to happen, and in any case who would the custodian be? Clearly Butterfly Conservation are not up to speed on the taxonomic changes adopted by Sterling & Parsons, and I wonder what systematic list the BNHM follows?

I just wish they'd all stop buggering about with taxonomic irrelevances that don't contribute to species ID and recording !

Clancy's soon-to-be-unleashed book will similarly mix up the macros too....

Yes - it probably will Keith. Only difference will be that there won't be the same surge to stick a £54 hardback on the shelf when c95% or more of the content is already adequately covered in other recent works (apart from the bloody name changes!).