Any parents out there will be familiar with the range of feelings that hit when your child is hurt. The initial overriding sense of concern whilst comforting said child gradually eases, only to be replaced by an irrational sense of guilt that maybe you could have prevented the accident. This is far worse for a father, as there is the additional burdon of having to explain to the mother why you let it happen (because by then it clearly was your fault entirely). I should know, having successfully overseen and dismissed Isabelle's broken arm when she was six!
And so to today; I'd taken Josh and Alex to the local indoor play area on the Meridian estate. This should have been straight-forward, despite the cacophony of c150 kids running, shouting and doing whilst my post Leffe Blonde, bottle of Rioja and double Macallan hangover kicked in. With only around 15 minutes to go, I am confronted by Alex bawling his little eyes out and bleeding profusely from the mouth. Great. A quick check confirmed that he had indeed managed to ruin his cheeky smile by dislodging one of his teeth away from his otherwise healthy gums. Seems he caught it on the side netting whilst falling and effectively tugged it out from its gummy home. It looked bloody painful as well. He soon recovered though and managed to pose with his broken tooth at a jaunty angle when we got home. 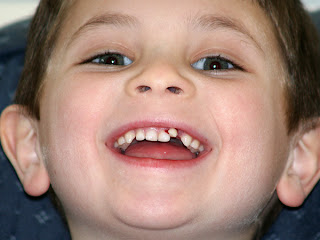 A visit to the dentist a couple of hours later (at least it was the same day) relieved him of this tooth and confirmed that there should be no problem for his forming big teeth. He's fine now, albeit looking like a Shane McGowan wannabe.
Posted by Skev at 20:09