Back in Leicestershire after the very enjoyable and knackering mini-break. Catching up on news and blogs last night I learnt about the Swithland Res. Lesser Scaup and thought I'd have a look sometime this week (April 2000 since I last saw this species in VC55). However, a phone call from Dave Gray about Common Scoters got me there this afternoon despite the less than ideal weather. I'd only seen one previous group in the County so was keen to see these birds.
As I drove along the causeway approach I could see Dave standing with his scope and tripod, attempting to digiscope. I blasted the car horn as I passed and much to my amusement this made Dave jump and reactively throw the Vs. I was still laughing when I got out the car a couple of minutes later.
Anyway, Dave was on a group of scroters, eight drakes and one female. After watching these for a bit, and showing Dave two of the Swithland Res. moth specialities - Luffia ferchaultella and Psyche casta - I moved on to Kinchley Lane.
I soon found the other group of Scoters (seven drakes), and also the long-staying pair of Smew (smart birds). Moving on to the dam I quickly picked up the drake Lesser Scaup, albeit very distantly. Moving back onto Kinchley Lane I eventually got good scope views of this bird, fairly clean looking but apparently a first-summer.
During the course of the afternoon I made several pathetic attempts at digiscoping - not the easiest thing to do hand-held, especially with no tripod for the scope (good job there are low walls all around the res.). 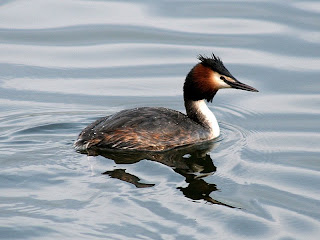 What are Scroters? Is that the new name for doggers?