I very rarely bother running my garden light traps after the end of October - seems a bit of a waste of time to empty an empty trap. I know there are still moths about, and others run their traps with some success through the year, but there really is no decent woodland close to my garden so the chances of pulling in something interesting are limited. Mottled Umber is a very good example of a generally common and widely distributed species that I haven't seen here - mainly due to the lack of mature oaks within a mile radius.
One species I tend to get frequently at domestic lighting and windows through the early winter is the aptly named Winter Moth. The winged male is extremely dull and lacks any exciting characteristics. Two appeared tonight at the kitchen window - the first here this winter. The following lazy snap is of the underside of one - the upperside of the wings is not much different! 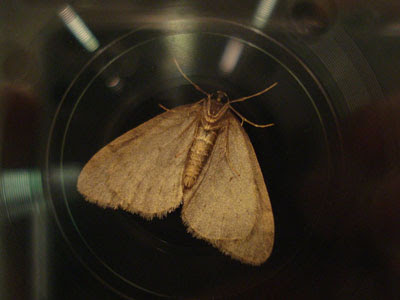 The female of this species is wingless - just looks like an egg-bound sack with 6 legs.
http://vc55moths.topcities.com/imagearchive/geometer/wintermoth.htm

22nd November is a typical date for this species to start appearing here, although I have a few records of individuals towards end of first week of November. 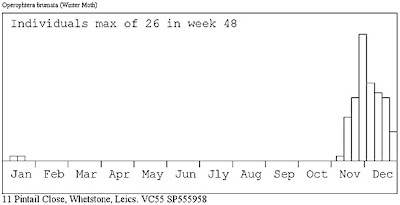