06:05 in the morning, still dark and a bit nippy, I found myself in the highly unfamiliar position of being in a car with John 'Hoylander' Hague and Dave 'Grayboy' Gray on our way to see a bird - the first time we'd travelled together on a birding day out since the 2001 Snowy Egret!
Our destination was Selsey Bill, and the target was the White-billed Diver that had been knocking around on and off for a while. I have to say that whilst the prospect of a days birding was appealing, and of course I was looking forward to a long-awaited tick, I have never really enjoyed seawatching. Once we'd arrived and got ourselves kitted up in the obligatory protective layers, the size of the task was obvious - miles of open choppy waters and a long shingly beach - my idea of birding hell. 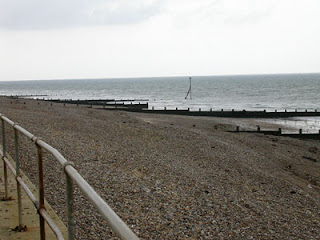 After a brief spell of scan-walk-scan, we merged with a group of like-minded birders. John eventually picked up a breeding plumaged diver and we were soon all scoping it albeit at some distance. As ever with seawatching, the conversation amongst the present birders deteriorated into the almost futile attempt to give directions to a dot in an open expanse of choppy water - at least one inept f.wit couldn't pick it up. The bird eventually showed why it is a White-billed Diver (I certainly won't ever be referring to it as a Yellow-billed Loon), but an outgoing trawler then cut across it - and it somehow vanished. We decided to walk further down the beach to try and get closer views but no further sign, so we decided to take a break for sustenance - a cardiac inducing full English at the High Street Cafe (and very good it was too).
Back out on the beach front but still no further sign of the diver, which was not seen again until a good two hours after we'd left. So, all in all very brief, distant and unsatisfying views - sums up most of my seawatching experiences! Other birds noted during the day included a superb Bonxie heading east, adult winter Med Gull directly over our heads in the car park, a superb close Purple Sand which only just evaded a Kestrel, a Kingfisher darting low over the tide, a Razorbill, loads of Gannets, an Eider, and a few Red-breasted Merganser. 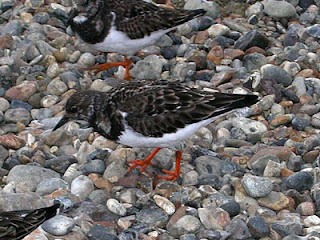 Selsey council have employed a gang of wintering Turnstones to keep the car-park clean.

Perhaps the best birding first for me though was the luxury of being able to doze off in the car whilst being chauffeured around by Mr Gray. 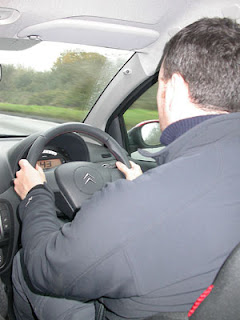 I was particularly impressed by your use of flash photography whilst dave was driving. It was only a short while after you realised flash bastards coming up on him from behind are not exactly his cup of tea!

I should've waited until we'd just passed a speed camera.