After a bite to eat and a shower, we all met up again for an evening visit to The Criterion. This was ostensibly to witness the visible migration of Shetlander Rob Fray (on his way to Goa via Leicester). The other reason was to have some beer. We were successful on both counts! 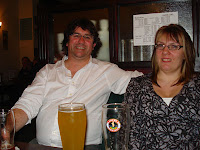 John finds that attempts to hide his rotund frame behind a pint are futile. 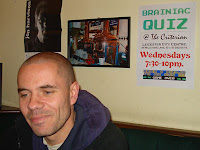 Rob ponders as to whether he should abandon the Goa trip in favour of entering the Brainiac Quiz. Exactly the behaviour expected of a man whose name is an anagram of Berry O'Fart. 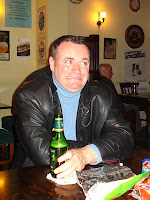 The camera catches the moment when Dave finds that after a day driving, and too many bags of salty crisps, he is unfortunately touching cloth. 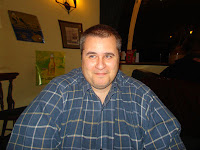 Reports that yours truly has increased in volume from fat to Daniel Lambert are largely unfounded.