Welcome to my blog, where over the coming weeks/months/years I'll be posting news and views about all manner of stuff in my life. The bulk of these posting will be notes and details of my moth trapping results, plus occasional postings about my birding (or lack of these days), my reviews and incisive biased comment on music, films, books, sport, current affairs and beer, and general thoughts and ramblings about important topics like the meaning of life and the price of Jelly Beans. All lavishly illustrated with photos, cuttings and links, probably. I'll also be interspersing current musings with 'on this day' snippets from memory lane.

Every story has a beginning though, and here's mine ....

I am nearly 40, b1968 in Leicester. I have lived in Leicestershire all of my life, in Whetstone since 1994 but grew up in the Humberstone area. I am happily married to Nichola (we met in late 1989 and eventually decided to get married in 1999), and we have three children - Isabelle (b1995), Joshua (b2001) & Alexander (b2002). They all share a common dis-interest in my interests. Okay, not quite true - the boys are always keen to see what moths I've caught, Isabelle is a budding musician and has seen some good birds (though not necessarily by choice) and Nichola really just dislikes the amount of time I spend pursuing my interests or researching / documenting / writing about them on this PC ................

In essence, aside from family (and as permitted by work commitments - I certainly won't be talking shop on this blog), the main interests in my life so far have been:

Music - I attended many gigs in my formative years and this escalated to being a member of Leicester based all-electronic bands The Red Branch and iNDUSTRiE (actually the same band with and without singers). We played numerous gigs between 1985 - 1994, but were loosing interest and faded into oblivion by c1996. The music developed from synth-pop (heavily influenced by Depeche Mode, Kraftwerk, ABC and Human League) to a harder edged industrial-techno sound (once we'd heard the likes of Nitzer Ebb, Skinny Puppy, Front 242 and Front Line Assembly). By the time we were disillusioned with lack of success and packing up, the equipment that had always been prohibitively expensive was starting to become cheaper and easier to use with full blown workstations and direct-to-disc recording. The kids today can knock out a dance track with very little effort and nothing more than a PC - not quite as rewarding as spending a couple of months programming analogue synths, drum machines and sequencers and recording on 4-track, but a damn site more prolific and lucrative!

Birding - since a very young age I've been fascinated by natural history and have always enjoyed watching Attenborough et al, but it wasn't until I was 21 that I actually started making the effort to go out into the field. I'd seen Buzzards in North Devon - although I'd actually seen some large birds and wanted to check out what they were, so I bought a field guide (two in fact - on offer in WH Smiths). Flicking through I realised just how many British birds there were that I'd never heard of, let alone seen, and felt compelled to go out and see some of them. I bought some cheap bins and started going out to local reserves to identify them for myself. 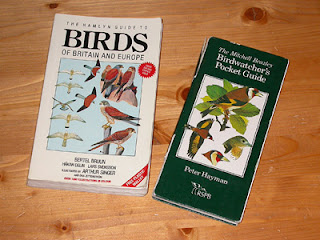 The thought of going further afield than Rutland Water never really entered my head for a couple of years, until a fervent high-listing twitcher started working at the same company as me. My first out of county birding trip, to Norfolk in May 1993, was a major eye opener. Just a week later we were back in Norfolk twitching Oriental Pratincole. By the end of 1993 I'd also ticked Red-flanked Bluetail and I was hooked. Between late 1993 - end 2001 I was a regular birder and I've seen some major rarities. I was also suffering with the debilitating pageritis. My obsession dwindled sharply after Christmas 2001 following my Dad's untimely death in a car crash - not surprisingly ticking rare birds no longer seemed important. I was still birding occasionally with my last tick being American Robin in January 2004, but since then I've neglected the scope and bins in favour of moth trapping ............. but I've just dug them out to get back into local birding.

Moths - I first got interested in moths after borrowing a heath trap in 1999. I built my own Skinner trap and started regular trapping in the garden in 2000 which continues to the present. Since that Skinner trap, I've also acquired enough kit for some serious out-of-garden trapping although I rarely go out of VC55 (Leicestershire and Rutland). The big appeal for me was a) the much greater ID challenge and sheer numbers of species, b) you can build up an ever growing list of species in your own garden, and c) the records generated are of much more scientific importance than any bird I've twitched. From day-one I've focussed on the micros as well as macros, though I have never bothered to try setting anything and have not yet mastered (moth) genitalia examination. I do photograph a lot of moths though. Nichola and the kids have got used to finding pots with moths in the fridge waiting to be photographed.

Other stuff - in no particular order:
I have read all but the latest of the Terry Pratchett Discworld books.
I used to be an avid reader of the 2000AD comics - Slaine, Rogue Trooper, Nemesis and ABC Warriors being my favourite story-lines.
I became addicted to on-line Poker a couple of years ago - I defeated this addiction by buying up some first-person shoot-em-up Playstation games on e-bay.
I then became addicted to first-person shoot-em-up Playstation games ..............
I have pretty much everything that Depeche Mode, Orbital and Kraftwerk have ever released in my hugely varied music collection.
I have no time for religion.
When I play squash I have only one aim - which is not to die from a coronary attack.
I have drifted in and out of supporting Leicester City FC - but I haven't drifted into following the Premiership team of the moment since I was at junior school (when I was always Steve Coppell playing for Man U. in the playground).
I am not a Royalist - at least the French got that one right.
I am allergic to DIY.
I have watched David Lynch's Eraserhead many times and still don't get it.
I have some golf clubs, and occasionally destroy municipal fairways as I hack my way around.

Hi Skev, I'm sure your wedding was timed to stop Dave and i getting Red-flanked Bluetail back on you! It took me till 2006 fo finally get that back. I'm sure you could find some amusing way to stop us seeing Oriental Pratincole or the Tattler if you try.

Never mind your Bluetail, my wedding also cost us all Chimney Swift. Can't remember whose wedding co-incided with a Collared Flycatcher?