That blog post title up there is just click bait - anyone landing here hoping to purchase an x-rated swearing motion-activated parrot will be disappointed.

An empty moth-trap first thing this morning was no surprise, but at least it was pretty much dry - just a veneer of drizzle and nothing to ruin the newly cut eggboxes. After that the weather stayed dull and overcast with a bit of wind thrown in. I had intended to get out later in the afternoon once I cleared the decks of a few work-related bits, but that got initially scuppered by some IT issue requiring an expert(!) to take remote control of my laptop, and an hour and half of my time in the process whist not resolving the issue, and then as I was getting sorted to head out it started drizzling and I lost enthusiasm. But, as I looked out of the back door I noticed a fly settled on the rain cover of our garden parasol. I grabbed a pot and managed to get it under control easily - the fly obviously not up to speed and temp to evade the effort. I recognised what family it was, and decided to get it pinned and see if I could key it out.

Whilst I don't enjoy killing insects I do of course recognise and accept that records generated have value and the impact on any species is absolutely minimal. It's not like I'm creating a long series of something that is immediately identifiable. I only really started to pin stuff last year, and am in no way expert or proficient at it. I was therefore quite pleased to be able to pot, euthanise and pin it with minimal effort - with the bulk of the time being leaving in the fly in a pot with the ethyl acetate fumes for long enough to be sure. Anyway, here it is in all it's hairy glory .... 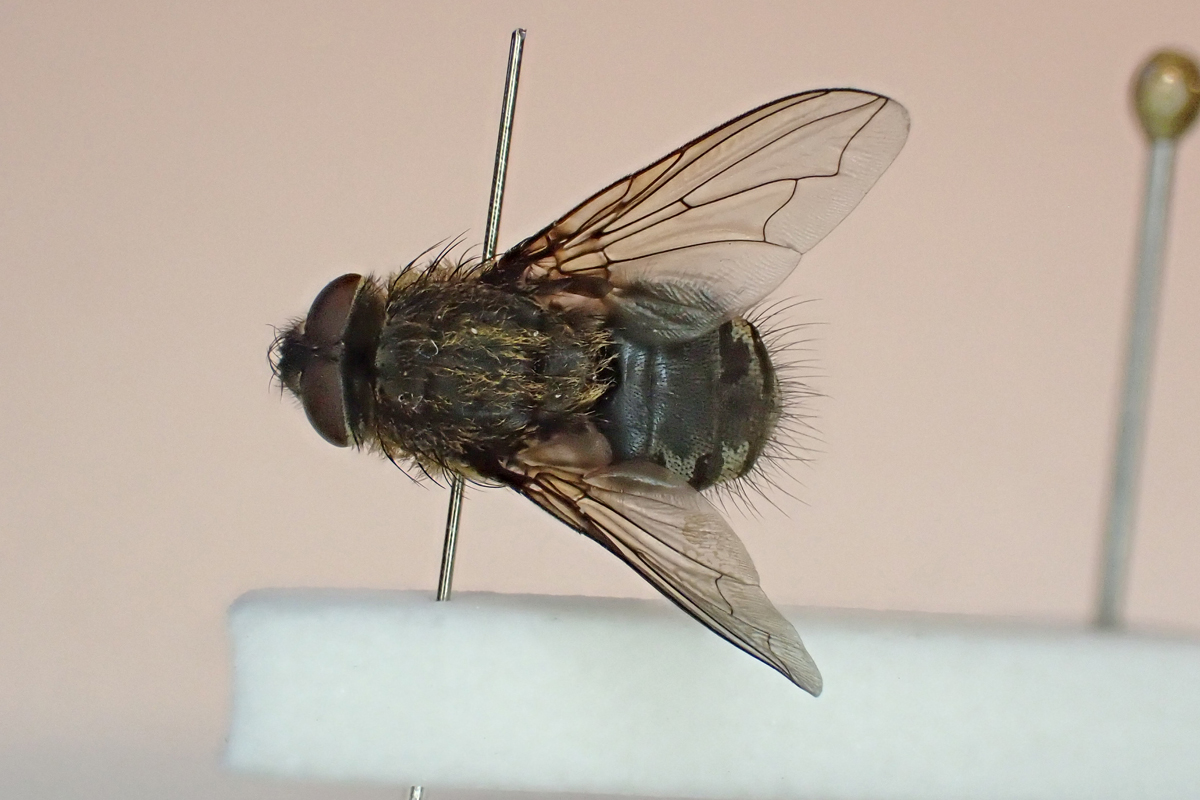 Expertly pinned - no. Pinned well enough to be keyed - absolutely.
So, you'll notice that the thorax is liberally covered in yellow hairs - which I recognised as being a key character of the Pollenia spp. - cluster flies within the Calliphoridae. A quick search on-line yielded a test key produced by Steven Falk. I opted to use this as it seemed to be a nicely laid out document with helpful illustrations pointing out what bits of a fly to look at. So jumping straight in to the section with the key to Pollenia spp. I started working it through. I've paraphrased the couplets - there was more that could be checked but I think I've picked out the key suite of features.
The first couplet asks if the abdominal tergites are black-ish grey without any conspicuous dusting? As you can see above, the abdomen has a conspicuous shifting pattern of dusting which eliminates Pollenia amentaria.

Onto couplet 2: this asks if the node at the junction of the humeral cross-vein and subcosta on the underside has a tuft of yellowish hairs? A quick squint at the diagrams and I had the fly under the microscope .... 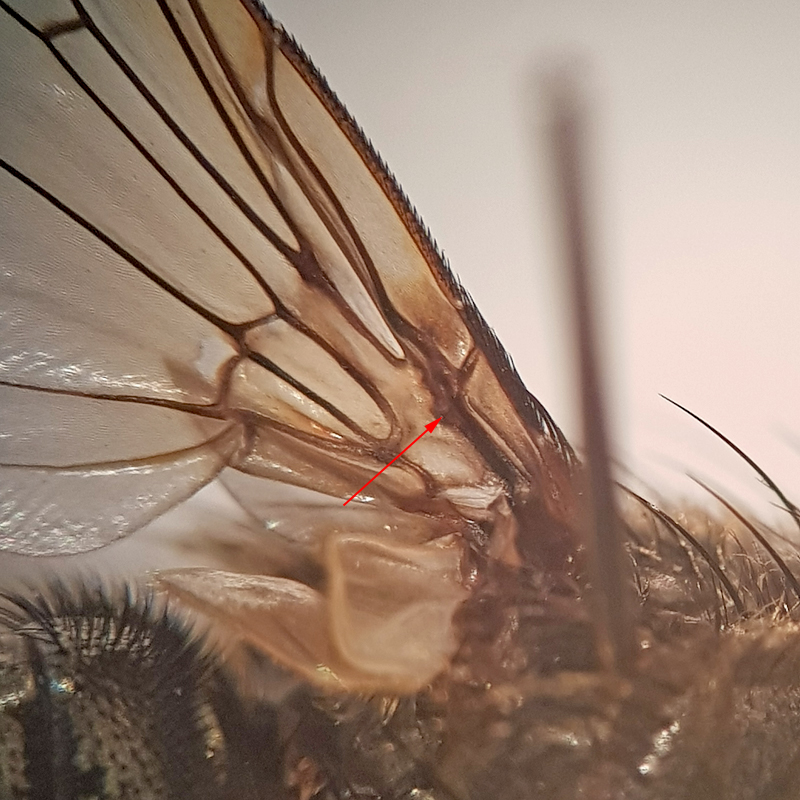 So, in the area where the arrow is pointing (and you may have to take my word for it as hard to clearly capture) but there is no tuft of yellowish hairs here which eliminates Pollenia pediculata.
Onto couplet 3: mesonotum in front of suture with a median dark stripe? No, which eliminates Pollenia vagabunda.
Couplet 4: is the outer posthumeral bristle missing, and does the facial keel barely extend beyond the antennal sockets? 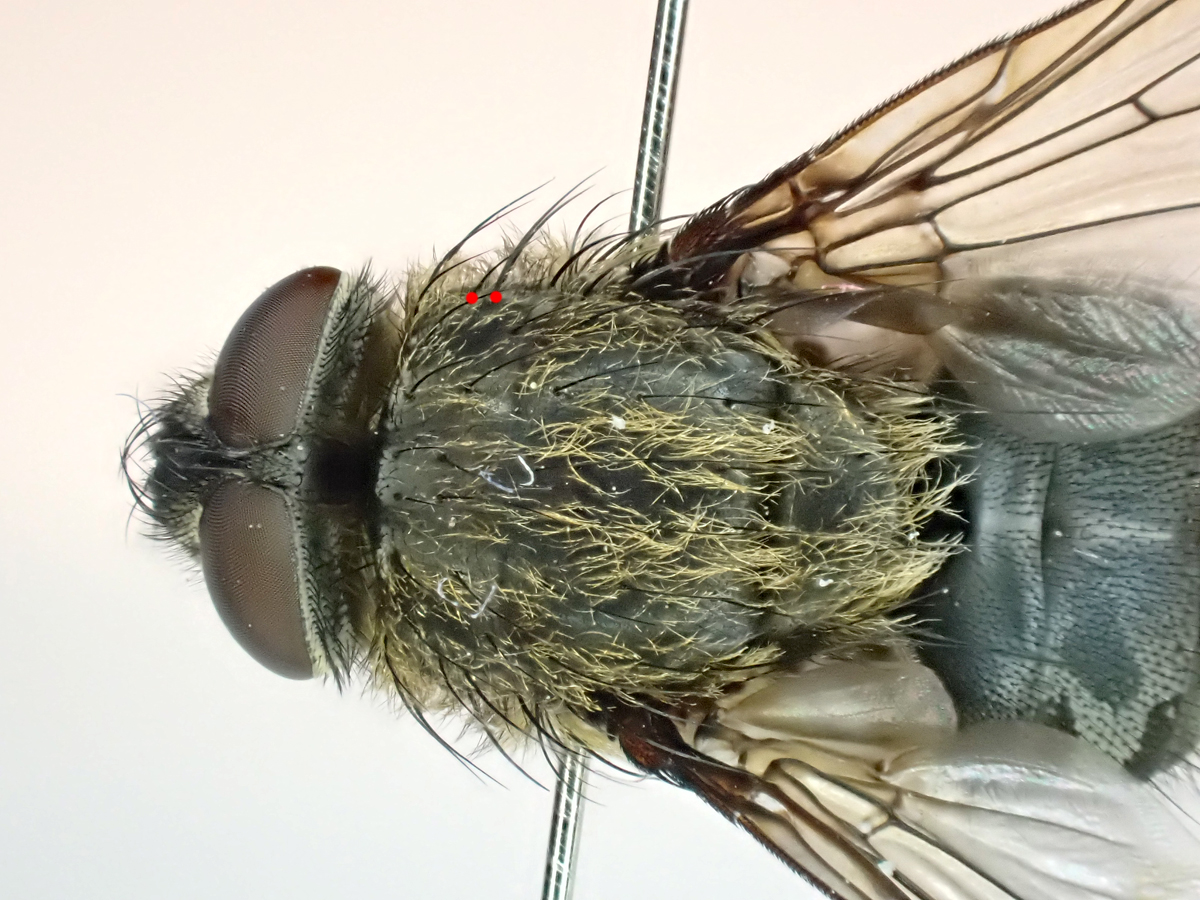 This is where things gets awkward for a fly novice: learning thoracic bristle placement/names is tricky enough when you can see them clearly without an entanglement of yellow hairs. But I think the two red dots are posthumeral bristles, in which case the outer one appears to be there just behind .... 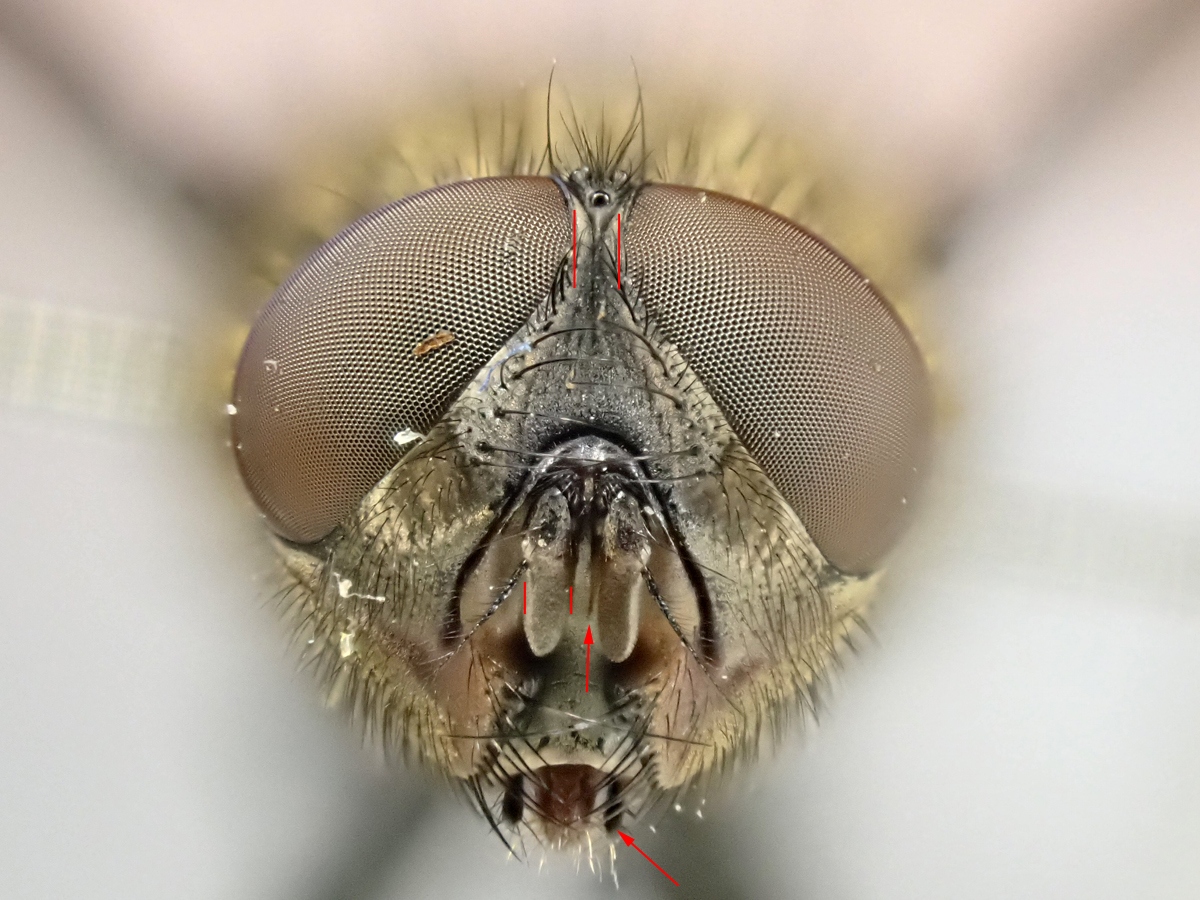 and [post-edit thanks to Seth], the facial keel (arrow in the middle of the face) extends well beyond the antennal sockets .... so if I got these right it eliminates Pollenia griseotomentosa. [This facial image has other features which get mentioned further on.]
Couplet 5 asks: are the posterior thoracic spiracles brown or yellowish .... 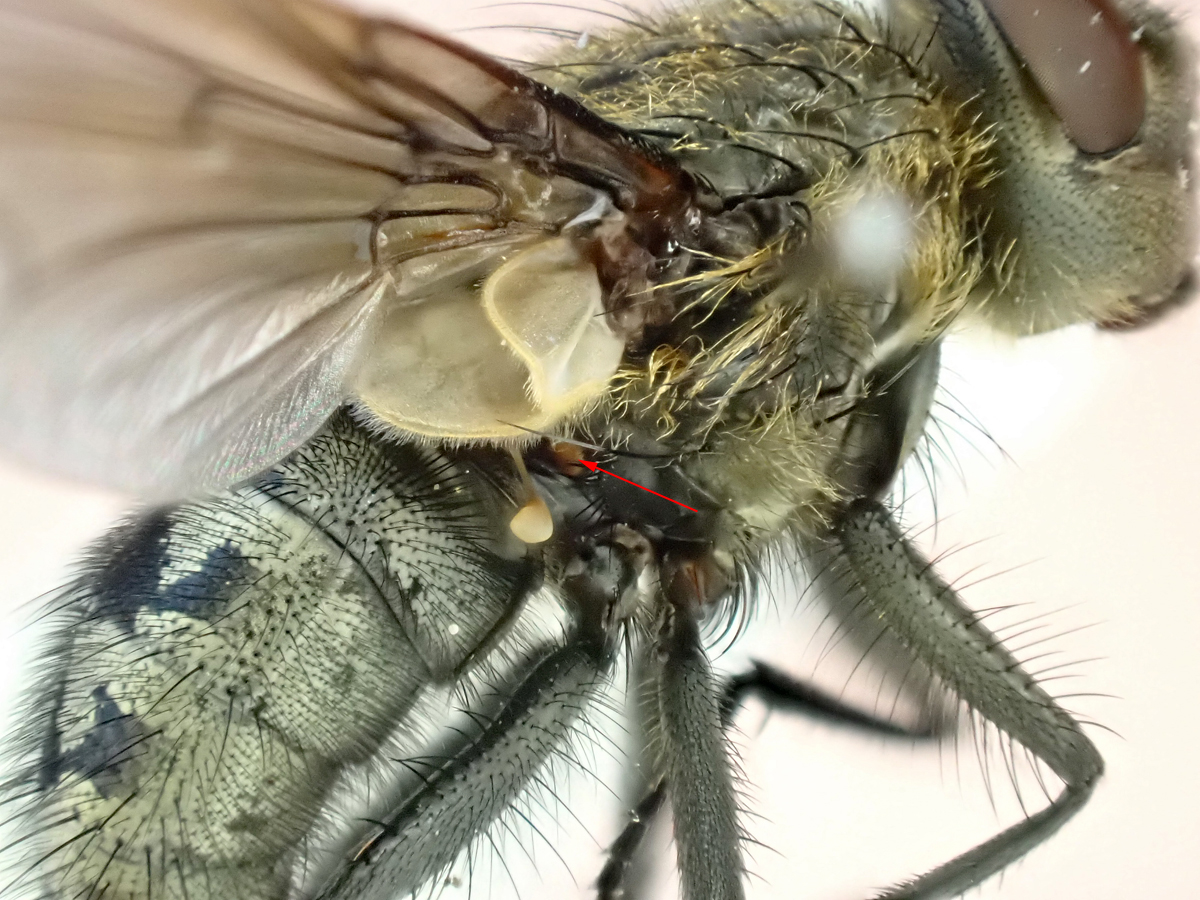 Certainly look yellowish to me, which eliminates Pollenia labialis.
Couplet 6: palpi reddish-orange for apical third or more, or are they dark. Referring back up the facial image, the palps (bottom arrow) are dark, which eliminates Pollenia viatica.
So we're down to two species: both common. Couplet 7 has a number of features that could be checked. One is the spacing between the eyes in males - again referring up to the facial image, though it's a bit subjective, but the space between the eyes is about the same as the width of the third antennal segment. At least it's not half the width. Leg hairs and bristles come into play as well: most pertinently, do the hind femora have yellow posteroventral hairs? I mucked about looking all ways up but can only see dark hairs on the hind femora .... which would be right for the eye spacing. 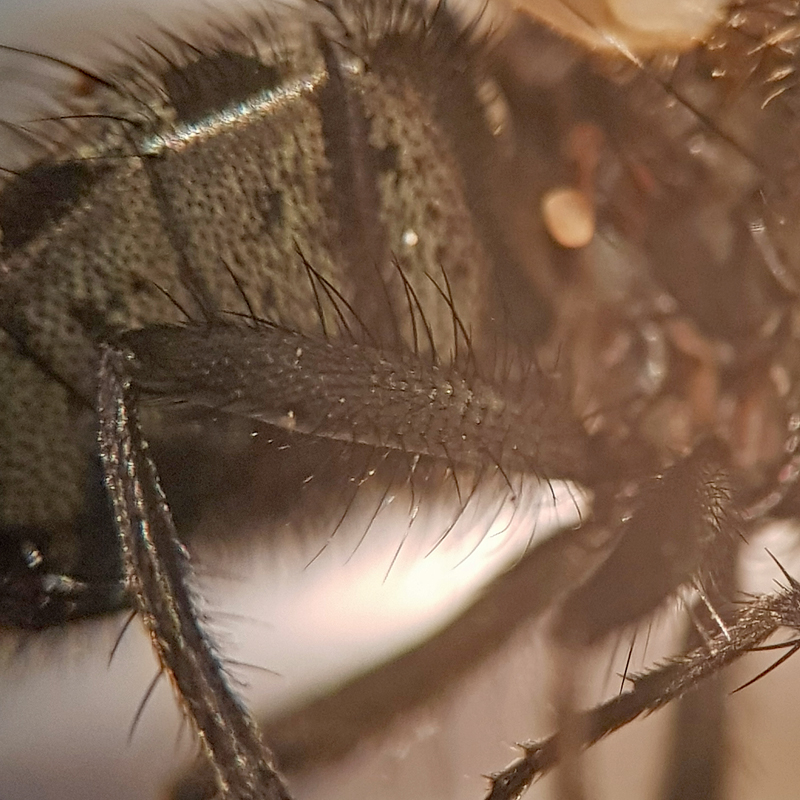 The couplet also asks if the mid-tibia has one or more anterodorsal bristles .... it appears to have three. 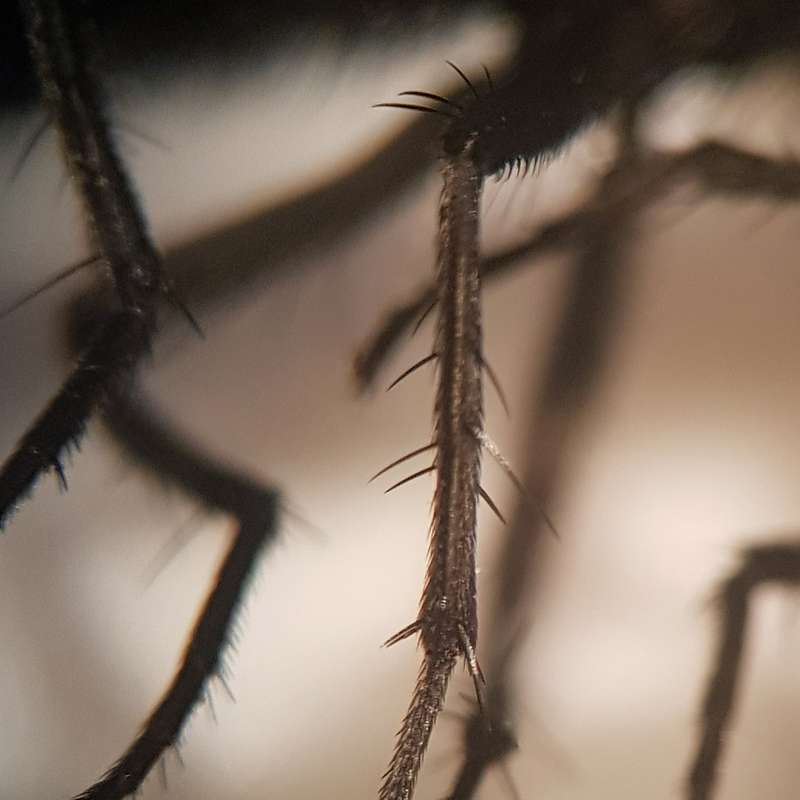 So with eye-spacing being the same as the width of the third antennal segment, the lack of yellow hind femoral hairs and the number of mid-tibial bristles, Pollenia angustigena is eliminated leaving one option .... Pollenia rudis, apparently also referred to as the Awkward Clusterfly. Perhaps because keying the damned thing is awkward.
Pollenia rudis is almost certainly the commonest, at least here in VC55, but good to properly look at it. Now to sort out the labels, which are going to have to be temporary until I get back into the office and can get to a decent laser printer - my ink-jet at home is not up to proper small font permanent-print labels!
There's not much blogging going on just lately amongst my usual reads. In fact nothing beyond how to securely parcel up fleas for posting. Here's something else that is a bit awkward, absolutely compelling and definitely different ....
Posted by Skev at 20:18

So regards your Pollenia. The facial keel runs vertically down the centre of the face between the antennae, what you've arrowed in the ptilinal suture, which is the fold left over from when the fly inflates its head like a balloon to burst out of the pupal case. I've seen it happen, freaked me out until I understood what was occurring! And yeah, the thoracic bristles can be a frickin mare, even when you've been doing it for a while. If only flies stuck to one general body plan, but they really don't.

Ah, okay thanks. Looks like it is still just about visible and still runs well beyond antennal sockets. I will certainly look at more proper flies this year and have a go at sorting out the terminology/physiology.

Proper flies? Haha, yeah none of those leggy bastard things just the proper ones :D

That is almost exactly what I meant; flies that are big and meaty enough to pin and scrutinise! I need to try and pin out the genitalia too - but that probably means pinning out on plastazote and letting dry before staging/keying.

It's definitely required for some families, sarcophagids particularly so (which are definitely chunky enough that you may be tempted by them). But for others, scathophagids for instance (the dungflies, also chunky enough to catch your attention) they're next to useless and not used in the keys. Sphaerophoria (hoverflies with long bodies) are only do-able by checking the male genitalia, the females are essentially no use at all unless you catch them in cop. I pin such flies to a piece of plastazote and tease out the nads with a hooked pin, then hold them in place with a micropin or two. And yeah, as you say, leave for a few days then they're good to stage. I could do a quick blogpost, seeing as your usual reading list has gone quiet...nah feckit, one for another day.

I'll get that label redone .... perhaps I should forget trying to include such detail on the label!