.... and a certainly do not mean the Urban Dictionary variety.

Today for the first time since last Wednesday I manage to get out for a bit. My sensitivity to cold due to the chemo was tested enough on Wednesday, but from Thursday onwards we had absolutely baltic conditions - no more snow and generally dry but with a biting wind. In fact on Saturday the outside temp was only -2C during the early afternoon. The other thing I found on Wednesday is that my boots were still pretty wet after several outings in rain, snow and ice. They were starting go a bit mouldy. The problem is just down to being left wet in a box in the car, which itself is sitting on the driveway unused for far more than would usually be the case. I remembered this on Friday and got them inside to dry out properly, and then gave them a liberal spraying with some waterproofing spray. They were bone dry on the inside and I'm sure they will last another couple of years of abuse. I usually buy a new pair every four years ish - and against best advice I usually opt for a cheapish pair of Karrimor or similar from Sports Direct, with leather uppers and the usual mix of man-made layers that give them waterproofing but breathable characteristics. All fine if you look after them. Which I don't.

Anyway I've digressed. This afternoon I had to nip to the GP, and from there I went over to see my Mum. She lives almost diametrically opposite to us on the other side of the City. To get there, avoiding the city itself, there is an outer ring road. Essentially it doesn't matter which way I go, it takes about the same time and distance. So on the way home I went anti-clockwise which meant that I would literally pass Watermead CP South - a handy place to stop for a walk with bins and camera, albeit outside the 5MR etc. By then the temperature was a balmy 12C, a massive swing from Saturday.

For someone that is not particularly a fan of gulls, I seem to spend enough time looking at them when I'm anywhere with them about. Today I was hoping to clock an Iceland Gull that has been dropping in there occasionally - no luck on that front. But bugger me, I did re-find that blasted hybrid. 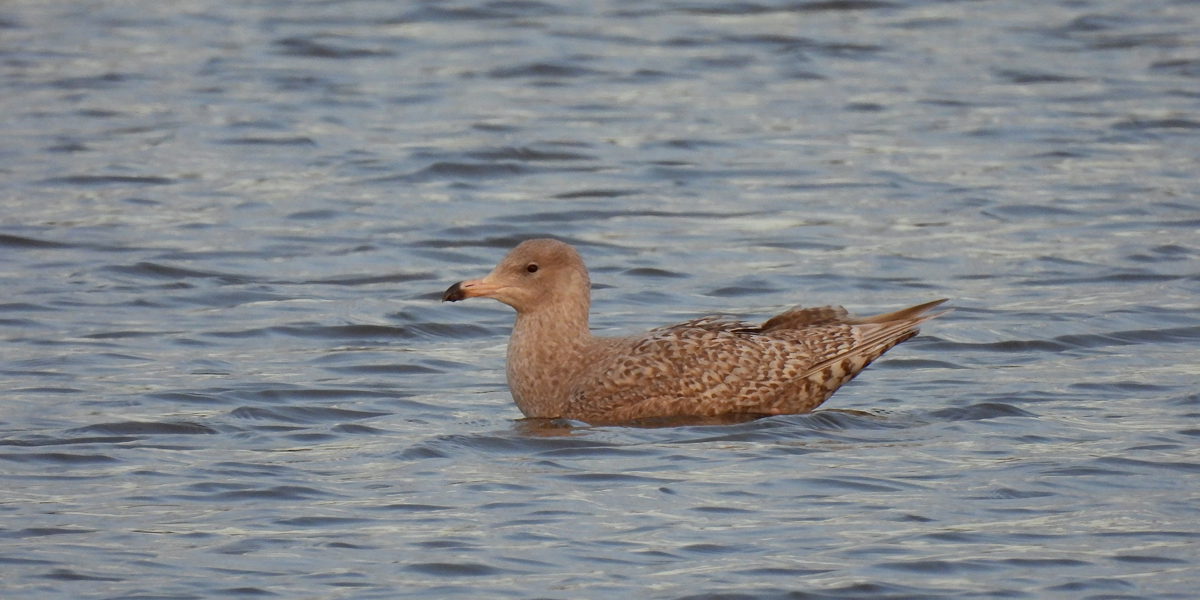 There were plenty of gulls about, the vast majority being Black-headed. I was surprised to see that a small section of the lake was still a small iceberg. This icy platform actually moved away from where I first saw it and drifted further into the middle once gulls were landing and moving about on it.

There is no one spot that is worth watching out for a gull roost at this site, they end up being spread over two lakes, the main one has an island in the middle of it with gulls all around it (and on it), and the smaller lake is not really watchable that late in the afternoon with the sun in your face - although I tried. Added to that, the continual stream of people with bags of seed and bread means the smaller gulls are in a constant state of greedy agitation. Still, with a bit of ice on the water I turned my attention to looking out for an colour-ringed birds and scored .... 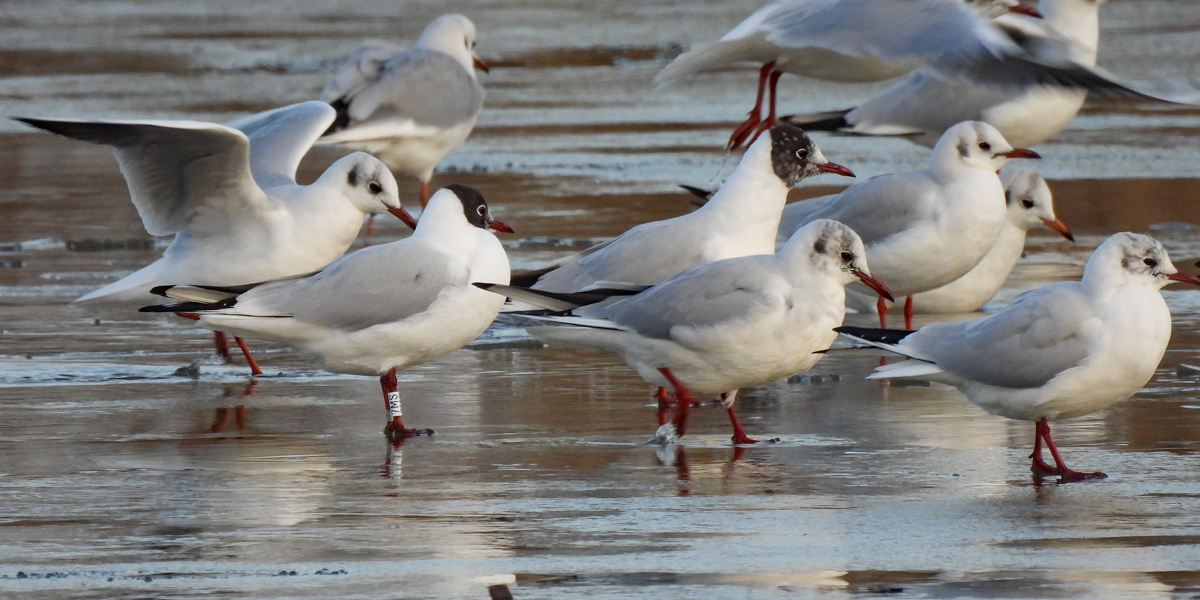 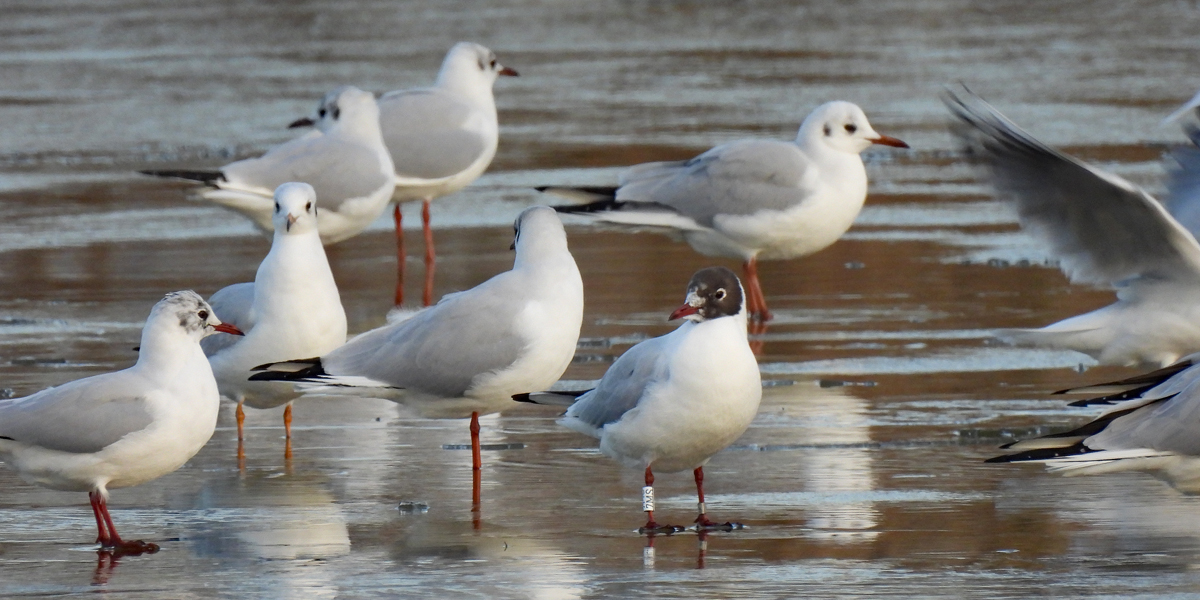 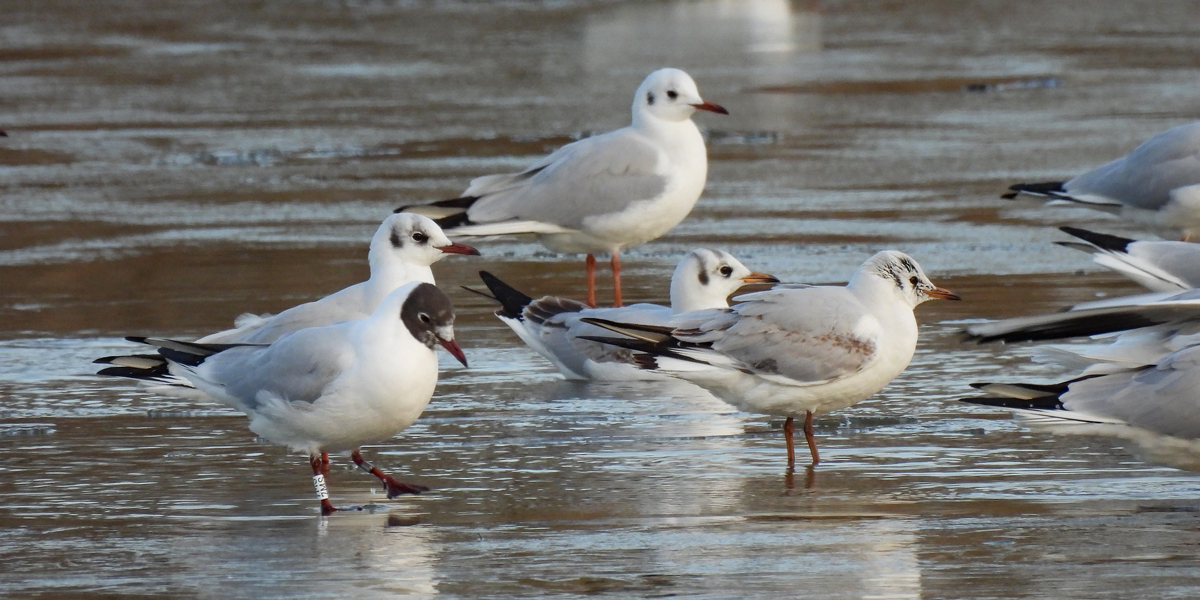 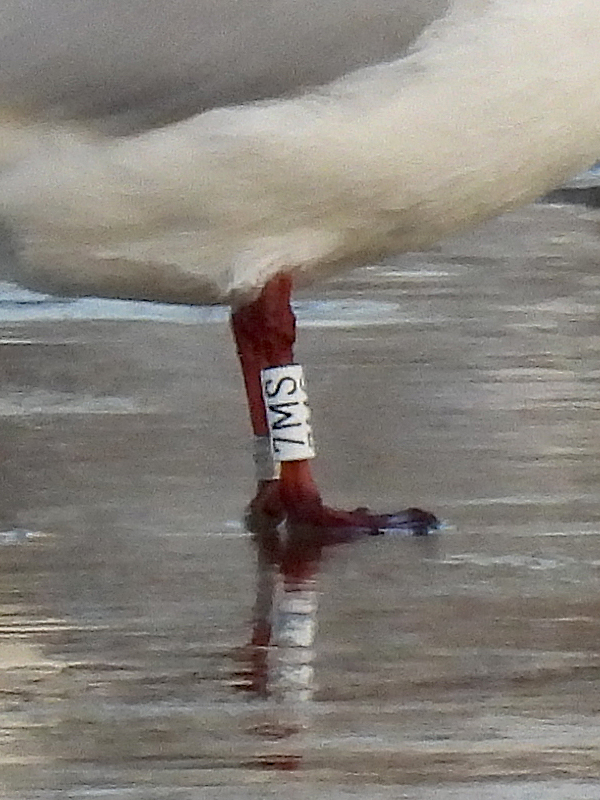 White 7MS - Danish
I've sent off the sighting details, hopefully I'll get something back with the bird's movements.
Regular visitors to this blog over the years will know of my disdain for hybrid/domesticated/naturalised wildfowl. Look at the state of this; if we could just get posh twats to stop releasing Pheasants and Red-legged Partridges, stop mis-managing grouse moors and start targeting these .... 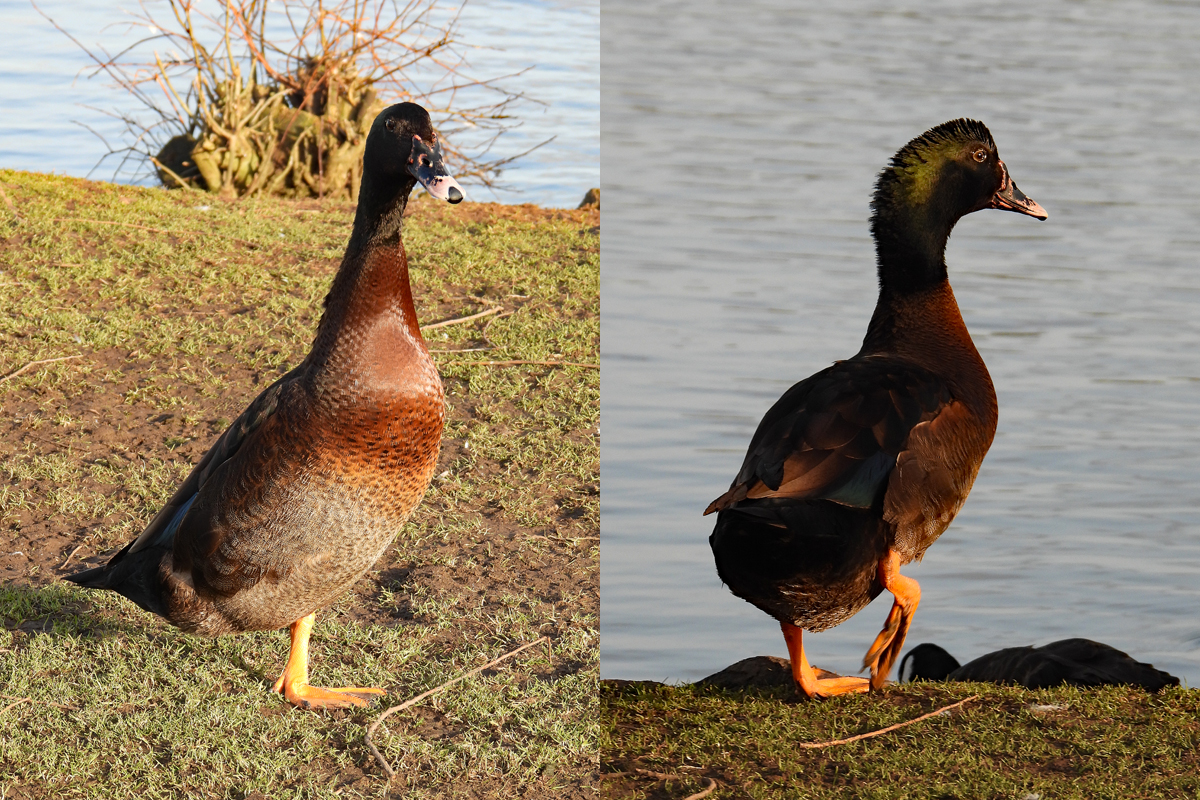 Proper wildfowl (and that is stretching it given the bread-crazed nature of a lot of them) were few and far between: a pair of Goosander, a handful of Wigeon and Gadwall on the smaller lake, no Shoveler or Pochard. I wonder how far wildfowl got pushed out with the freeze. 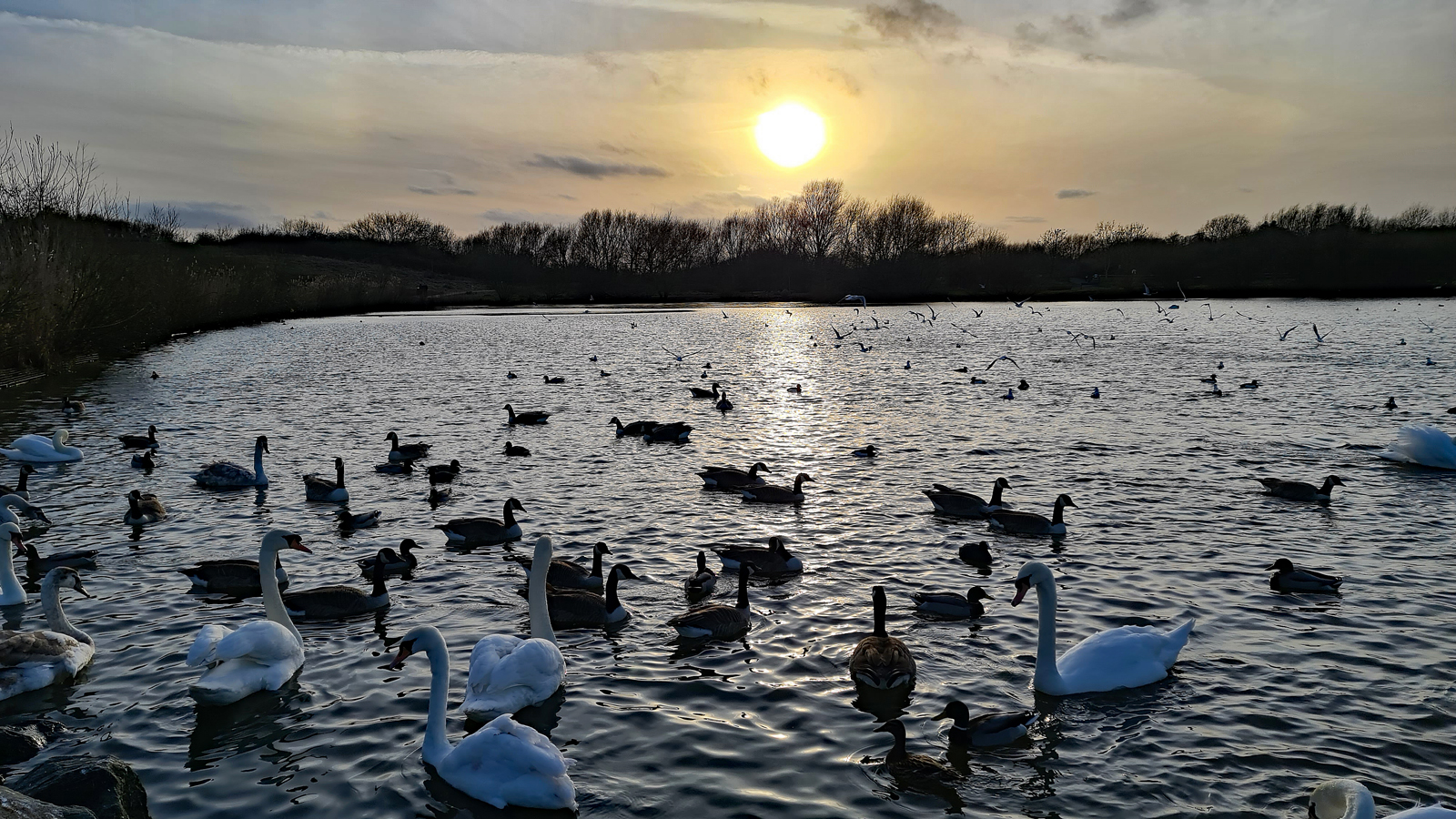 Whilst walking around, I casually looked at some Ash keys following a post on Facebook today. I was half-heartedly looking for the feeding signs of Pseudargyrotoza conwagana, but inadvertently stumbled on a micro-fungi that is not dissimilar to Holly Speckle. I brought a couple home .... 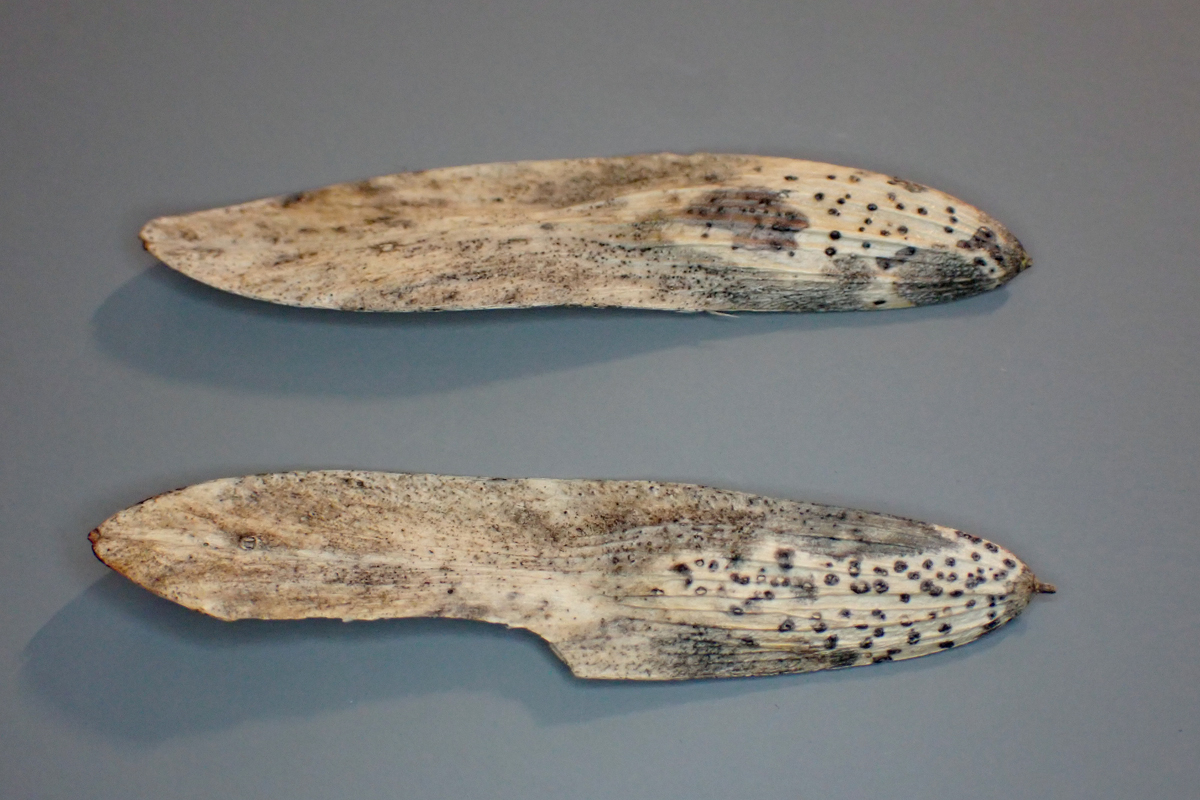 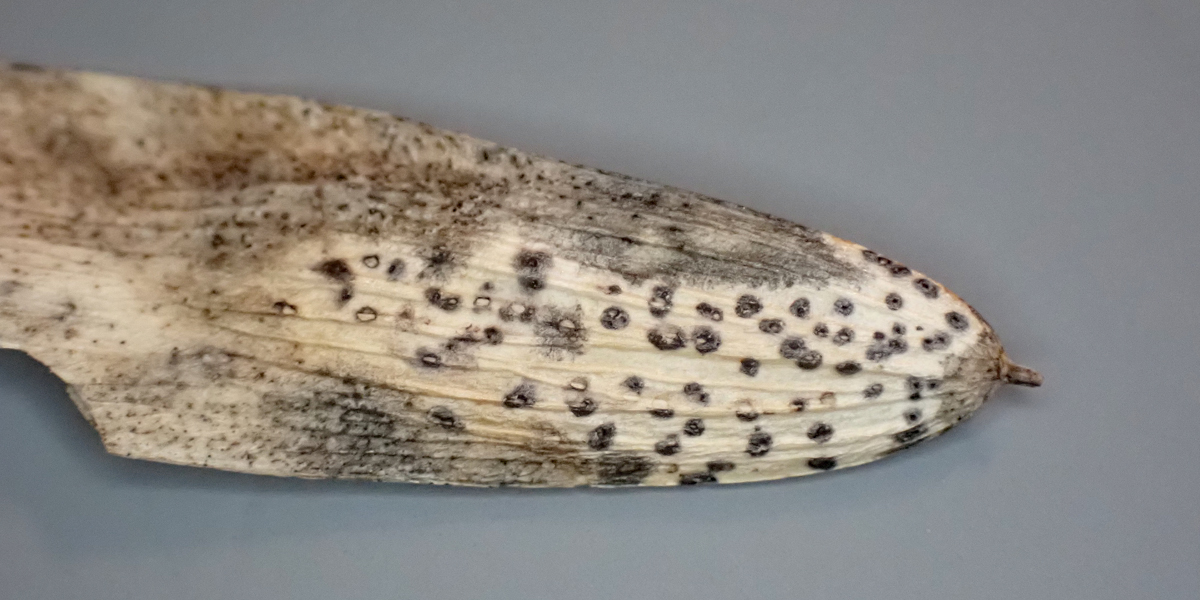 It didn't take long to search bioinfo.org and come up with a name for this - Diaporthe samaricola. A further search then showed a two-for one - the smaller black speckles on the 'wing' are Neosetophoma samarorum.
With the temps up, and overnight temps looking unseasonally mild, I had intended to get a light trap running. Only to find that neither trap I currently have at home is working for one reason or another - a job for tomorrow as the forecast for the next week and beyond promises some daft-for-Febrary temperatures.
Here's some 80s synth-pop cheese - I liked their singles, and always felt queasy when I saw his shite haircut. Of course back then I didn't give too hoots about the usage of 'Seagulls' ....
Posted by Skev at 21:21

Your next task is to find a 5MR ring on one of those gulls. I like the look of your dodgy ducks, made up of 7 species and 3 legs by the look of 'em!