Over the years, I have benefitted greatly from seeing what others have found and then gone looking for it myself. This last week has seen the tables turned, and my casual find and bit of quick detective work has lead to a flurry of records. I'm referring to those Ash key fungi that I first found at Watermead CP South on 15/02/2021 and followed up in my home square on 16/02/2021. Of these, there were two previous records for Diaporthe samaricola in VC55, albeit not supported with photos so not featuring in the Naturespot gallery. The other, Neosetophoma samarorum, was apparently unrecorded in VC55 before I noted it. Since then, records have started coming in from all around the VC. The following maps are from iRecord early this afternoon, showing all records for Leics. & Rutland (including one or two only just submitted that are not yet accepted, but will be). Top map is for Neosetophoma samarorum, bottom map is Diaporthe samaricola. The circles with red dots are my two records for each. The map for Diaporthe samaricola also shows the original two records (blue dots) - I guess the recorder was not aware of Neosetophoma samarorum. It's pretty obvious that everyone that has looked over the last week has found both easily, and that both are widespread around VC55 as expected. 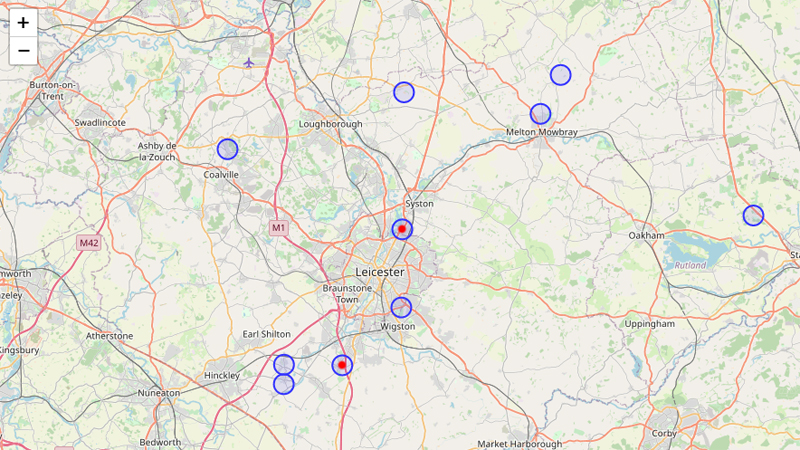 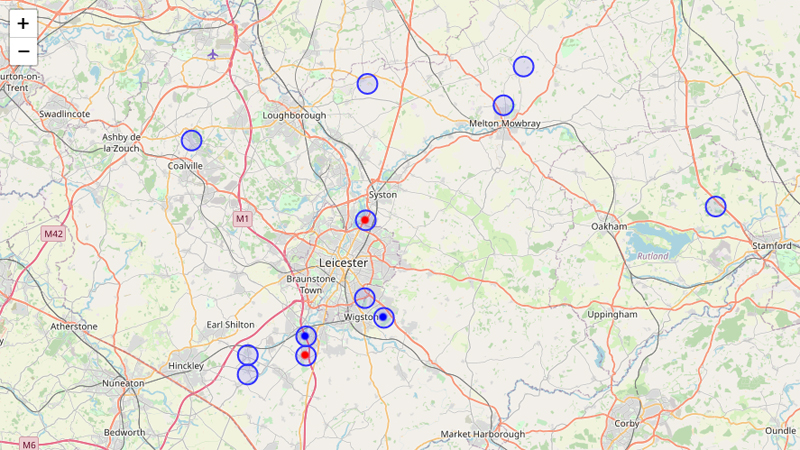 It doesn't stop there though. Although I posted pics etc on here, put the records on Naturespot and declared the two species on my PSL update, I didn't bother posting anything on Twitter or the PSL Facebook. I fully expected that most PSLers would be aware and already have seen these, and it was just me catching up. But others that had picked up the species from Naturespot did post messages and it has prompted some easy ticks for others .... for example .... 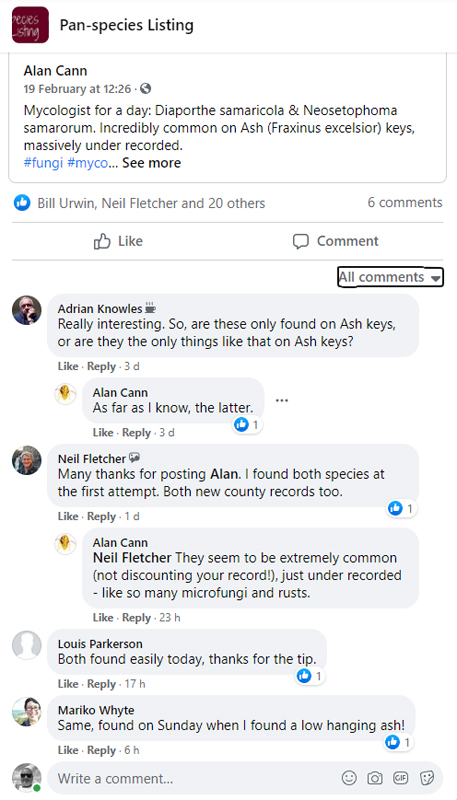 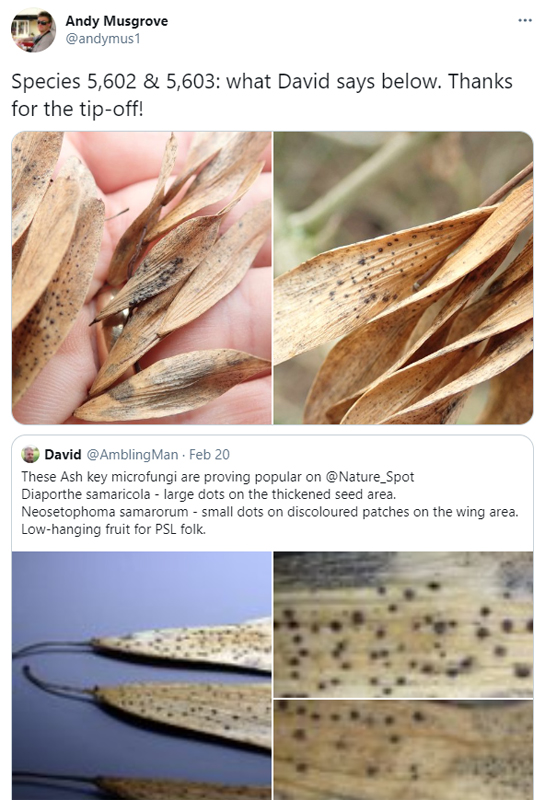 I wonder if this is the first time that fungi has spread virally?!
I've had a couple of sedentary days for one reason or another. It's been mild, but tempered massively today by more strong winds. The garden trap has been rubbish, even for mid-Feb, despite the temps. I pointed the TG-6 at the only noctuid to turn up so far, and to be honest I'm not overly happy with the result. The colour balance / white balance was way off so I've had to tweak in photoshop. It's also not quite as sharp as I expected. I'll need to get into the camera settings and see what I can set-up manually (although most setting when in 'microscope' mode are automatic) before trying indoor moth photography again. 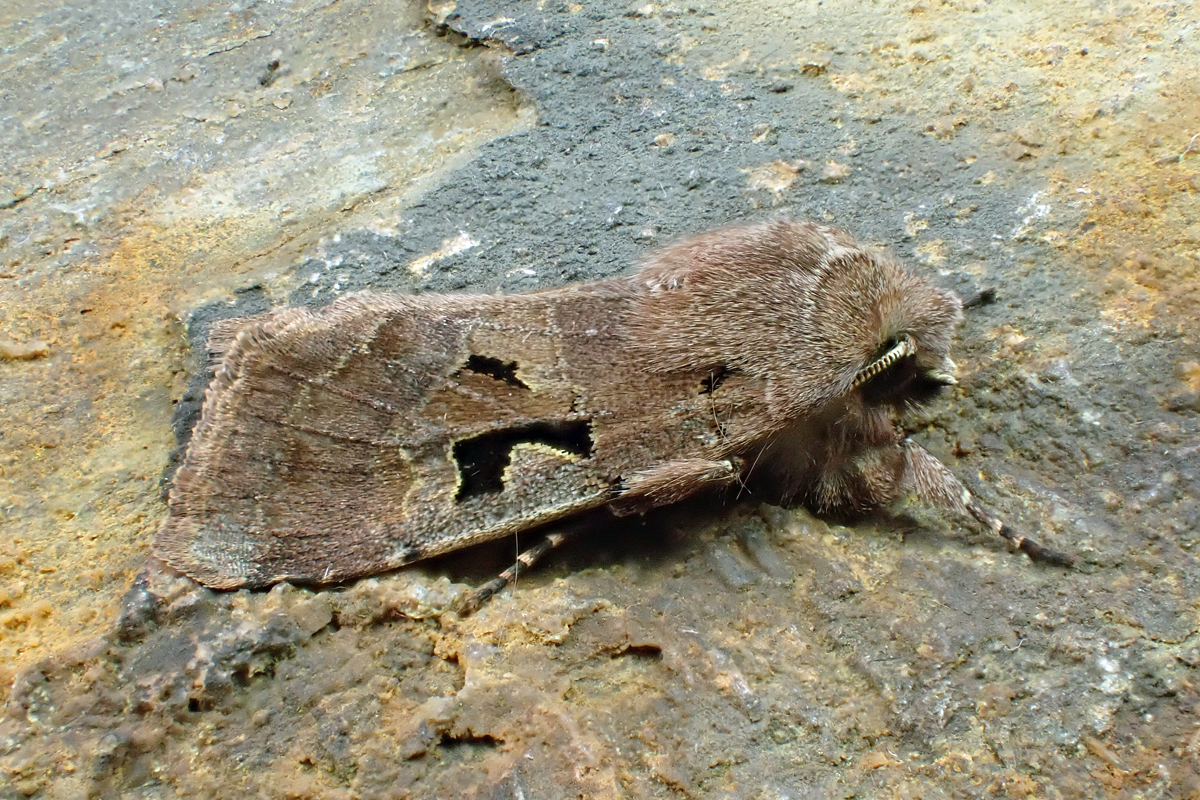 Hebrew Character
It seems okay when using it outdoors though; this Emmelina monodactyla is a hand-held stack as it sat on a uPVC window frame .... 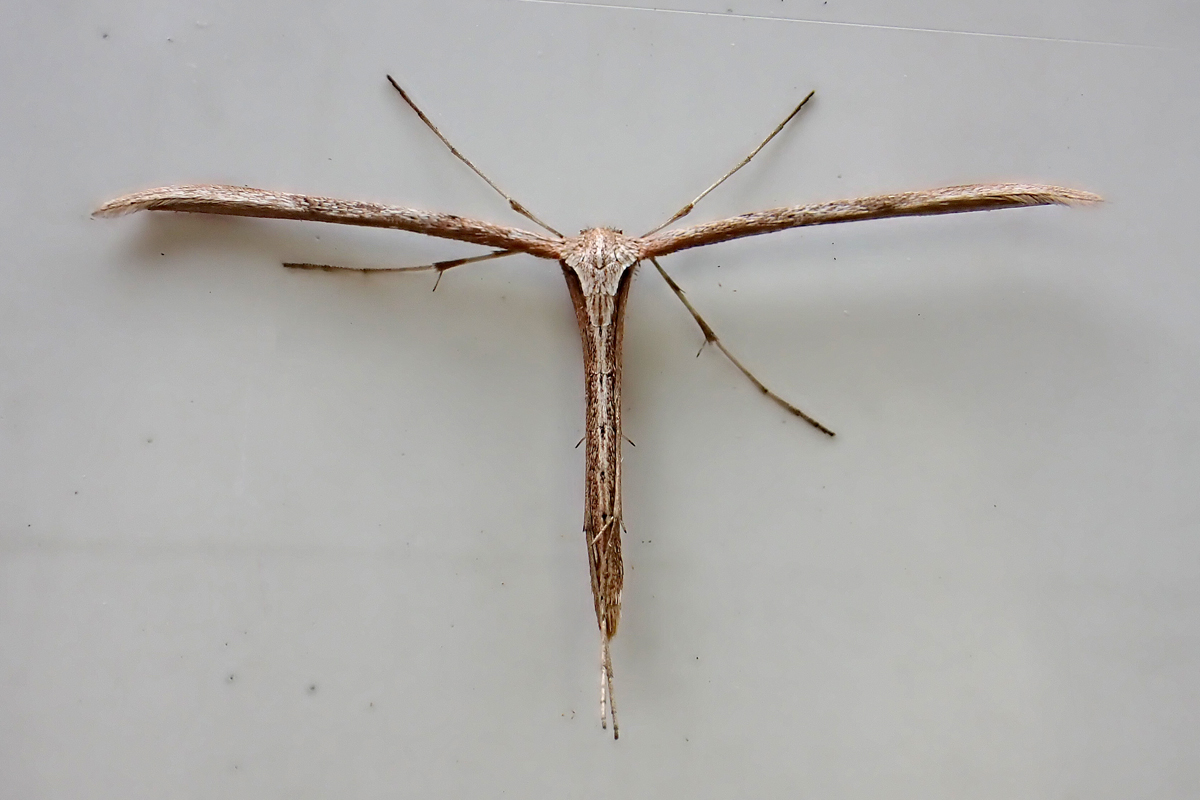 Whilst mooching about the garden, I also found a very early instar larva .... 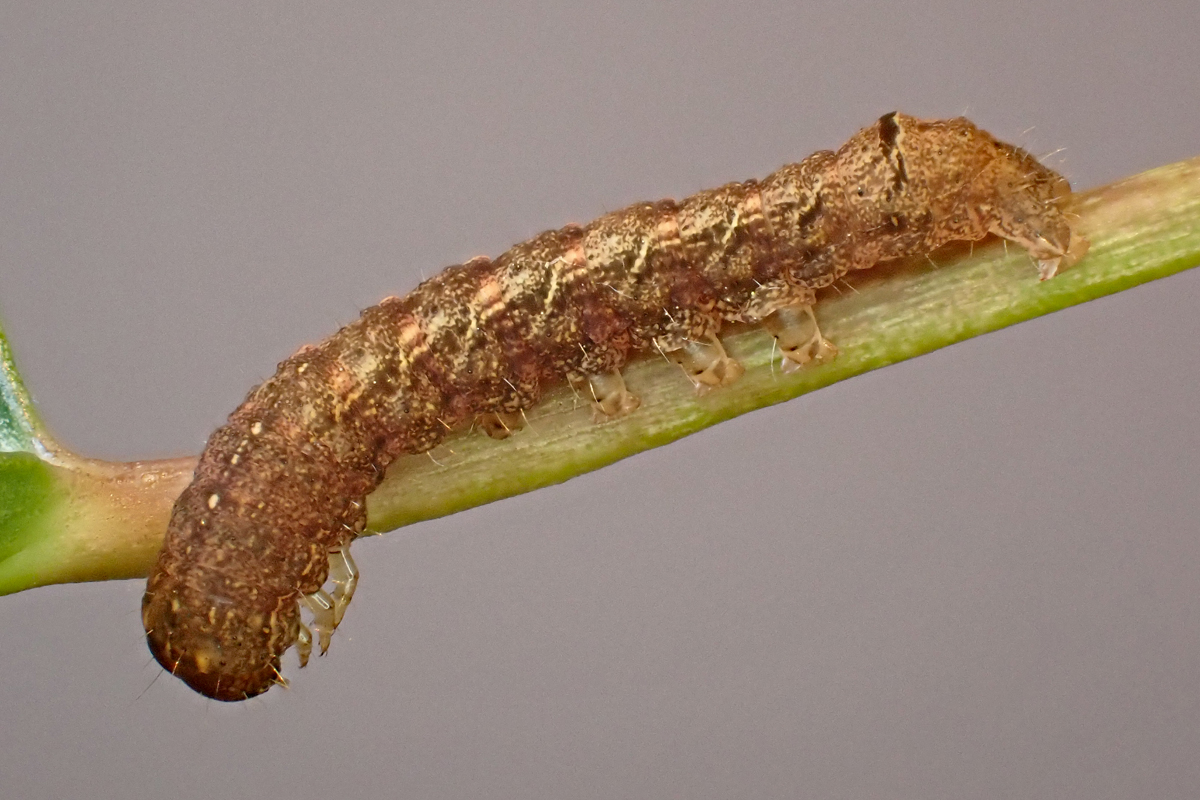 Old Lady
I also had another look at Lichens in and around the front garden, on the walls and paving .... 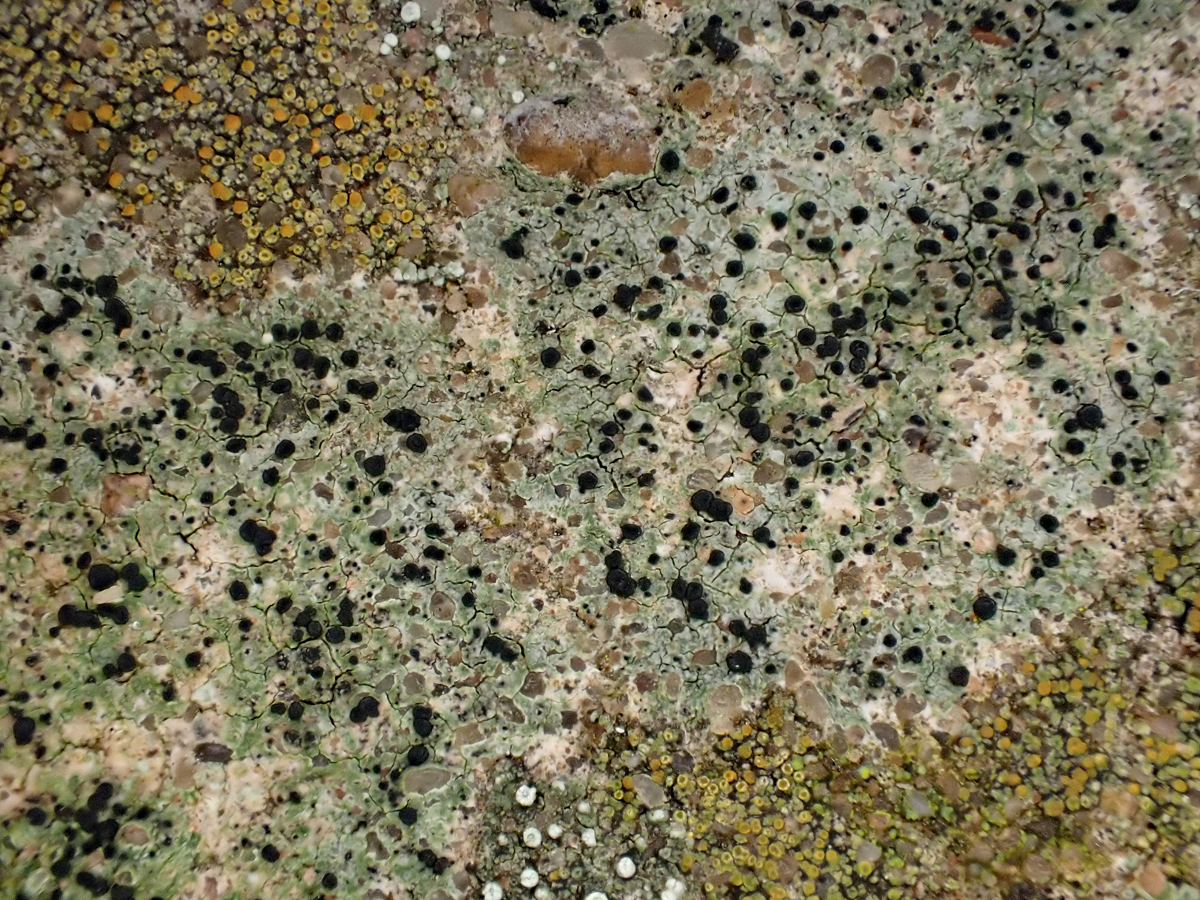 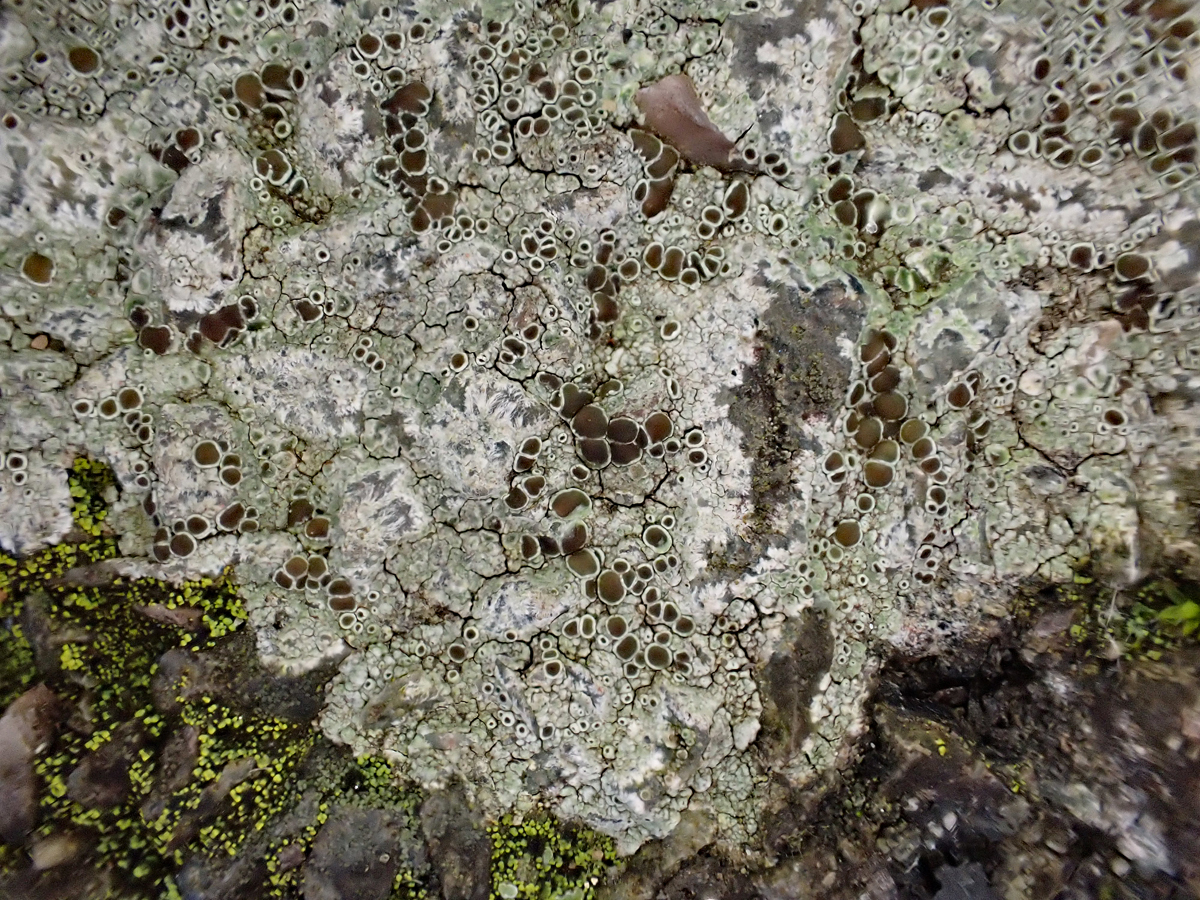 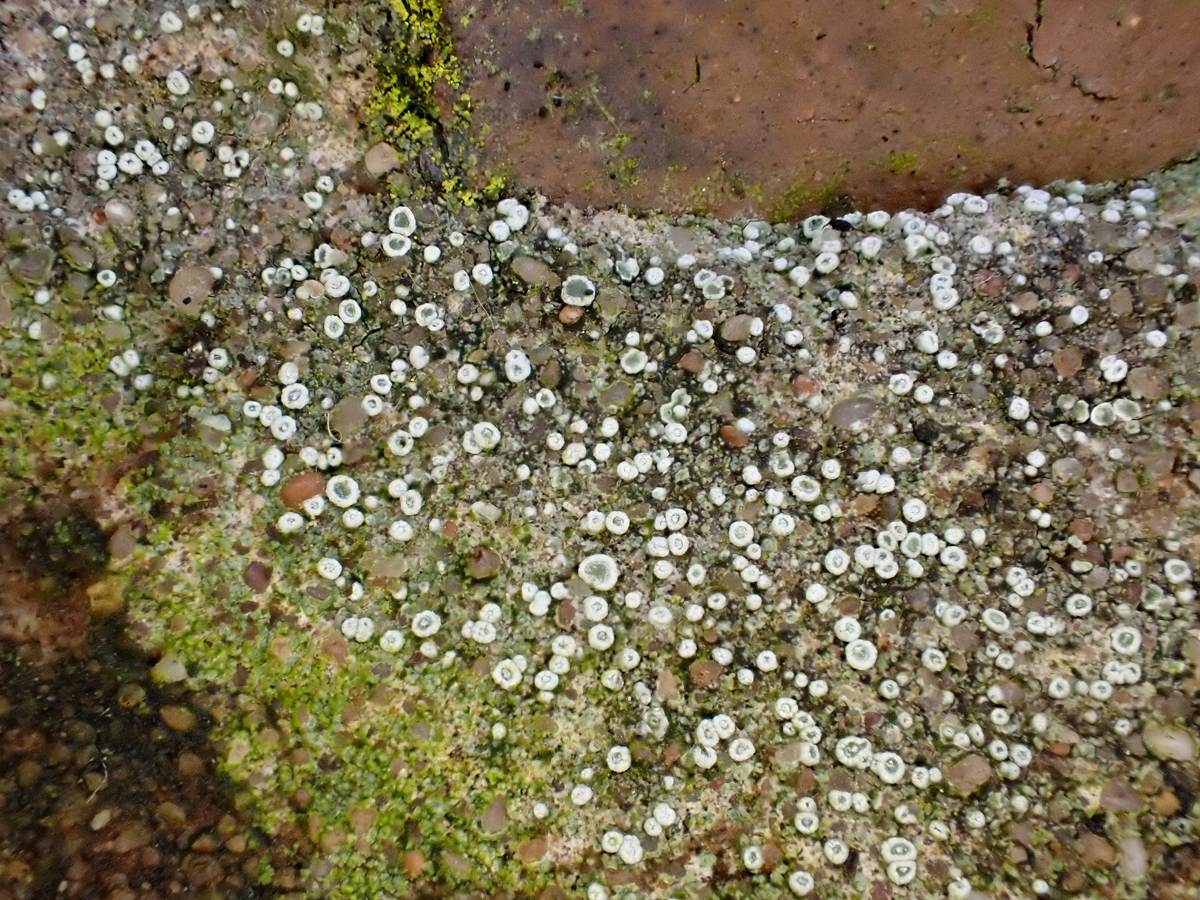 Lecanora dispersa
I've also pinned a couple of Ophion obscuratus agg. for (hopefully) future reference. Work is ongoing with this group by some proper Entomological scientists, and it seems highly likely that there are several species with different phenology; this is likely to be an as-yet unnamed species that flies in late winter, particularly turning up in light traps in February. 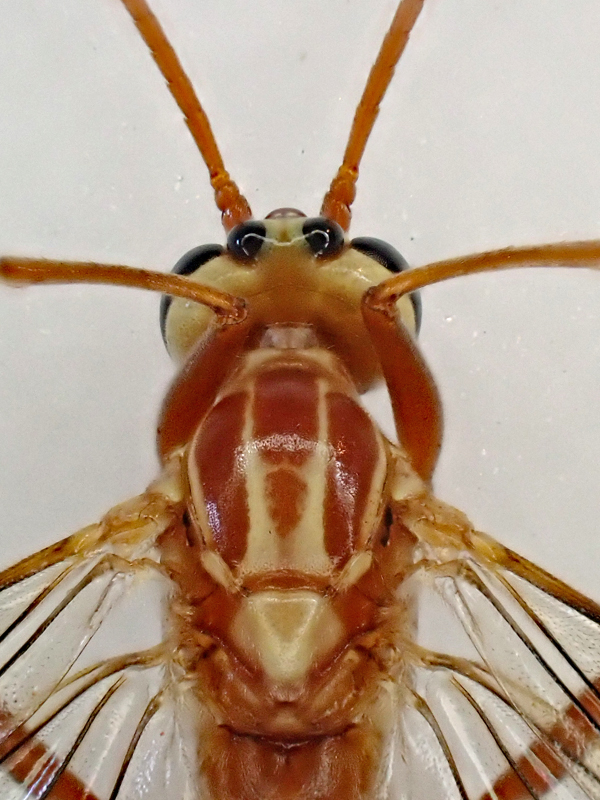 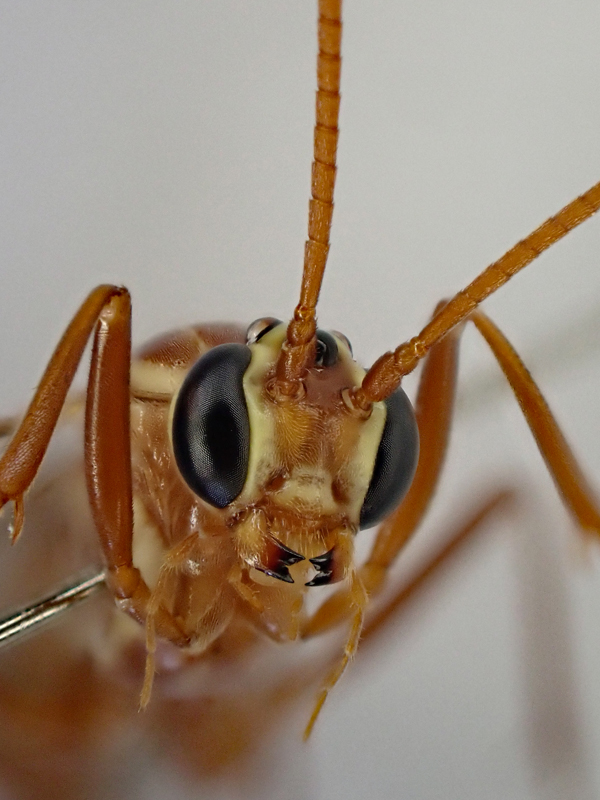 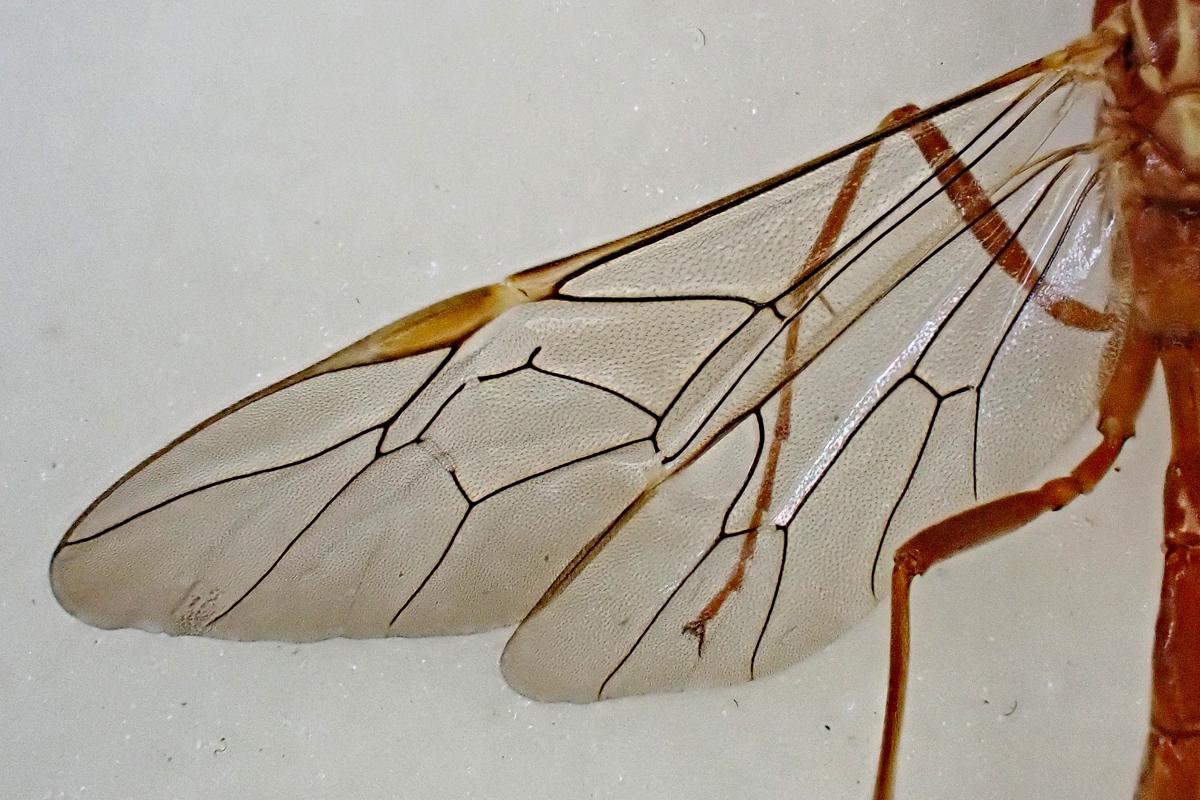 Meanwhile, down under on Tasmania, some local madmen that have been searching for decades reckon they've caught not one but a family of three Thylacines on a cam trap - yes, the extinct and utterly distinctive carnivorous marsupial 'Tasmanian Tiger'. With stripes on the rear end. Whilst the world gulped at the thought, the footage was shared with experts before being released. Current status is that the images probably show a tiny Kangaroo called a Pademelon ..... WTAF!? Can't wait to see these pictures - allegedly to be published on March 1st, maybe should defer to April 1st.
Posted by Skev at 16:14

I duly went to the ash tree at the bottom of the garden on Saturday and added my dot for both fungi.
The thylacine story is bonkers. Spent some time in Tasmania in the late 90s and became rather familiar with pademelons, can't image ever confusing them with a predator!

I can't wait to see the images/footage. The head-honcho of the Thalycine Awareness Group, or whatever they're called, must be on hallucinatory meds or something.

Ash key fungi; suspect these could be on every Ash tree in the UK!

I had both ash key speckles in Uig Wood this week, after being reminded about it by AJC's post. Another Skye resident has seen them this week too, tipped off by the same post. I hadn't realised you were the instigator of it all - top work! I've seen pademelons in Queensland, very definitely more like a wallaby than a thylacine. However, a fella watching two Yowies one night had a thylacine come snuffling up to his feet at point blank range, this was only several years back. Of course, whether or not you choose to believe a yowie watcher is entirely up to you.