First an update on the colour-ringed Black-headed Gull from yesterday - White 7MS. I got the recovery data through early this morning, very quick and efficient! It was ringed as a 3+ year old male on 31/03/2018 close to Copenhagen (København). There have been three sightings of it since then prior to mine, all also near to Copenhagen, so my sighting it the first time it's been reported outside of the Copenhagen area / in the UK. On the following map, the eastern blue dot is Svanemøllebugten somewhere near to where it was ringed, and the western blue dot is Utterslev Mose where it has been subsequently reported. [I've also marked the FC København Parken Stadium with a red dot, where I watched LCFC in the Champions League on 02/11/2016. Because I can.] 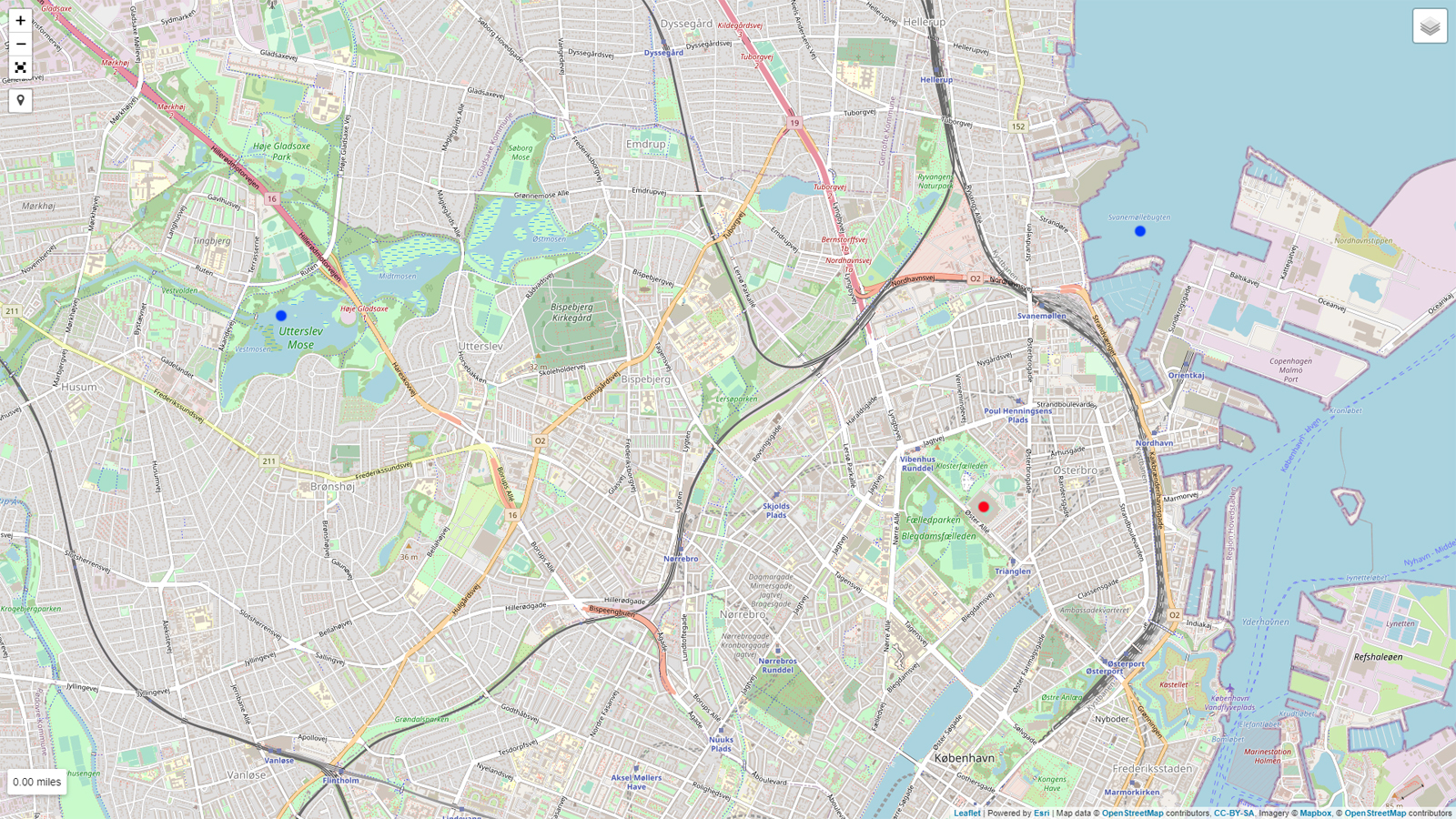 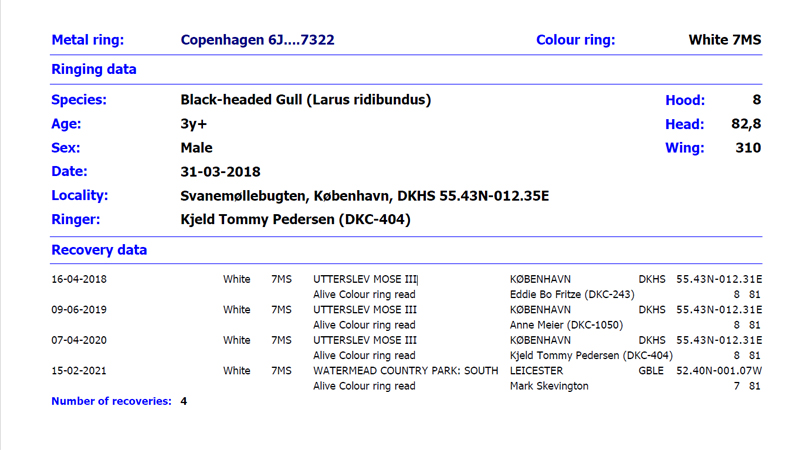 The only bit of the above that seems to not make sense are the co-ordinates which I can't make head or arseholes of. They don't seem to match the site names, certainly not for WCPS - assuming they are meant to be latitude/longitude. Either way, it appears that in a straight line the gull has moved c588 miles from where it was last reported. 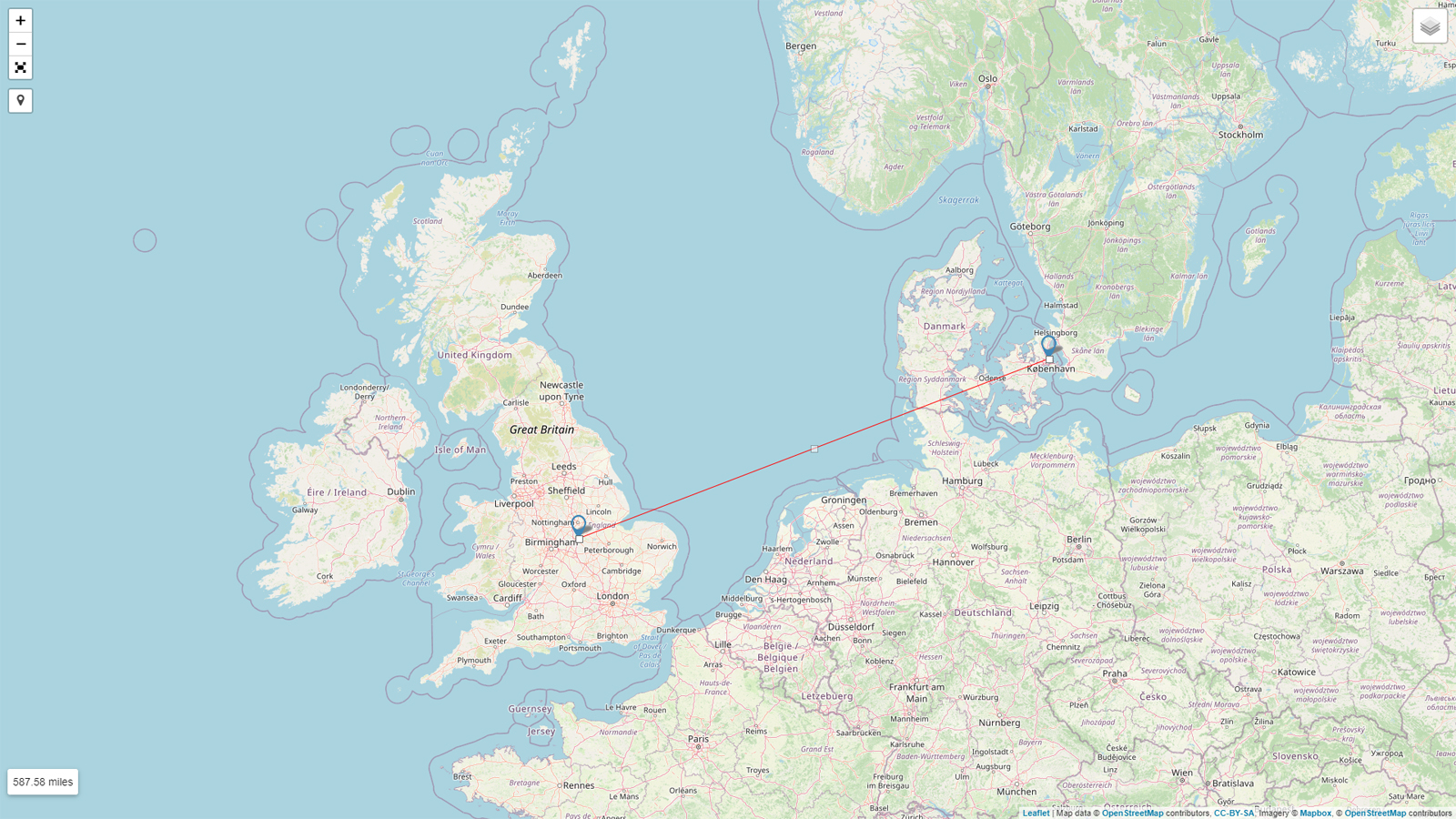 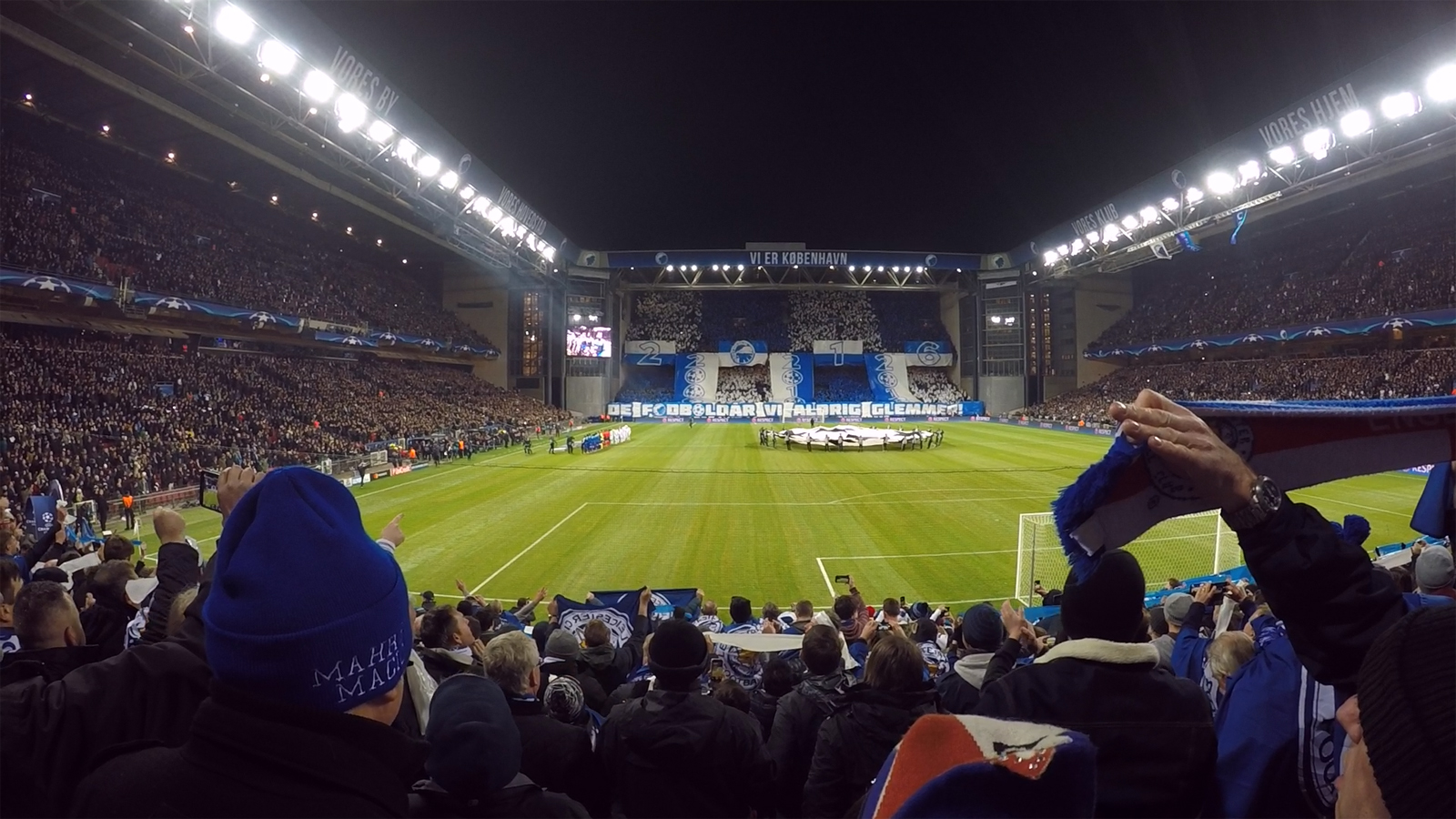 FC København. It was bloody freezing and, disappointingly, their fans did not get the pyros out.
On to today. There is very little permanent open water on my patch, and what there is is not much to speak of either. There is a smallish pit that is just about viewable from Jubilee Park (red arrow pointing at it), the other pits that appear on the map just east of it are not really viewable, maybe partial views from the canal tow path to the north. The other water is a reasonably sized balancing pool at Grove Park (red dot). It is enclosed by industrial units on three sides, but does attract a bit of common wildfowl when not frozen over. I decided to try and add a duck or two to the 5MR list, and more likely add Little Egret to the patch yearlist. 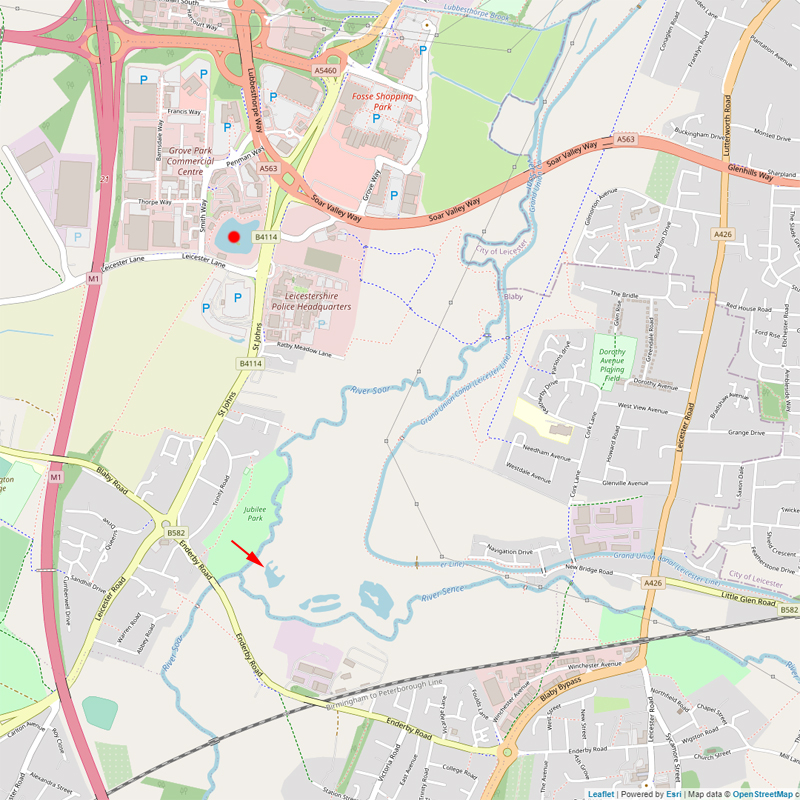 First off I headed to Jubilee Park, where I immediately noted x5 Little Egrets poking around on the grassy area immediately by the entrance. 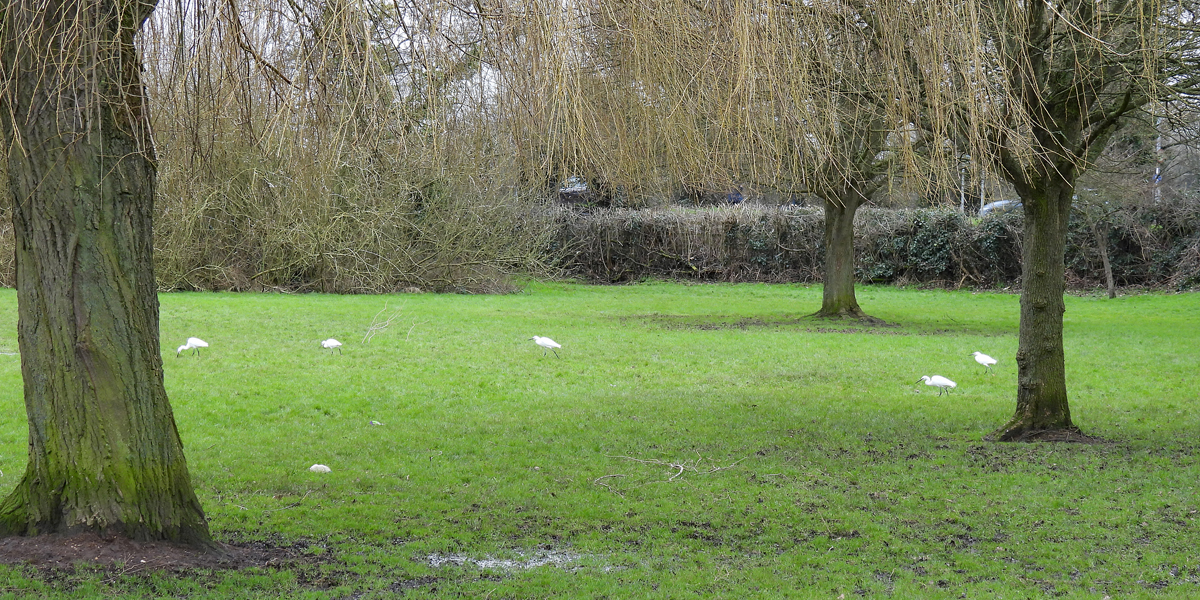 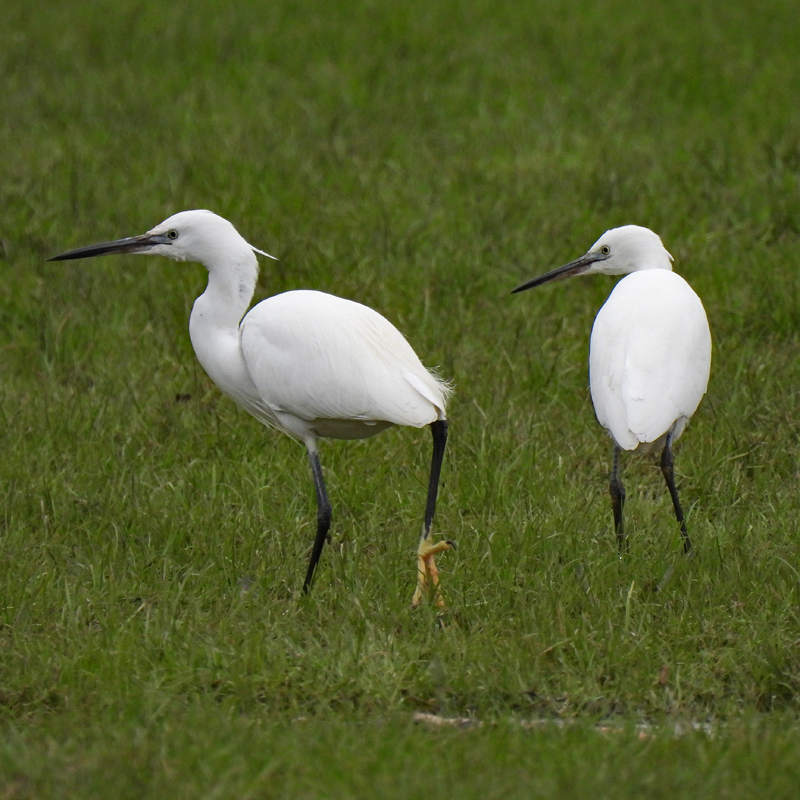 The park was still very wet and muddy from the big floods prior to the big freeze, and the River Soar was still quite high. So still no Kingfisher. The pool was actually bigger than I remember it, presumably holding a fair bit of additional water from the flooding. Here it is just about in view across the River Soar and a bit of cow field. 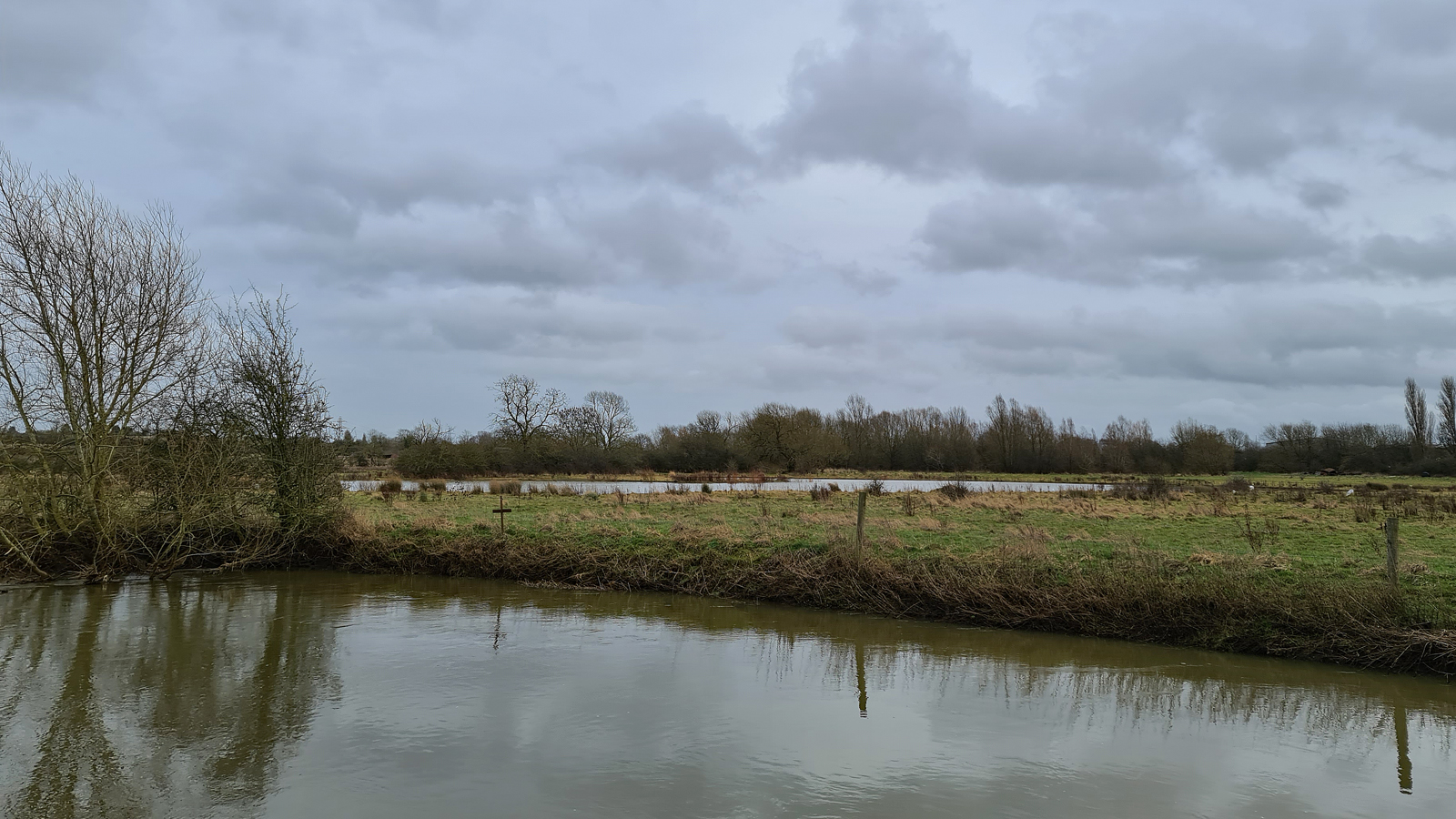 There were ducks on it, albeit very few with c20 Wigeon and a handful of Mallards sitting on the bank. The only duck actually swimming about was a patch and 5MR yeartick .... 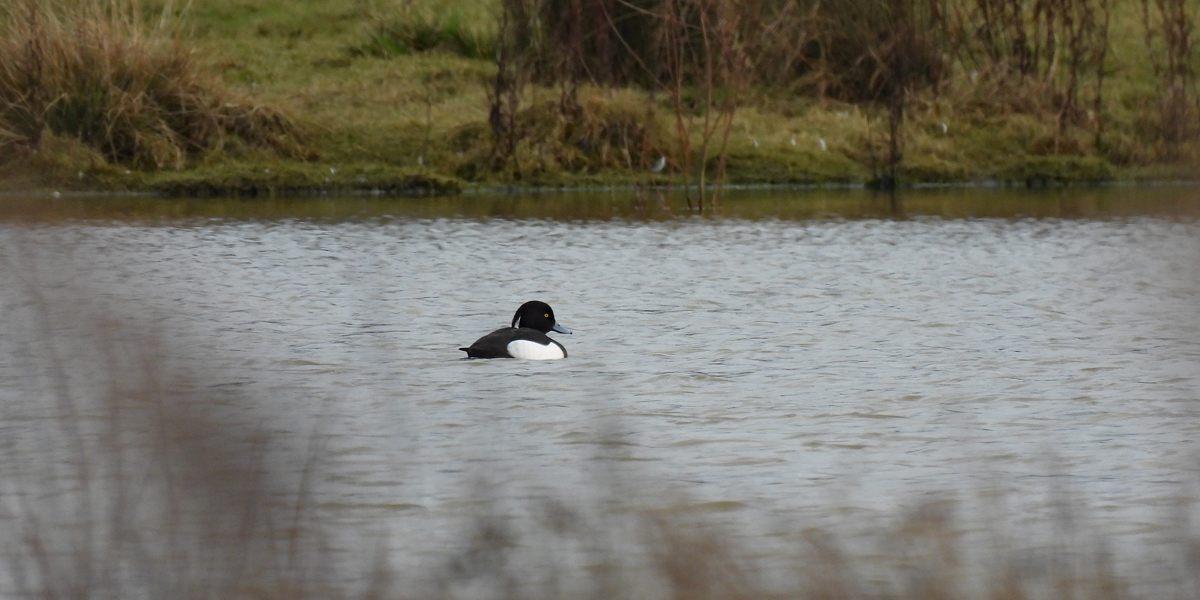 I wasn't expecting Tufted Duck here. A Coot and a Kestrel were also patch yearticks, and there was a good gathering of c50 Black-headed Gulls but all far too distant to bother trying to look at their legs. I walked the whole park, but it was pretty quiet and not a lot moving about. 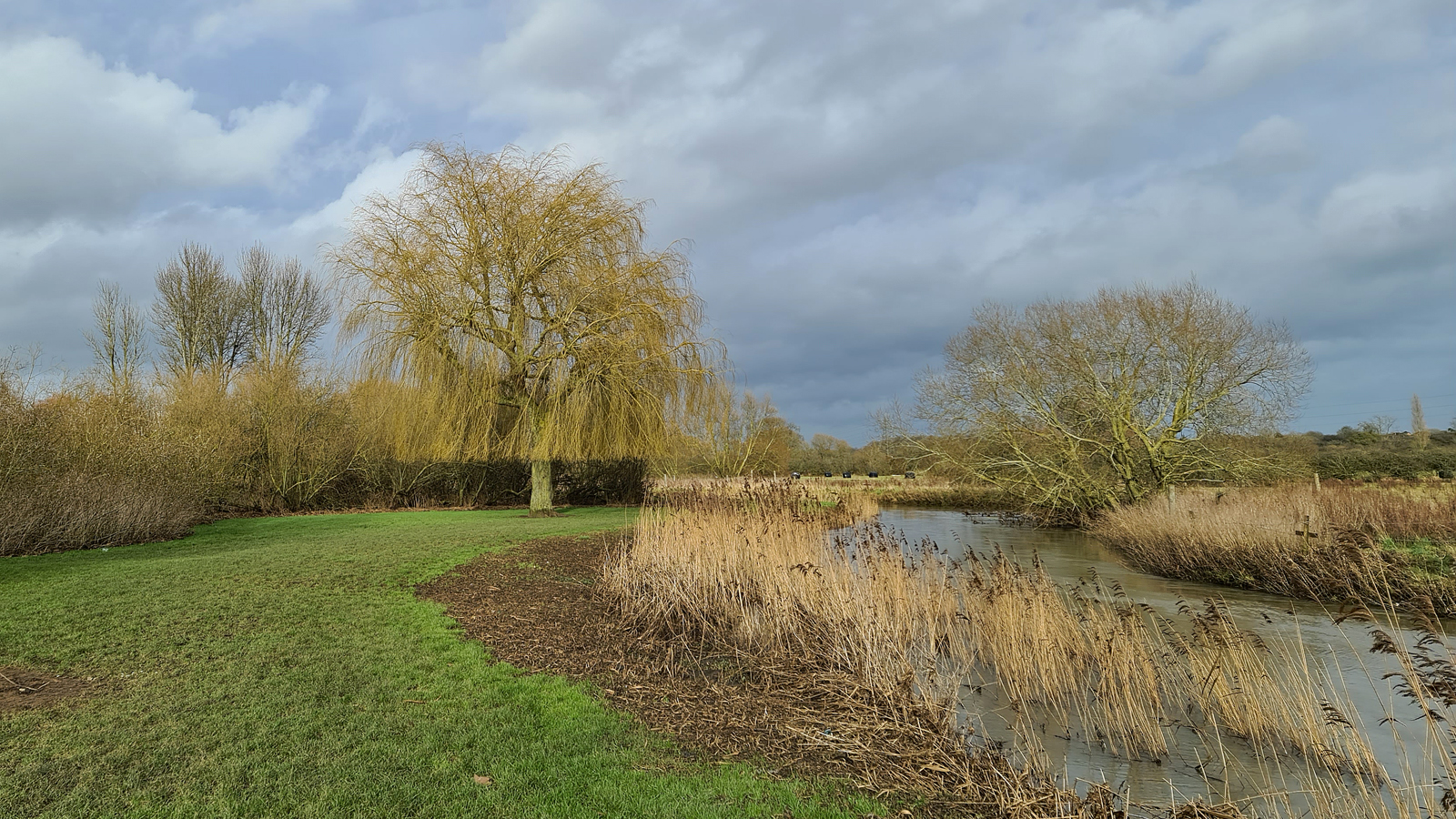 I then carried on up to Grove Park for a look at the balancing pool. There were lots of ducks and geese on show there .... 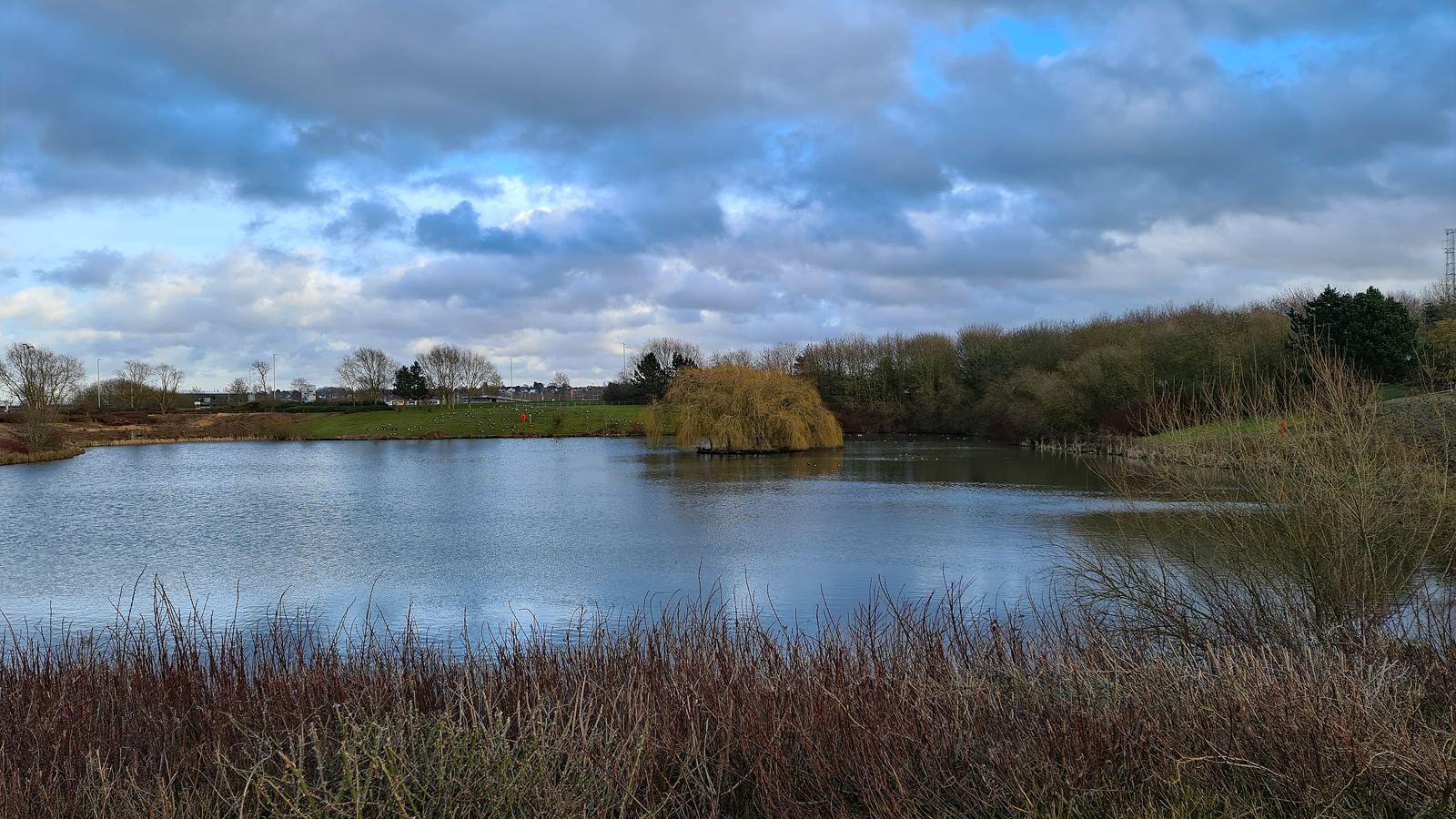 You can perhaps just make out the c150 Canada Geese on the far side, and lots of floating blobs in front and around the small willow tree island. After the surprise Tufted Duck at Jubilee Park, six of them here were more expected. But the remainder of the blobs were another c100 Wigeon and c20 Mallards. Another Coot, a few Moorhens, five Cormorants and a patch yearlist tick Grey Heron were also around. But no Gadwall, no Shoveler, no Pochard. Never mind - I'll have another look here in a few days.
Afterwards I headed down the lane with purpose. Having found the Ash key fungi yesterday, I was intent on finding them closer to home. I also wanted to have a look at that Holly again now there has been a reprieve on the mining fly, and the Ash fungi reminded me to look for Holly Speckle too. I scored on all fronts .... 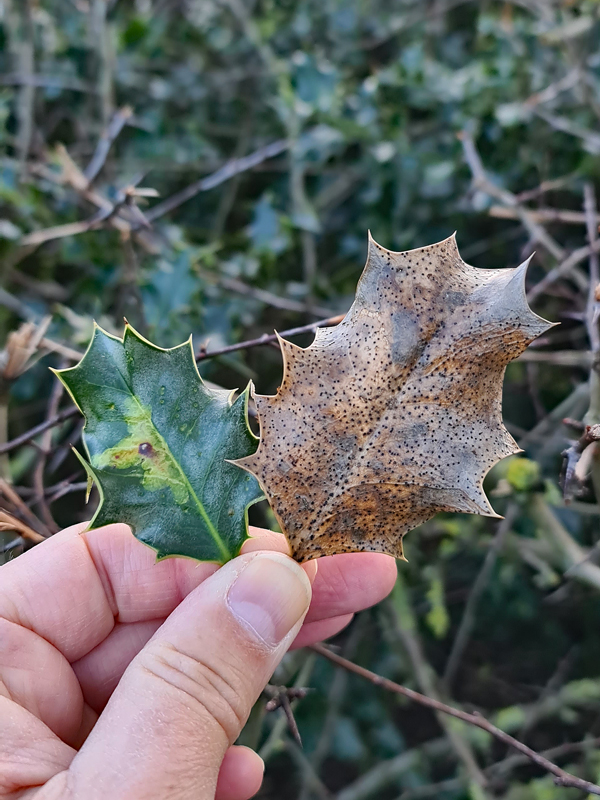 Phytomyza ilicis on live leaf, Trochila ilicina [Holly Speckle] on dead leaf
We have lots of Ash near here, but as I found today the trees down the lane seem to have lots of bunches of keys that are out of reach. I literally could only reach one, and immediately found both species - they must be very common I reckon. 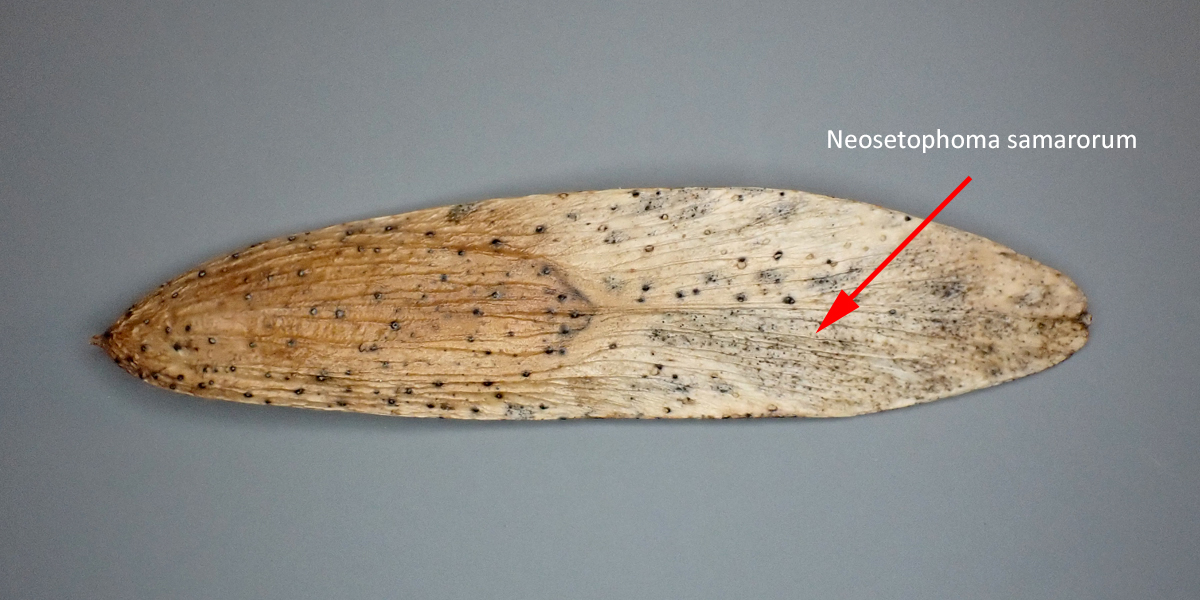 Also down the lane, a regular patch of adventive Snowdrops (that have been growing and spreading here for well over a decade) was in bloom. Here's one of several clumps. 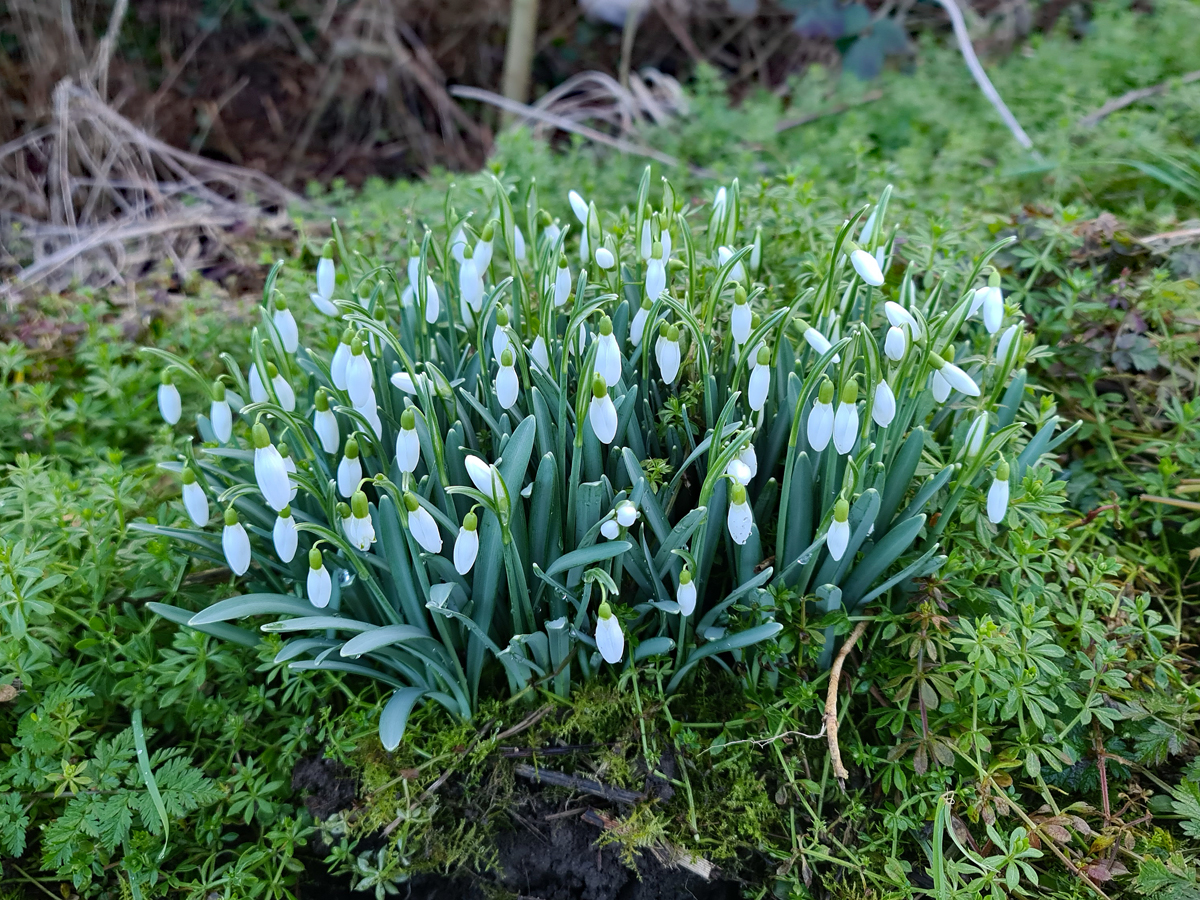 I got a moth trap working, and it's out tonight though I have low expectations. After the deep freeze last week I think it will take a few days of warmer conditions to coax a few early spring species out.
I couldn't think of any witty or tenuous musical links .... here's 5:25mins of aural bliss.
Posted by Skev at 21:54

I still can't get to grips with Little Egrets being inland, it just seems so bizarre to me. I remember finding two in a pit near Guildford, the 3rd and 4th for Surrey and the first multiple sighting, now they're bloody everywhere! (well not quite everywhere - they're not here...) That bend in the river where the reeds are looks absolutely ideal for some flood debris sieving, should be all kinds in there. Get in there before it warms up and they all disperse. Also, be aware that there's more than one speckle on Holly. Bit like your Ash keys.

Never mind Little, we've got a number of Great Whites knocking about too most of the time, generally Rutland Water.

Do you mean Diaporthe crustosa on the Holly? Seems to be scarce here but something to look for.

Three other micro fungi on dead holly leaves to look out for. Two Microthyrium ciliatum & Phacidium multivalve shown here (might be Phacidium in your pic?). Also

Was aware of Phacidium lauri (=multivalve), which shows on both sides of leaf unlike Trochila ilicina. It is in VC55 but not one I've seen yet. I wondered if Seth was suggesting Diaporthe crustosa (= Phomopsis crustosa) which wasn't on radar, and wasn't aware of Microthyrium ciliatum either. Will also be on the look out for Marasmius hudsonii & Pyrenochaeta ilicis when I'm next near any decent stands of Holly.