I've had a great couple of hours or so out in my square this afternoon. It was very mild, and I expected to be attempting to pot or net flies, but the wind was still strong and I saw not a single true fly. But, I did find lots of stuff, though I'm just going to focus on two beetles that are new for me ....

Traveller's Joy is not exactly abundant in my square; there are a handful of long-standing shrubs in one area, with no more within at least a mile or so. The shrubs in my square are right alongside the main A426, so standing around staring at stems is not something that can be done without drawing attention from passing motorists. I had a look today though, with Martin's recent finds in mind, although I hadn't planned for it and was not equipped. I had no zip-lock bags, no penknife and no secateurs - I was after all hoping to be netting flies. After scrutinising stems of all sizes for barely five minutes, I suddenly noticed a number of small holes in a relatively thin stem. I snapped a length off, barely a foot, and bent it over enough to squash into a 75mm long glass tube I happened to have in my bag. Far from ideal, but I figured if anything was in the stems they'd be tiny enough that I'd be unlucky to inadvertently squash it.

As soon as I got home, I emptied the stem onto a sheet of A4 paper and spread out a little. I'd hardly finished tipping out before I noticed a small dark speck wandering off across the sheet. 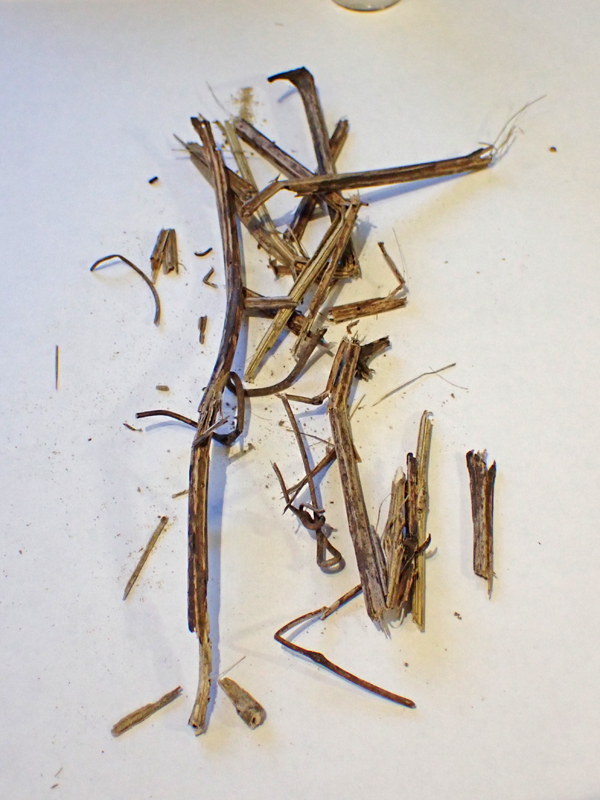 See it there, top-right?

I photographed a hole, and started stripping the stem down into small bits. It soon became apparent that there were several of these beetles .... 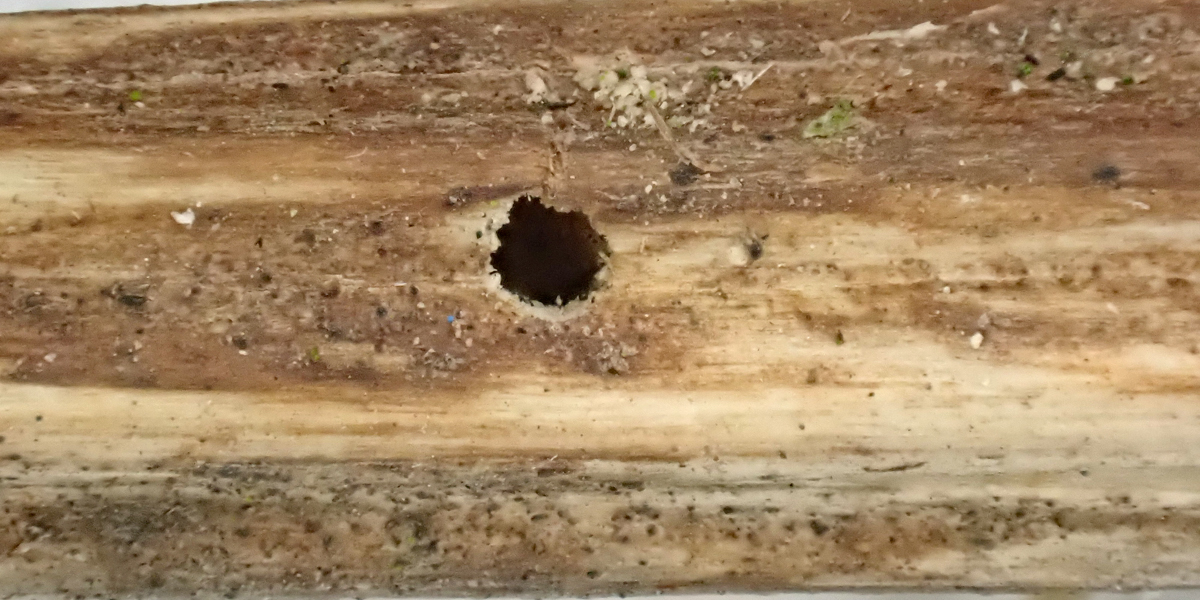 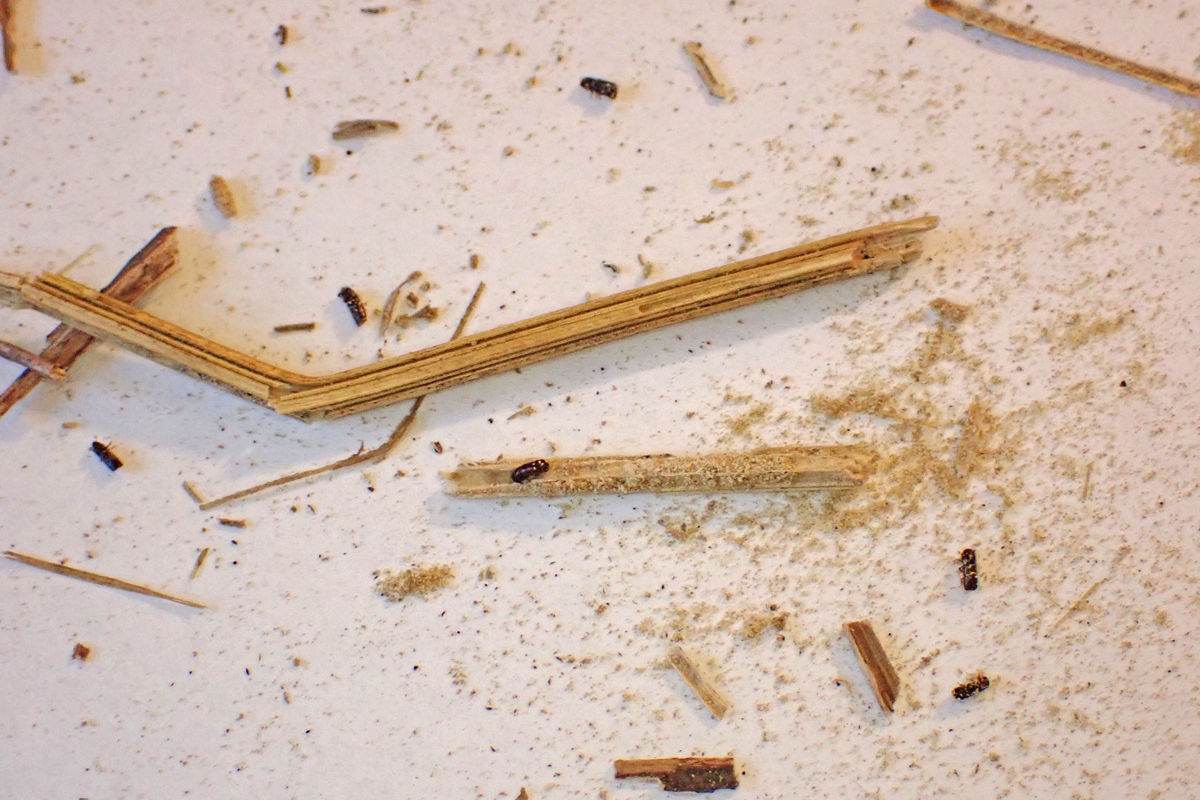 There are six of them in this shot, them being Xylocleptes bispinus. I carried on searching but no sign of the predator that I was also hoping to see (Leptophloeus clematidis). Here's a couple of shots of these tiny stem-borers closer up: 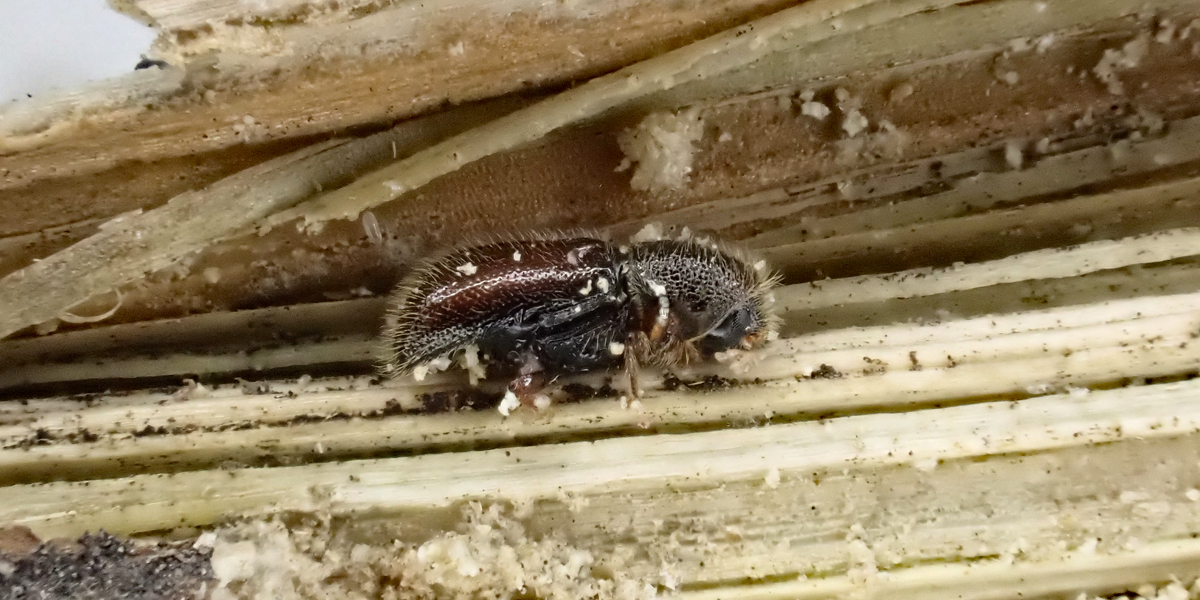 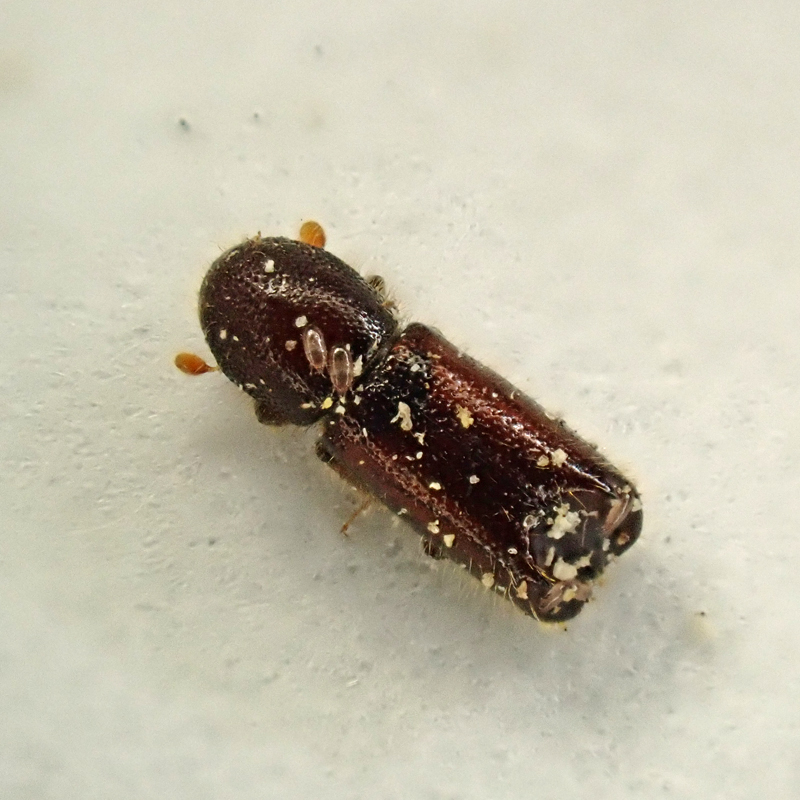 Male
I only noticed after the event that there were some hangers-on (as in the mites on the pronotum and rear end). I checked up and realised that there were no modern records for VC55. Even better, Graham Finch is dismissive of the historical records due to considerable doubt about the recorder mixing up specimens from in and out of county, and considers this to be VC55 First (as will be Leptophloeus clematidis if I or anyone else finds it). I popped a couple into a small vial to post to Graham, along with a couple of very small bits of twig. A bit later when actually sorting out the vial to post, there were four beetles in there .... these really must be abundant! I decided to have another look through the fragments and found another couple, so at least ten in total.
Earlier on the walk, I also spent some time peeling sycamore bark. I found a few bits here (again in full view of passing motorists, including a number of Police cars with sirens blazing). Amongst them were a few Dermestidae larvae. I previously found one during the 2013 square challenge which initially I thought could be Ctesias serra, but the rear-end hairs were not long enough and I had to rear through to eventually confirm it as Megatoma undata. That was in my mind as I watched these scuttle about cobwebs and a number of cocoons of what I assume are one of the Pammene spp. I collected a couple, (along with the cocoons to rear), but looking again when I got home I realised that these actually did have a big rear-end bouffant. I decided these must be Ctesias serra, a view supported via an online query on the British Beetles FB group. 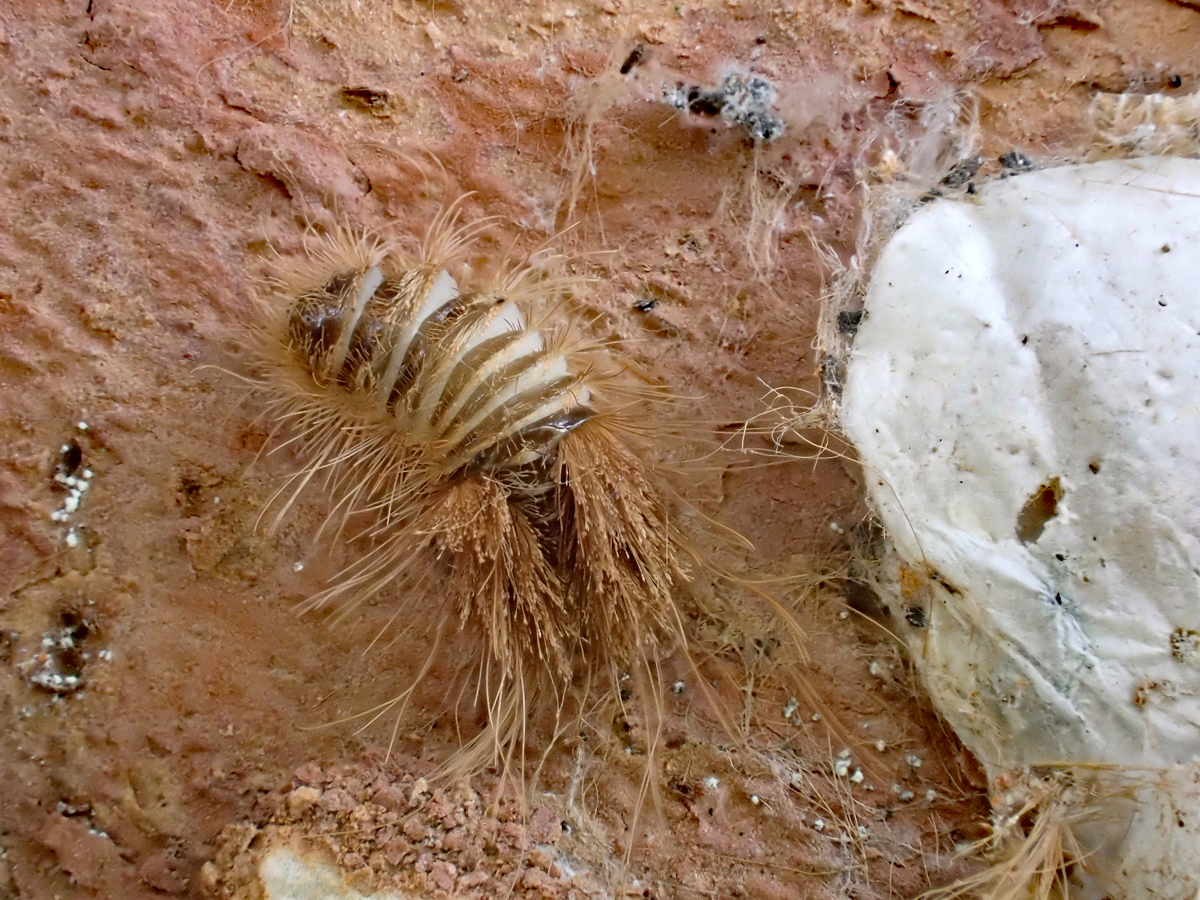 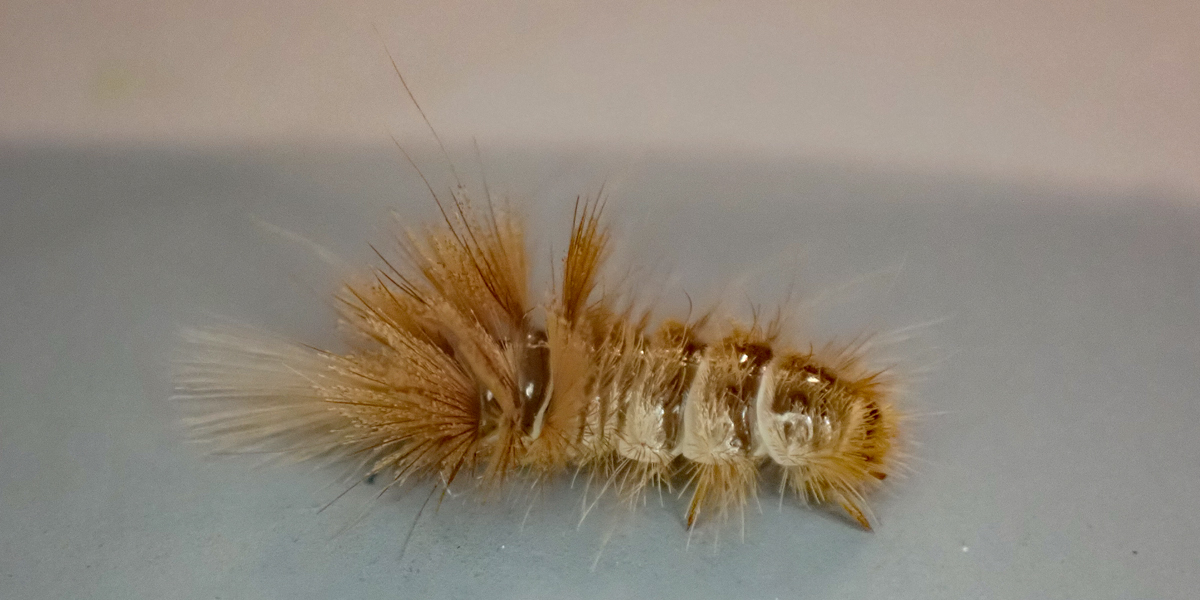 I'm going to try and rear these through anyway on dead insects.
Posted by Skev at 20:51

Great stuff Skev. I feel that I am, from now on in, going to have to wave you goodbye as you power on up the PSL league table, leaving me way behind. Bit like Leicester City and Tottenham...

Pah, I'm getting de ja vu. I'm sure come the spring/summer you'll be finding all sorts down there that I'll never get a sniff of up here.

As for Spurs, you're still clear of Arsenal with a game in hand so surely all is good? Jose out before the summer, then who will come in?

Result! I find life is much easier when you don't care about passing motorists/pedestrians. Hardly any of them ask what you're doing even when it's bizarre. Maybe the more bizarre the better,

Absolutely Ali, but I was just conscious that standing still staring at tree trunks and dangling stems with an eyeglass might not be construed as 'legitimate exercise' ....

Pleased to see you connected with the Xylocleptes. Bit jealous of the Ctesisas, not one I've seen yet.

Yes I was not expecting Ctesias, but there was quite a bit unexpected under the sycamore bark including loads of Bruchus overwintering, Euophrym confine, Pine Ladybird and some bugs.