A Tug and a Rug

Not done much today other than enjoy another LCFC victory, over Villa.

Unlike a great many other people, my garden moth trap has so far yielded precisely zero moths. I was especially hopeful of something last night with such mild temps, but soon realised that was unlikely when stepping out during the evening into full-on late October-like blustery wind. My garden trap never does well in strong wind, particularly in the early and late season which perhaps highlights that many of the moths turning up here have at least flown further than the immediate vicinity.

It wasn't all fruitless though; when I stepped out I had a torch, but stupidly no phone/camera. So by the time I'd clocked the Wood Mouse feeding under the bird feeders, it had already clocked me and was not going to hang around whilst I grabbed a photographic implement. I also found a couple of spiders, and a fly that I managed to pot (as I did have one of those with me).

I knew the fly was either Hellinia or Phaonia, and worked out it was the latter after trawling through some of Mike Hackston's keys and on-line images. I pinned it, grabbed a few quick shots and left it for this morning to try and work through. I have to say it wasn't easy, and I'm not going to spend the next hour walking through the whole lot. But I will post some images with coloured bits on that I think are sufficient to confidently name it as a female Phaonia tuguriorum - again a more than expected common fly. They won't include detailed shots of leg bristles cause I haven't taken any. 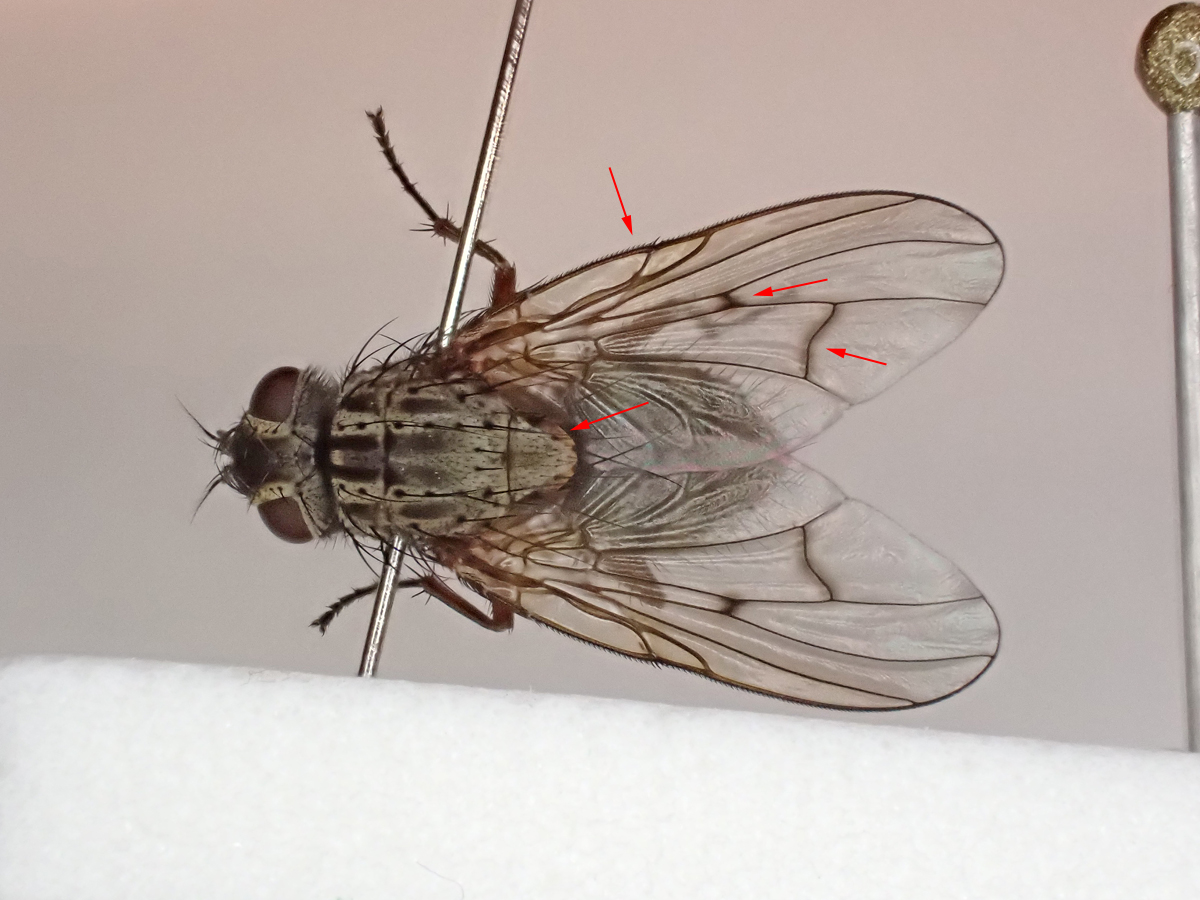 Darkened cloud around cross-veins, slight bulge along costal edge of wing and slight red-yellow tinge to tip of scutellum. 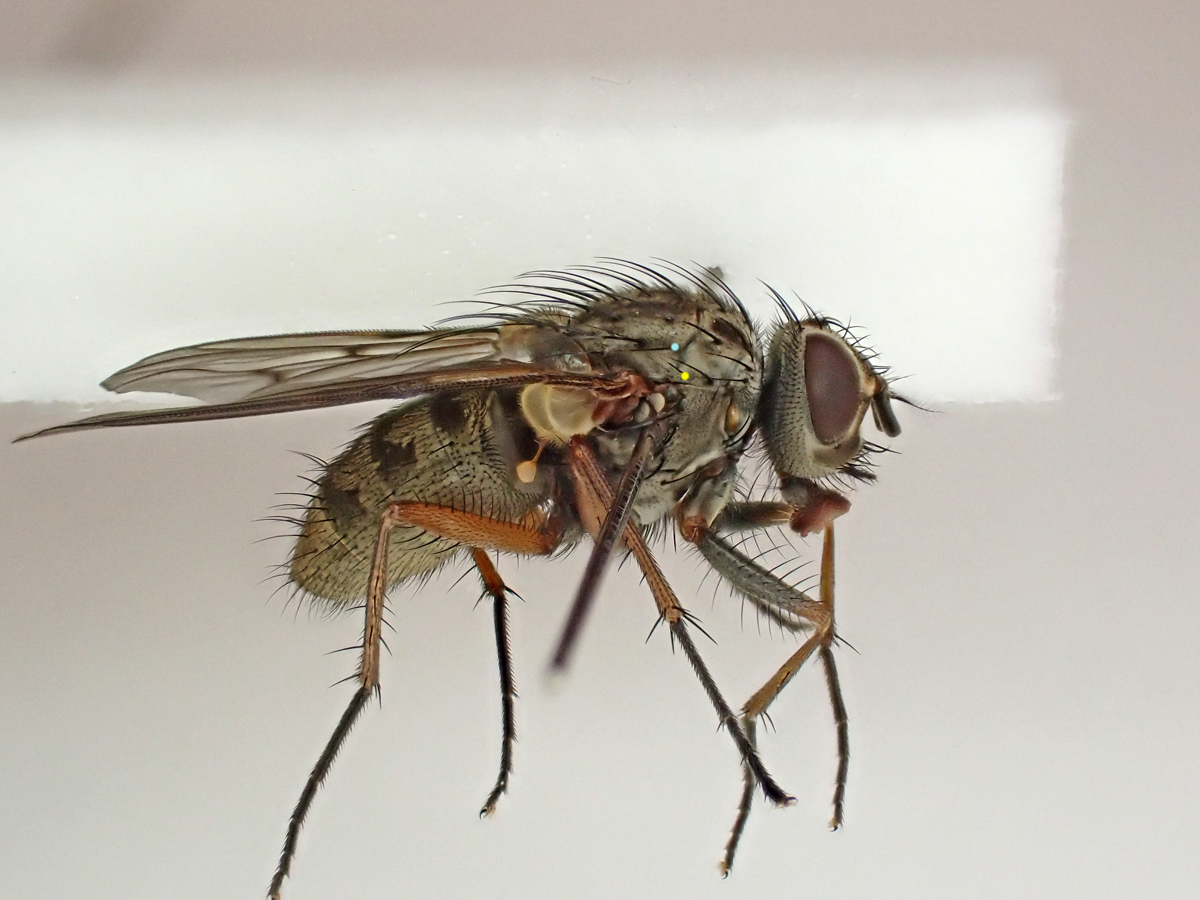 Pre-alar bristle (cyan dot) clearly longer than second notopleural bristle (yellow dot). Not annotated, but profile of face shows mouth edge not clearly more prominent than frons. Also not annotated, but note all femora and tibia are reddish except for the darkened front femur. 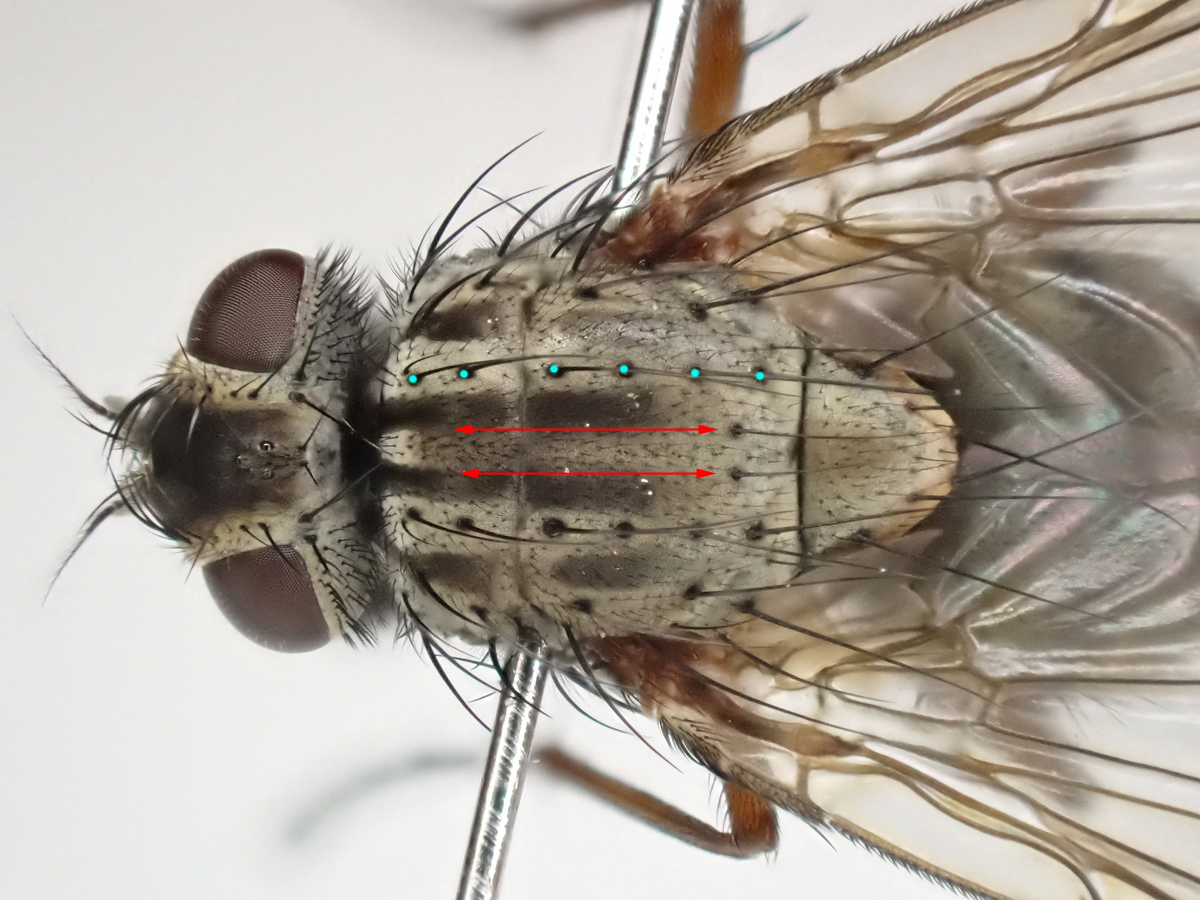 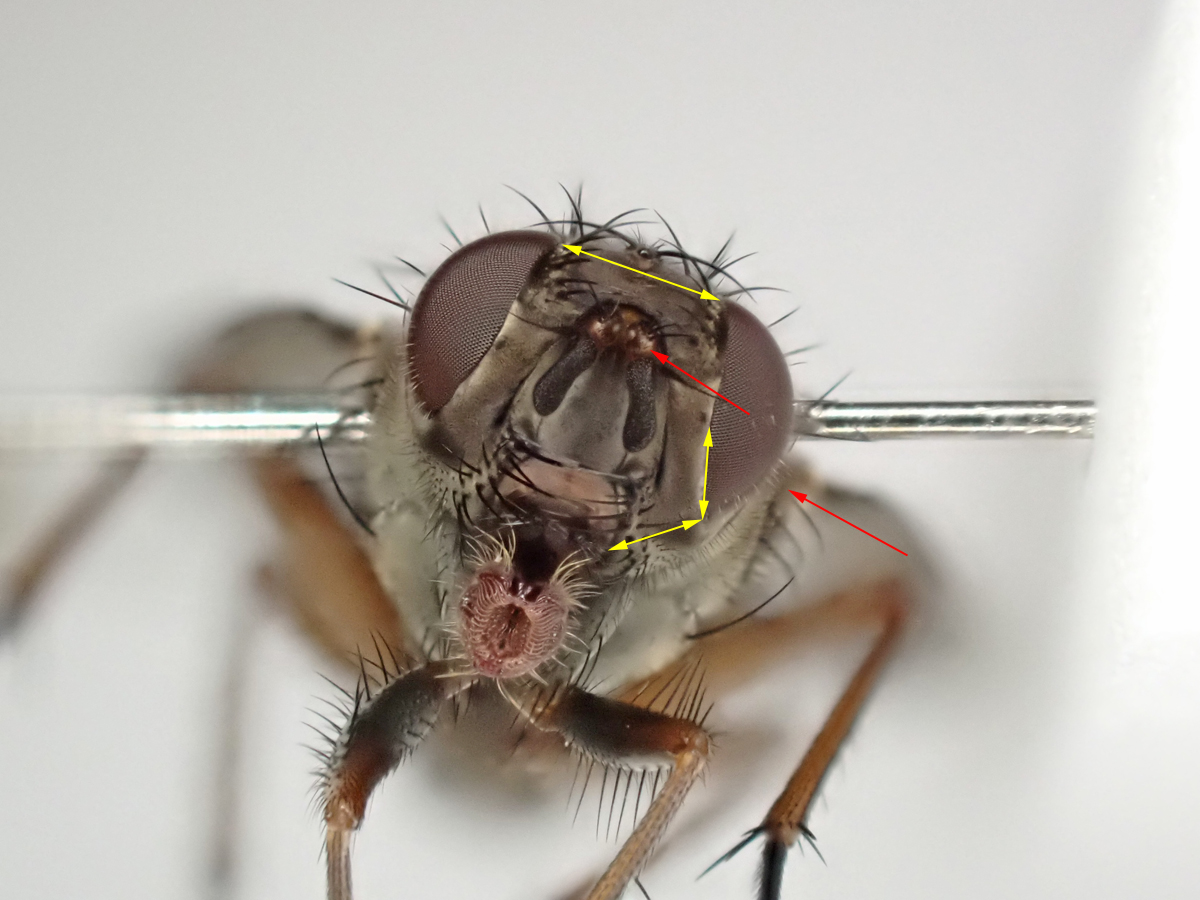 Red arrows: eyes hairy and red-yellow tinge to antennal bases. Yellow arrows: subjectively, frons at vertex more than 2/5 of width of head, jowl at base of eye about same as half the height of the eye. Ish. What I can't see/show are the palps which should be red-yellow at basal third.
Yesterday I finished sieving the flood debris I brought home. As expected, the number and range of beetles increased as I got towards the bottom of the bag - albeit mainly the number and range of small Staphs. There were another couple of both Pterostichus vernalis and Bembidion biguttatum, a couple of Badister bullatus and among the small but at least discernible Staphs I noted one that looked to have an oddly shaped pronotum. I worked it through Mike Hackston's keys as far as Rugilus sp. and saw that looked right when checking images. But I couldn't find a key to those in Mike's file. But I did find one by Volker Assing 2012, albeit one that covered all Palearctic and Oriental regions and the first four species that are separated in couplets are non-British. But the beetle matched up to Rugilus orbiculatus which is by far the most likely species anyway. 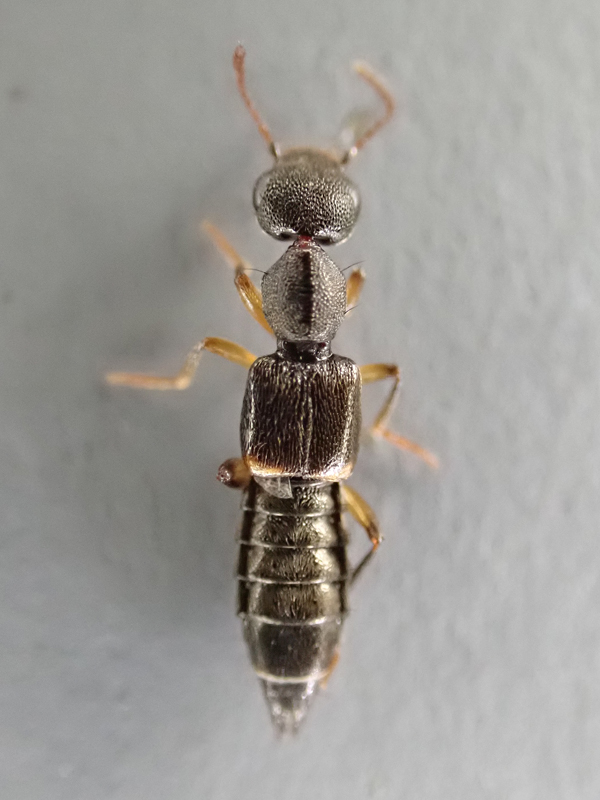 Note the rear angles of the elytra are yellowish, and the femora are yellowish with darker apices. And the odd shaped pronotum! I will get some more debris in the week, but it's still mainly Carabids that I'm hoping for.
Records for these two will be submitted, hopefully there will be none of this ....
Posted by Skev at 20:28

Useful. Just found one of those flies and was about to go trawling for keys and hadn't thought to look at Mike's. Those pics with the TG6?

It'd be a very brief workshop.

Yes Martin, the TG-6 albeit just quick handheld snaps. It seems great for this type of stuff (and would be better if I'd bothered to set up properly with a tripod). But I've used it today for a couple of things and not quite so pleased - I need to start working out some of the manual settings to get the best out of it.