I've not actively been out walking/birding today, mainly I've been working at home. I have added Early Moth to the list which might hit the camera sensor tomorrow, and also a superb female Sparrowhawk flew through the garden just as I was opening the back doors to go and top up the feeders - a fantastic but brief encounter. I've seen a good number of them through, around and over the garden over the years but not one has ever attacked and taken anything from the feeders. The only other addition today, to the 5MR list, was Little Egret. A group of five were feeding in a horse paddock between Whetstone and Littlethorpe, which were only seen as I drove the long way around to get home after another GP Surgery appointment. I'd gone that way to see what the fields around the River Soar were looking like - the answer being heavily flooded again after a couple of nights of continual rain.

The Ribautiana sp. leafhopper I found yesterday; I am convinced that it was indeed a female Ribautiana debilis (found immediately adjacent to a big old ivy bush, no elm for a fair distance) but I need to find another one and show the small size cf Ribautiana ulmi. I've had a quick look today but just a few more Empoasca vitis. I'm sure I will find one in due course so I can get it confirmed.

In the meantime with no other images to share, I thought I'd add some context and information on my five mile radius (5MR) area using this roughly marked up map .... 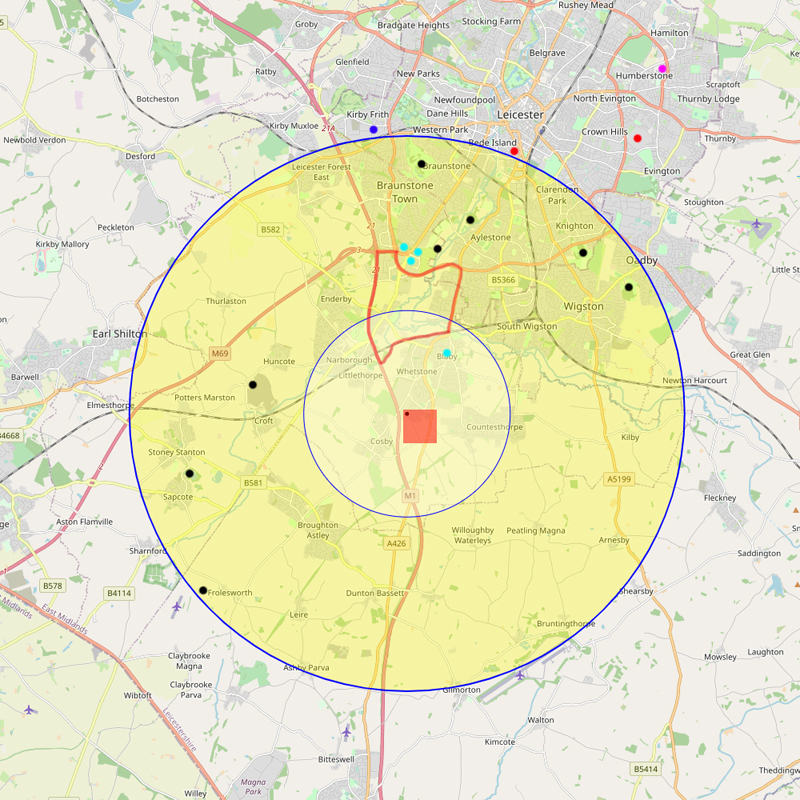 First of all, there are two circles: the smaller inner circle is the 3km radius that I used for 'on foot from home' listing a few years ago, and the large circle is the 5 mile radius. Right in the middle is a black dot marking my home position. The red square shows the 1km square that I am working again this year (not entirely accurate, but you get the gist) and the odd almost harp shaped area that straddles the 3km boundary is my Soar Valley South patch. It seems obvious that whilst I've set a 5MR area, the vast majority of my birding time will be spent within my square and patch.
There are sites within the 5MR though that will be worthwhile visiting (and a couple I already have). Whilst we're in any form of lockdown, travelling to sites for exercise (which regardless of what the Essex Police think, I think can reasonably include walking in isolation with bins and camera) can only be justified if done in conjunction with other legitimate activities. I've marked on a few pointers of places where I am likely to have a need to visit for one reason or another, which may then be tied in with visiting sites for exercise.
First up, within my 5MR, the cyan dot in Blaby is my GP Surgery which I'm currently going to two or three times a week to see the nurse. Parts of my patch are literally a couple of minutes at most from here. The cluster of three cyan dots just to the north of my patch is the Fosse Park shopping area including three supermarkets - fuel and food! Again, parts of my patch easily accessed from here. Outside of my 5MR, the two red dots are the Leicester Royal Infirmary in the City and the General Hospital to the east. I'm going to the LRI every three weeks for blood tests, oncology reviews and chemo, and have occasional review appointments with my surgeon and scans at the General. The pink dot is where my Mum lives (alone, we are her support bubble). Finally - and probably least likely to be relevant for a while yet, the blue dot is where my workplace is (which as a food packaging factory is permitted essential business).
The main sites within my 5MR but outside of my patch and square that will/could be useful for birding through the year are marked with black dots. Most of these are to the north-north east and are clustered near to or on the main route to places that I have a need to visit.
Working anti-clockwise from 3 o'clock:
Further round to the west, there are three sites that I will visit, but probably not until we're out of lockdown:
Virtually everything between due east and south-west is open farmland - I'm sure there will be stuff there, but visits to this quadrant will be incidental.
I am effectively maintaining five separate bird yearlists in conjunction with all this: first and foremost the 1Km square list, and also my garden yearlist as a subset of this; a patch list; a list for birds seen outside the square and patch, and of course the overall 5MR list.
I quite like this VNV Nation cover of Circling Overland; the original by Front 242 back in the late 80s was a slower tempo.
Posted by Skev at 21:02

Maybe it's just my eyes... but your drawn 5km radius circle appears much larger than it should be when compared to your 3km radius circle.
The ratio appears more like 8:3 rather than 5:3 ?

Ah ! Just woke up and realised my error.
Glad your brain is working better than mine !
Back to bed...
K

At Brocks Hill, Lucas' Marsh is a hidden gem.

Yes Alan, I'd like to have good look around there in the spring - haven't been there for a good few years.