I am not surprised that the rural Daily Mail readers that surround the seat that I live in, and others like it, continue to blindly vote for any old Tory regardless of policy, record or ability.

I am not surprised that there was no majority for any progressive party.

And I am not at all surprised that Brexit appears to have overshadowed everything else.

But I am surprised that regardless of the last nine years, the swingeing cuts and the rise in the equity gap between the top and bottom, people in what have been Labour stronghold seats turned to the Tories and delivered their biggest Parliamentary majority for decades. What the actual fuck!? I at least expected another hung-parliament.

People seem to have voted based on the mass media's terms: their destruction of Corbyn's character and their complete failure to properly scrutinise the Tories and in particular Johnson himself.

As for Johnson:
If people have voted on personalities rather than policies, then apparently being a shambling incoherent scarecrow is good enough. Either that, or people were sufficiently brain-washed by the continued use of robotic three-word mantras (Get Brexit Done, Dither and Delay, Oven-ready Deal).

Anyone actually thinking that Brexit will just 'get done' and that we'll never hear about it again is clearly deluded. There will be a rapid unopposed clearing through of the Withdrawal Bill and we will depart from the EU, on Johnson's terms and with the continued risk of crashing out with no finalised trade agreements with the EU in the transition period. Yes, the transition period where there will be more negotiating.

Meanwhile Johnson and his far-right cronies will be working on trade deals globally. Particularly with the US, where I have no doubt we will be completely screwed over and that will be the root of the deregulation, further privatisation of the NHS, reduced protection for the environment, lower consumer rights and protections etc that I fully expect the new Government to deliver. I can picture the negotiating position now ...... 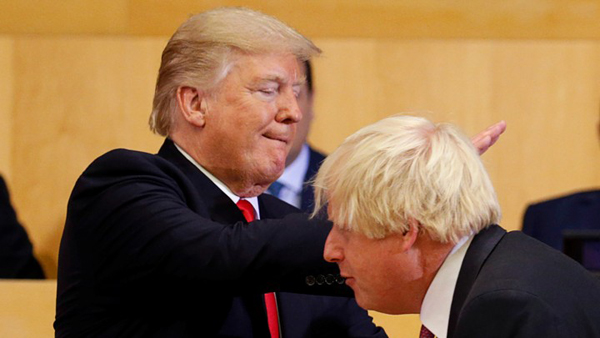 "Get down there BloJo, and be sure to swallow."

I am lucky enough that whatever the result I and my family will not be likely to be massively impacted, but that's not the point. Thousands across the country will be, and it baffles me how many of these people may well have put the cross in the box that seals their continued impoverishment.
Posted by Skev at 18:09