Yesterday morning was very cold again with a crisp frost, but the skies were slightly clouded over and the light was a bit crappy until later in the day. I headed over to Swithland Res for a quick scout around, mainly so that I could get the 2012 moth yearlist off of zero.

There can't be too many sights and sounds more evocative than whistling Wigeon and Teal on a still early morning reservoir with a chuffing steam train running in the background - click for big and imagine it ... 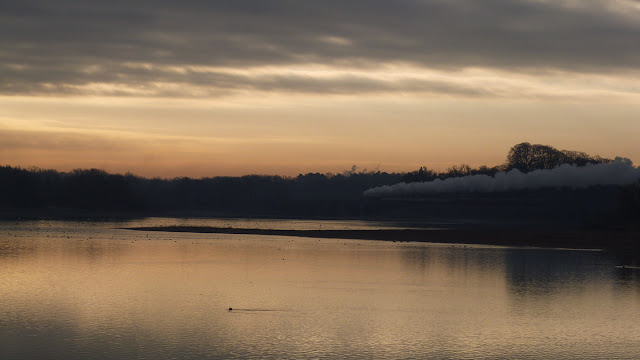 Other than the usual wildfowl, there was nothing too exciting bird-wise though a Peregrine in the usual tree and a Grey Wagtail along the usual stretch of the dam made it on to the yearlist.

A good search along the Kinchley Lane, dam and causeway walls produced six moths - all in the larval stage safely tucked up inside their cases. Aside from a handful of Coleophora serratella, they were all member of the Psychidae (or bagworms as they are sometimes called). 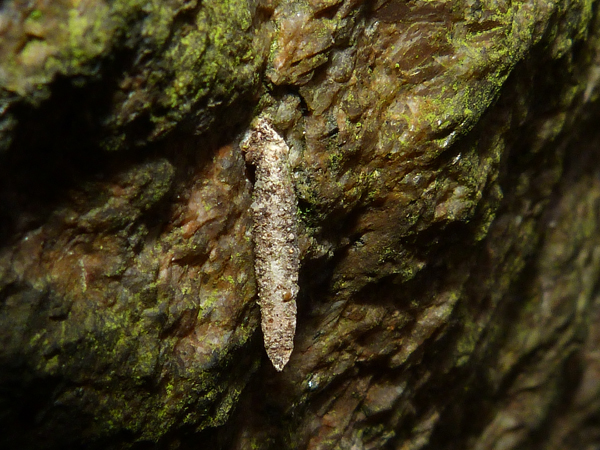 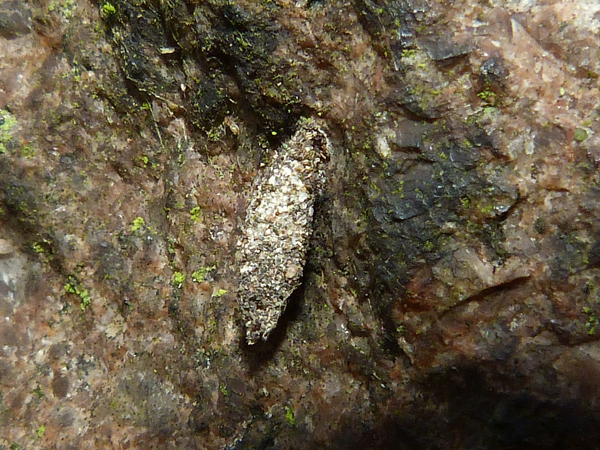 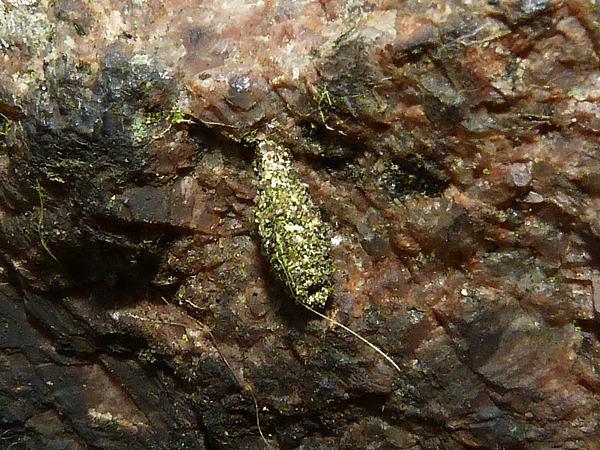 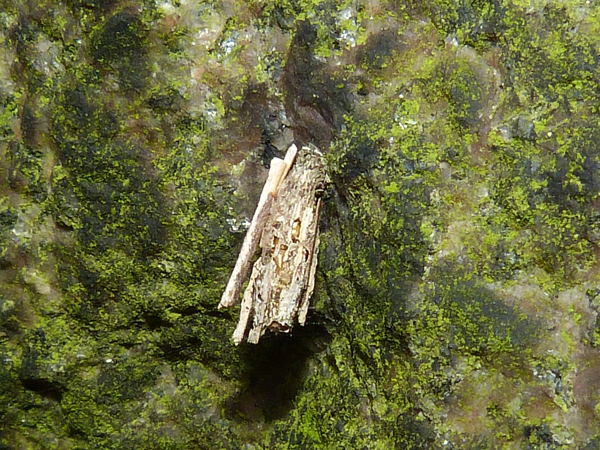 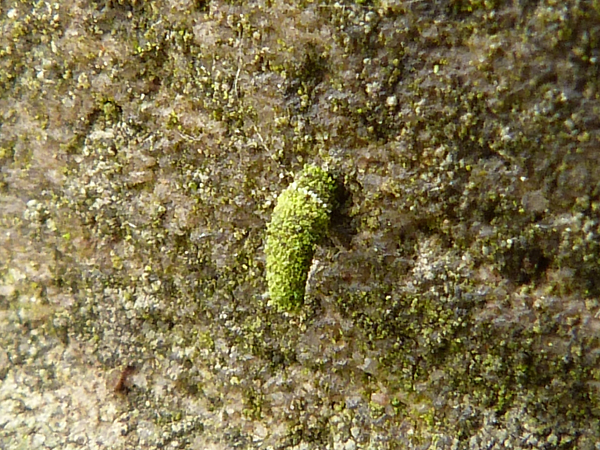 Luffia ferchaultella (or lapidella f. ferchaultella depending on which Taxonomist you talk to)
The Dahlica spp. are not generally separable on the cases alone, however I've seen so many of them and reared a few through successfully over the years so I think I have my eye in for them. Sadly I couldn't find a Narycia duplicella otherwise it would have been an (almost) clean sweep on the VC55 Psychidae.

Next I decided to nip over to Bagworth Heath for a very quick look around. I had Siskin and Redpoll in mind but in fact it was very quiet. A crusty lichen on the fisherman's platform triggered a memory of a recent photo on the Leicestershire NatureSpot, which when I later checked was undoubtedly exactly the same patch. 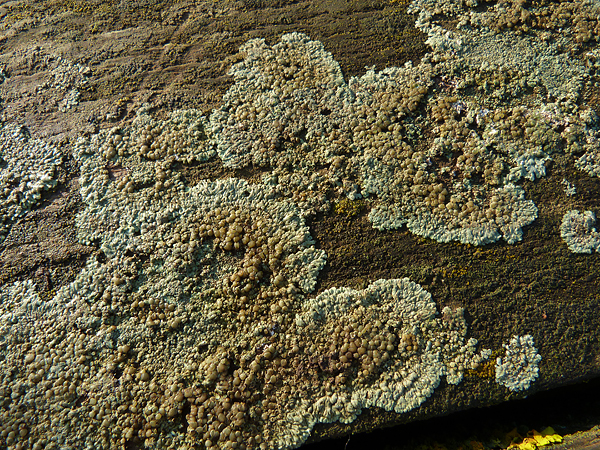 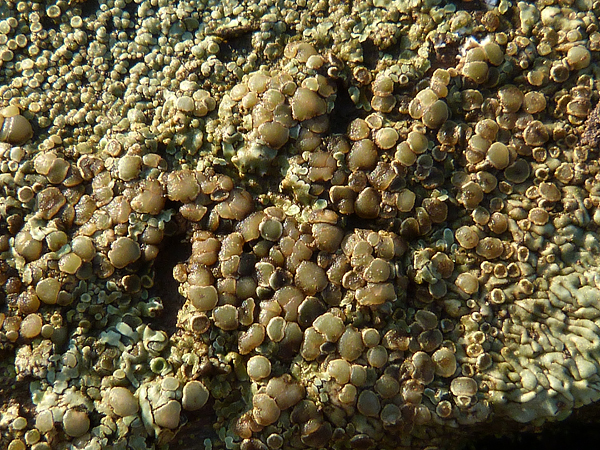 Lecanora muralis
A bit further round the site I found a couple of long-dead logs in damp shade covered in moss and lichen, which on closer inspection were one of the 'pixie-cup' types which I think is Cladonia chlorophaea. 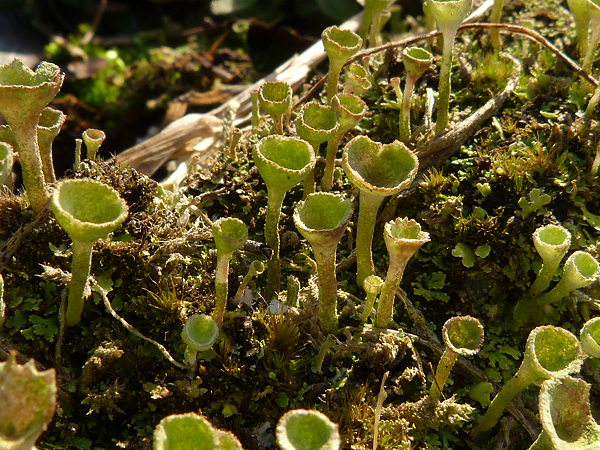 Should be called Shrek's Ear Lichen

Also on the same logs was this fungi, which I think is Hairy Curtain Crust (Stereum hirsutum). 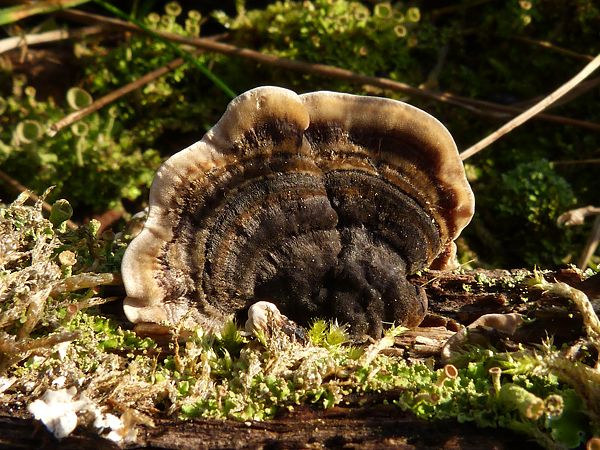 Heading out for a whistle stop business trip tomorrow, though not sure how the travel was planned! It's two flights (Birmingham - Amsterdam - Budapest) followed by a 2-3hr taxi ride to Kosice tomorrow, all day meeting in our plant on Wednesday before heading back to Budapest, and then the return flights very early on Thursday morning. I doubt there will by any time to actually see and enjoy any of the places ........
Posted by Skev at 22:49

A 2 day business trip is it mate! All hard work and boring meetings!
Or is that what Mrs Skev thinks?
More like a 2 day blow out in Amsterdam.......go on get in there!!!!

That close up on the lichen should be Shrek's ear! I really love that close up:)

Ah Stewart - a fan of Finbarr Saunders in Viz?

If only Paul - but sadly the only bit of Amsterdam I saw this time was between gates C and D in Schiphol. Even worse, I've been driven though just about the whole of Hungary in the dark, and the only bit of Slovakia I saw in daylight was our factory. A shockingly bad business trip from the perspective of seeing new places.

Thanks Rohrerbot - that lichen certainly was other-wordly when getting up close.

Damn! I was going to make some Hairy Curtain joke...

Interesting post. A friend and I are finding quite a few 'bagworms'. What literature do you use for identifying these?

The only book I have covering the Psychidae is:
Moths & Butterflies of Great Britain and Ireland Vol 2
http://www.atroposbooks.co.uk/acatalog/info_M041.html

You may well struggle to find a reasonably priced softback copy these days.

Cheers for that! The link you supplied is a great help. I am now confident we have two of your bagworms namely Psyche casta and Taleporia tubulosa. Will keep looking for more.