A lazy day today - too many late nights etc so I opted for a lie in and late breakfast before taking and posting the Winter Moth photo.

Around midday I headed out for a walk down the lane. Whilst I won't be regularly posting the details, I am also going to maintain an 'On Foot From Home' list this year - more out of curiosity than anything. Whilst the garden list is known (and small), there are a good few species that I have seen on walks in and around the Whetstone that are not on the garden list. I anticipate that the total will be very moderate indeed (70ish species) as there is no open water nearby - just brooks/streams. I see the odd Mallard and flyover geese/swans but otherwise wildfowl will be sparse. Equally there is no real prospect of many wader species.

Anyway, after the walk today and with a few bits from the garden the inaugural OFFH list stands at 33 species. There were a couple of good flocks of Redwings and Fieldfares knocking about, plus a Great Spotted Woodpecker, a couple of flyover Skylarks and a Stock Dove. One of the rarest local birds though (ironically) was a small flock of Feral Pigeons! We gets loads of Woodpigeons and Collared Doves around here, but Ferals are not commonly seen. Same can't be said for Red-legged Partridges and Pheasants - plenty of those about. Single Sparrowhawk and Buzzard were smart, but no sign of the usual Little Owls today. The gulls loitering in fields included a couple of Common with the usual Black-headed and Herring for a nice change. 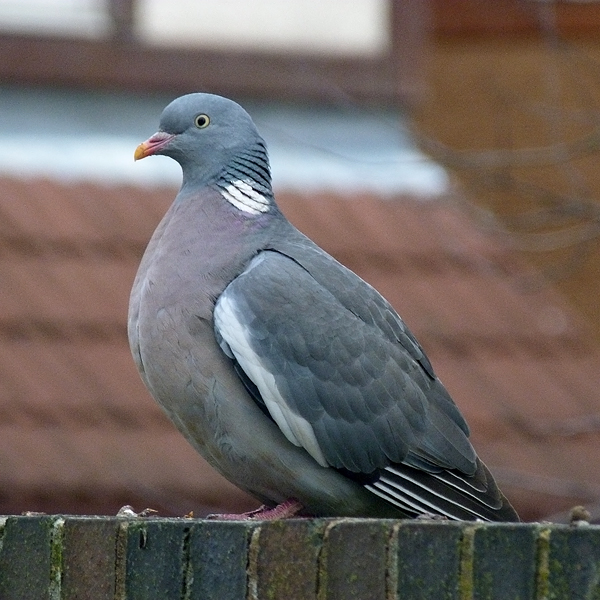 Common local fat bird
After getting home, I narrowly missed a Great Spotted Woodpecker on the garden feeders - Josh saw it, called it and then Alex flushed it by running to the window before I could see it.

Later this afternoon, when it had turned quite dull and pretty nippy, we headed over to Knighton Park with the boys as there is a big play/activity area. The fact that this is within the City boundary and therefore has the (slim) potential to yield any yearticks is immaterial. I saw some House Sparrows here and another Great Spotted Woodpecker, but nothing else new. Several Mistle Thrushes around, plus a couple of smart Bullfinches. Probably worth an early morning visit later in the year.
Posted by Skev at 21:17

Labels: 2011 Yearlist, Down The Lane, Woodpigeon

Just bin reading about you OFFH list and no Little Owls, it may be of some help next time you are "down the lane" to look low down to the left of the tree in the hedge or on the parallel fence slats, but usually a.m. only!

HNY to you too Paul. Had a good look along the fence/hedge but no sign today, but I'll have an early morning look next time.