I headed out early this morning before it was light, and made my way over to Watermead CP North. I was hoping (though not expecting) that the Woodcocks that were loitering around Kingfisher hide last weekend were still feeding openly. I hadn't been to this site this early in the day before though, and didn't realise that the car park and hides were all locked until 08:30 - what a load of bollocks that is.

Whilst I waited, I walked down the main roadway and had a bit of a look around the general access parts of the park. Two things were immediately clear:
1) the big thaw was not complete as all of the large bodies of water were still partially iced over
2) irrespective of this the big thaw was clearly underway as large tracts of paths and land were under rising water

A nice flock of feeding Lesser Redpoll and a flyover party of Goosander (1m, 3f) brightened the mood. As soon as the warden arrived, I brought the car in and headed toward Kingfisher hide. Despite giving it plenty of time and patience, there were no Woodcock today. The bird-feeding table was standing in water, but it and most of the hangers were stocked and attracting a good number of birds - nothing more exciting than Nuthatch and Reed Bunting though. Before long, a Water Rail showed itself though the distance and shockingly bad light meant that only desperately poor record shots were possible (for me and my inadequate photography gear!). 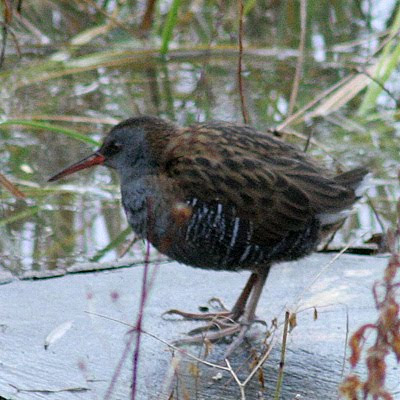 I then headed toward Plover hide, only to be met halfway there by the warden proclaiming that part of the reserve to be closed due to flooding. WTF! This whole area is a fucking floodplain - of course it's flooded and that's exactly why I wanted to go and look at it. I walked around the main path and what I could see of the area revealed a good group of Teal and Shoveler that appeared to be enjoying the sensation of swimming and dabbling again. Then things got surreal.

I noticed a Grey Heron hunting in a ditch, and I decided to try and approach it cautiously from the other side and get some photos. I was almost there, patiently stalking, when a pair of completely fuckwitted pensioners and their dog came right up behind the heron. To be fair, the dog ambled past quietly and completely ignored said heron. Unlike the dog, the adult male fuckwit made a deliberate and intentional approach to the heron squawking loudly like a demented chicken. I called over and asked him, politely, whether his action was necessary. His response was that he didn't like them, and his decrepit partner helpfully added that they eat fish from ponds. I pointed out that this ditch was not a pond, but the heron may well be heading for one now, and advised them that they were fucking imbeciles.

I had just got back onto the main path and noticed a woman approaching with a small dog and a pushchair. Nothing unusual at first glance, then I realised that in the pushchair was another small dog. Eh? First it's all these celebrity twats walking around with them in handbags, and now one being taken for walk in a pushchair. I'm sure there was a plausible explanation, though window-licking eccentricity still seems most likely to me.

By now, the place was awash with dog walkers and idiots - generally all walking in smaller circuits than usual due to the rather large flowing puddles on their usual routes. I was about to throw in the towel when I bumped into the freshly arrived Drunkbirder. He was waiting to meet up with the Tea Boy and look for the Red-crested Pochard that had been loitering about. Seemed like a good idea, so we headed back to Kingfisher hide whilst we waited - still no Woodcock but now two Water Rails.

Dave arrived and we drove back down to the main parking area (having to stop abruptly to give way to a selfish wheelchair user intent on using all of the roadway rather than the sleeping-policeman-free pathway, but with no intention of following usual vehicular conventions like driving on the left and using roundabouts - fucking hell it's not the London Marathon). Dave saw claimed strung a flyover redhead Smew on the way down, me and John only saw a flypast female Goosander.

We got properly booted up for the watery hike over to the waterski pit, and headed off passing a pair of mentalist dog walkers taking their unhappy looking dog for an unintended swim on one of the tracks. The waterski pit is technically off-limits, as it doubles up as a private fishing lake. No fishermen today though, and no Cormorant shooting. We soon found the quarry - damn fine it looked too, even if a bit plastic. 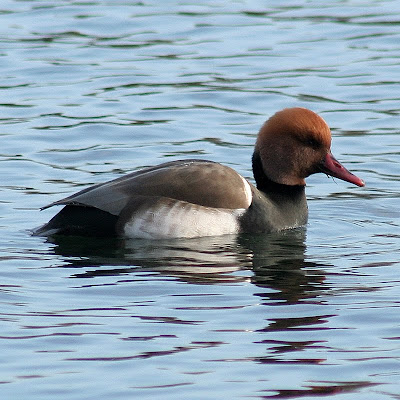 After a good look at it, and more Goosander (1m, 2f), I made my excuses and headed home to domestic chores etc. Despite the frustrations and people, it was good to be out again and I did enjoy the morning - honestly.
Posted by Skev at 20:04

I thought about going to Watermead North today, then remembered it was Sunday, and thus likely to be overrun with the sort of imbeciles you encountered. So I went to Cossington instead. Unfortunately I'd forgotten to take a canoe with me, so that was a waste of time...

Ha! It was good to see you yesterday... birding the Soar Valley does have it's attractions - sadly some of the dog-walking fuckits aren't top of the list. To add balance there are some perfectly sensible dog-walkers.

What made Dave and i laugh were how completely unprepared for a bit of a flood 90% of the park users were... there were even places Dave and I didn't go as our wellies weren't going to be of much use.

We later recieved news of a male Pintail and the female Cetti's on the south section but we couldn't find either.