I was confronted by this enormous beast at work this morning ... 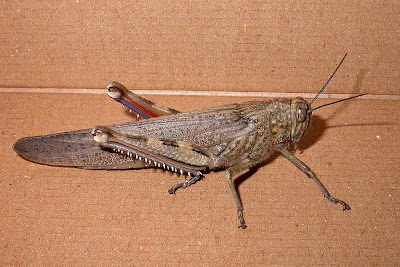 It's even more impressive than the Pine Chafer we had.

My precise reaction was "fucking hell that's big!" - and this was pretty much the same response from everyone subsequently shown it, apart from the women who all screamed. It was sitting on top of some pallets. We'd recently off-loaded some from a lorry bringing packaging in from one of our southern Spanish plants which seems the most likely explanation for origin. I guess it wasn't too happy about arriving in Leicester, as it didn't put up too much of a struggle when being bundled into a plastic bag.

It's an Egyptian Grasshopper, and at just under 3" long (excluding antennae) it is an impressive insect. It's not very colourful apart from a bold red stripe on the back of its massive jumping legs. I'll try and get some better photos on a more appropriate prop in daylight tomorrow - assuming it is still alive. After that it's either one for the Leicester Museum reference collection or freeze dried bird food.
Posted by Skev at 17:12

That is a monster, Mark.
"freeze dried bird food" What species you thinking of feeding it to ?

Haven't you seen the size of Robins round here ;-)
I get a few hawk-moths every spring that something always manages to handle - I just find the wings by the traps. But I was thinking that with the head, legs and wings off, and a bit of judicious slicing, it will sit in amongst mealworms. Would be a waste to just kill and bin in (and technically illegal to just release it, even thouh it has zero chance of survival).