Nipped out at lunch into what proved to be a very gloomy and dull day. I headed off to Swithland Res, stopping at Cropston Res on the way and finding it was devoid of pretty much anything avian, but I reckon this is usually the case here. The species diversity:area and abundance:area ratios at Cropston must be one of the worst for any large open body of water in England. Undeterred by this, I carried on to Swithland Res. After two very mild nights and days, I figured that the water would be mainly fluid and I was hoping that the wildfowl would be back. Wrong. 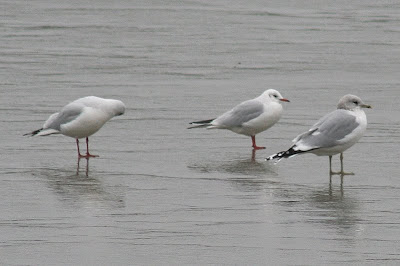 The southen half was still largely frozen and aside from the bread-crazed Mallards, Coots and Mute Swans loitering at the causeway, the only things out on the reservoir was gulls and corvids standing on it. And a couple of Goldeneye. 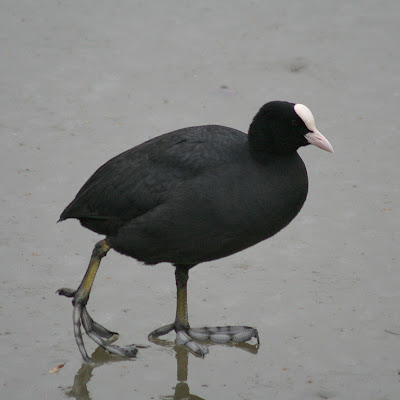 If fucking Heather Mills can do it ... 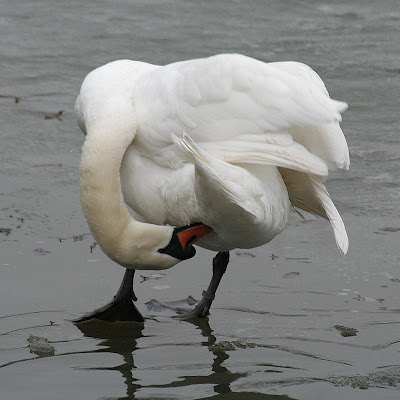 It all gets to much for this Mute Swan, which promptly attempts to disappear up its own cloaca

A superb Jay was rooting around beside a hedgerow on the way down Kinchley Lane. I also spotted some flowering plants on top of the stone walls. Anyone got any educated ideas what these are likely to be - Oxford Ragwort perhaps? 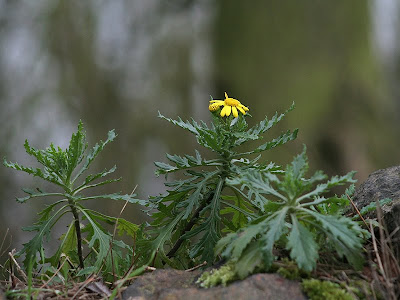 The northern half was much more free, and due to the lack of bread-crazed addicts it was also much emptier of birds. Whilst I pondered on exactly where all the fecking ducks had gone to, the Thornton Mothman pitched up. We concurred that the reservoir was empty. We had a good natter and waited in vain for the nailed-on Peregrine to show itself before I called time and headed back into what proved to be a very gloomy and dull factory.
Posted by Skev at 22:44

It's a ragwort of some sort, most likely Oxford. Not sure what it's doing flowering in January though, especially one as cold as this one has been!

You're right about Cropston Res - I used to do the wildfowl count there and it was mind-numbingly dull. 15 Great Crested Grebes and a couple of Cormorants would be a count count at Cropston...

On the upside Andy... you could claim lots of kudos doing a WeBS count without having to waste too much time. Dave's Watermead North/Birstall patch is fucking huge and probably very hard work/a right ball ache!