Superb clear skies (or at least I couldn't see any dust - reckon they are making it up), bright sunshine, me stuck in office again. I did poke my head out during the afternoon to enjoy the sun whilst on the phone - and was surprised at how fecking cold it felt in the strong breeze.

When I did get away, I dropped past Grove Park to check on the LRPs - both still present and feeding/scuttling about, which was nice. Nothing more exciting than a few foraging Linnets though. I then decided to fill an hour this evening checking some horse paddocks on my patch (near the River Sence on the Blaby side of the Guthlaxton Trail) - surely there would be at least one Yellow Wagtail feeding amongst the piles of horse shit. When I got there, no such luck on the wagtails. In fact, even the fecking horses were gone ....

In one of the adjacent fields, I noted a huge-bollocked bull laying down with a big open wound on its backside where he seems to have managed to rip out his tail. Nasty. Maybe one of the local youths fancied Oxtail Soup. I'll follow up on this with the RSPCA tomorrow seeing as they were closed for business when I rang - no idea who the owner/farmer is.

I did notice some nice pale lilac coloured flowers which I have confidently identified as Cuckooflower (or Lady's Smock if you prefer). Shame I had the wrong camera with me though. 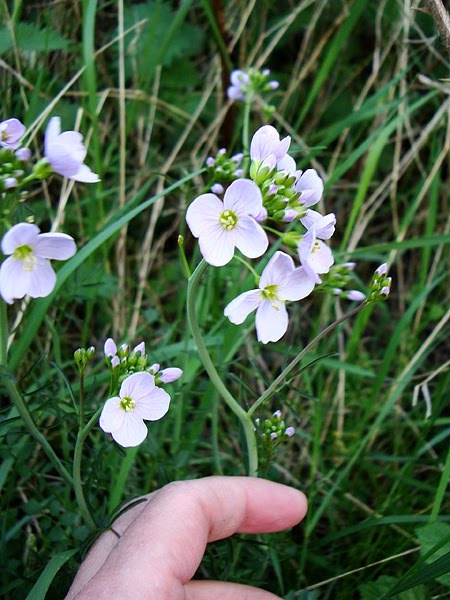 I'll get a better shot next time I go (like in focus and everything)
Seeing as it was birdless, I changed plan and nipped to the other end of the River Sence where it joins the River Soar at Jubilee Park. Immediately I had a small flock of 20 or so Swallows wheeling about over my head - and judging by the masses of annoying gnat type flies that were flying about they were having a feast.

I then picked up a snatch of Reed Warbler singing. Sounded a bit half-arsed and, to be honest, the habitat is not really suitable .... 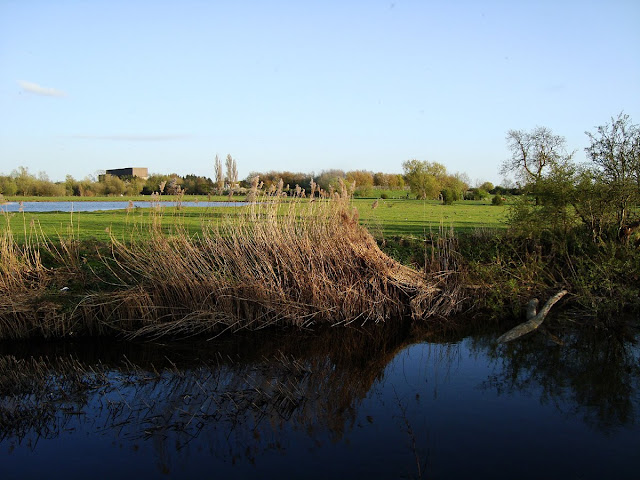 Neverthless, in the middle of that huge reedbed on the river bank there was a Reed Warbler furtively working its way through and making the odd grab for a fly or something. I very much doubt that it will stay!

Scanning across the grass and the pool, I confirmed the general lack of Yellow Wagtails but there were a couple of smart Pieds and also a nice male Reed Bunting. I scanned the 'shoreline' of the pool in the hope of - yes, get in - Common Sandpiper! A patch tick (bearing in mind it's less than a year since I formally adopted the area I call my Soar Valley South patch). I know - I'll get over it. It's been a very long while since I got excited by a Common Sand. I also picked up an unexpected LRP working its way around the pool perimeter aswell.

It was very clear and rapidly cooling before dark tonight, so I haven't bothered.
Posted by Skev at 22:24