Our household is currently pet-less. Over the last few years we have seen off a rabbit and two guinea pigs. A longer while ago, we used to have two cats: one was a typical stay-away tom until we had his trollies off and then he was a useless timid bag of fur cluttering the settee; the other was a young female that was more active despite having been spade, but neither were much of a threat to the local bird population (as at the time we had virtually no garden birds on the then new estate). We had them re-homed with a willing friend once Isabelle was old enough to chase them around the house and terrorise them by pulling their tails.

Recently the kids have been badgering us for a new pet of some sort. I really don't want a dog, a cat would be daft cause we have a nicer settee and more garden birds now, we've done (to death) rabbits and guinea pigs, I don't want caged birds, Nichola doesn't want any small rodents, none of us can be arsed with keeping reptiles. That pretty much leaves just one option - fish.

Before we moved here, we had a largish fish tank with just coldwater fish. Maybe I'm a bit fishist, but goldfish are a bit lame. I'd really love a decent marine tank, but that would be a lot of expense and I'm not sure we could look after them properly yet. So after looking around various outlets today we've opted for a simple tank which will take a modest selection of typical tropical fish. Even a smallish tank full of water is heavy, so we had to get a stand for it as well.

We went for one of these: 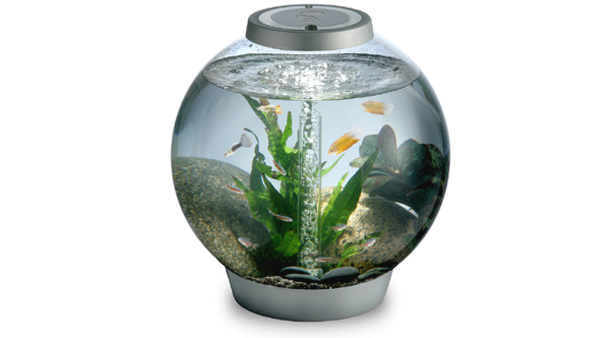 Bi-Orb 30litre, with in built filtration and lighting with an add-on heating element
Obviously nothing in it as yet - we'll leave it to stabilise for a week and gradually introduce fish over the next couple of months. No real thoughts about what sort of fish (other than smallish ones), though ever since I saw the excellent film Rumble Fish I have fancied having a Siamese Fighting Fish.

Rumblefish is a cult classic... a bit cheesy but the music is awesome, think its Stewart Copeland...

I have a 4ft tropical tank and I love it ! Take care and give the tank enough time to stabilise, I had mine up and running for 4 weeks before I put a few fish in....

My favourite fish at the mo are rummy nose tetras, they look good in shoal, they often look pale in the shop, but they brighten up lovely in the tank... also got big shoals of harlequins and cardinals, both are nice and bright...

I thought about marine fish a while ago but decided against when I found out that a large proportion are wild caught....

The place I get my fish from now has a lot of locally bred stuff...

Ah yes Fish.
I've kept them for 15 years, Tropicals that is, there is quite a vast choice available now and once you've mastered Tetra's and Danio's then try something more exotic like Cichlid's they are so beautiful!
Yes don't be put off by drab colours in the fish shops, a pale fish is a slightly stressed fish and once they are home in a less cramped environment they will be stunning.
O and my favourite fish ver the years have been Clown Loaches either keep just one or a shoal of 6+ to avoid bullying.
Tiger Barbs take some beating too again they benefit from being kept with catfish and in a shoal of 15+ as they are abit boisterous!

Fish aren't pets! I had some cold water stuff once, orfes, goldfish and the like and released them into a local farm pond. Coots were licking their beaks...

Now for pets, we have a dog, a Chinchilla, a Masked Lovebird and have had over the years a Ferret, a cat, 2 other dogs, several Budgies, 2 Harvest Mice that bred 21 young for a local reintroduction scheme. Hangers on, the lot of them! :)

Thanks Gary & Ben for the tips - this is only a small starter-tank really so I doubt we'll have anything in shoals, but I'll check out the species you mentioned. If all goes well with this one I can definitely see myself upgrading to a bigger tank in the future.

Stewart - agree regards coldwater fish. As I said we had those before (including orfe and dace) and they were a bit dull compared to tropical species. What do Chinchillas do exactly, other than look like they need plumping up and sleeping on? Must be a fine line between keeping pets and having a menagerie ;-)

Guppies are bright and apparently easy to keep, not my taste tbh, but they look stunning if you're a bit stoned !

Re the clown loach and tiger barbs, both are beautiful fish... I've had a variety of loaches over the years including a number of clown loach, they always get a bit nippy when they grow tho.

The tiger barbs are just naturally nippy so best not to put em in with smaller community tank stuff like tetras.... A real shame because they are stunners, but I've just discovered another barb that looks just like a small tiger barb and isn't agressive..... can't remember what they are called, but I've got a group of 7 in my tank now with all the tetras and no problems at all.....

Another favourite fish in the tank at the mo is my rainbow shark, a bit like a red tailed black shark but with all red fins... crackin !

Oh.... and I've had 2 fighting fish but they both didn't last very long..... would have been better off pouring them into the river like the motorcycle boy !

We inherited an identical bio-orb fish tank and have two smart long finned and tailed Goldfish (I don't know what kind they are) but my sister in law spent a year in Australia and asked if we would look after them, that was a few years back and she didn't want them back. They are now 12 years old...I didn't think fish could live that long. I must admit they are nice but a bit of a bugger to clean out.