Ever heard of the phrase 'death by PowerPoint'? Today I had the dubious pleasure of participating in a 'webinar' which is basically a PowerPoint presentation given remotely over an internet link using Microsoft Live Network. This was in conjunction with a broken English telephone conference call with my counterparts from our plants in the Middle East and Europe. It made for a painfully frustrating hour or so .....

After that excitement I ensured a quicker than usual getaway and headed into Jubilee Park to check out the pool on the way home. 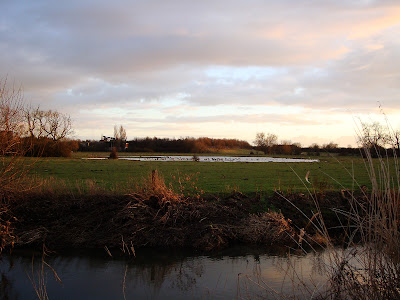 The pool viewed from Jubilee Park across the River Soar

Immediate result in that there were again Goosander on the water, but over the next half hour things went a bit haywire on the comings and goings of this species. When I arrived, there was a drake and a redhead on the water. Shortly afterwards, they both flew off east along with another redhead that must have been tucked against the bank. About ten minutes later, with no sign of them returning, another drake with four redheads flew over heading east. Shortly afterwards, two drakes and one redhead returned to the water. So, a minimum of two drakes and four redheads - but who knows!

This last trio then put on a great display. One of the drakes kept dipping its bill into the water and then flicking its head up with neck out-stretched and bill pointing skywards. Meanwhile, the redhead (clearly an adult female) adopted a 'take me up the cloaca' posture and flattened itself on the water with neck outstretched. In fact it was so flat that a quick scan with bins would have revealed a drake with an unusual bit of driftwood following it about.

Aside from the sawbill action, there were c130 Wigeon, c140 Canada Geese, 5 Tufted Ducks (3 drakes, 2 females), and a smart Grey Wagtail made its way along the River Soar. Surprisingly, there was only a single gull - a Black-headed carcass that was being mantled and pecked at by a Magpie. 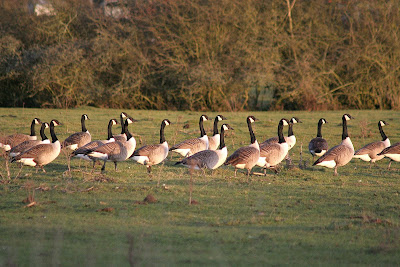 Part of the resident gang

The only other avian interest was a mixed corvid roost gathering in the fading light of the late afternoon. I estimated c250 Jackdaws mixed in with c150 Rooks - certainly not the biggest roost you will see but the noise of the collective calls was still impressive. 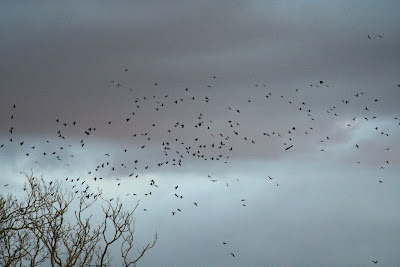 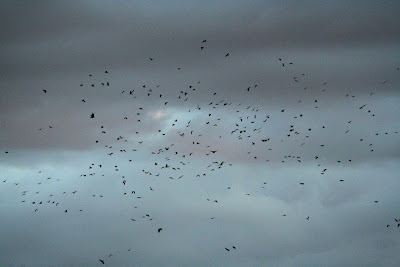 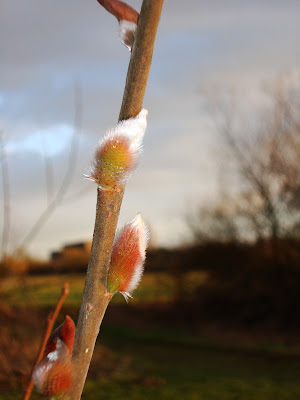 Whatever happened to sending telegrams...