Too dark to do anything useful when I get home from work, and I've left the garden traps off despite the mild conditions as I have no time to do them in the morning this week. So, to fill the gap here are a few old shots of mothing memories. In fact, they are so old that the resolution is pretty crap and I can't make the images much bigger than they appear on this page, so for a change don't even bother clicking on them. 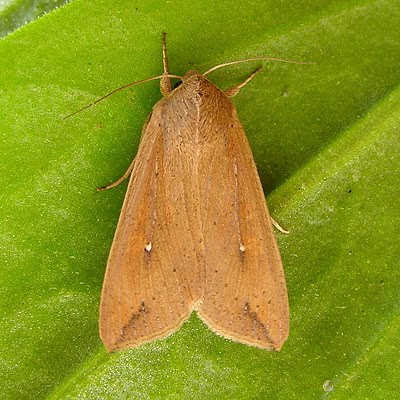 White-speck I was never an annual on Scillies - I genuinely felt that going every year would nullify the enjoyment. In 2001 (my last visit) I stayed at Borough Farm on Tresco for a week with Andy Mackay, Rob Fray and Richard Fray. My two previous visits to Scillies before this were in 1996 and 1999 - both awesome years for major rarities. However this year was the first that I was as much, and perhaps more, interested in the moths we might see. 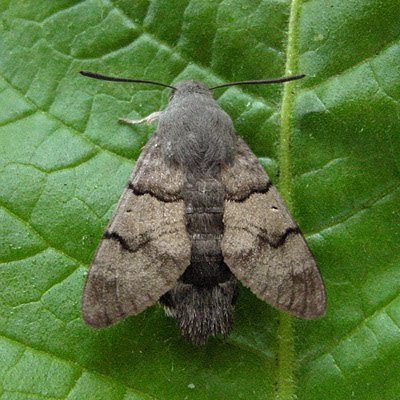 Humming-bird Hawk-moth Turned out to be pretty good, with the species taken in the week including a few fairly standard migrants that I was seeing for the first time like Humming-bird Hawk-moth, Four-spotted Footman, Pearly Underwing, Palpita vitrealis, Vestal and The Gem. Also good local species like White-speck, Shore Wainscot, Cypress Pug and Scillies subspecies of Feathered Ranunculus and Shuttle-shaped Dart. 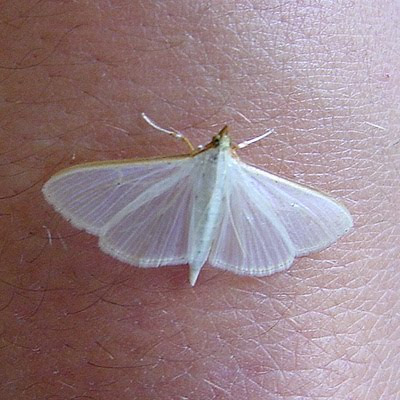 Palpita vitrealis The best night though was 12th October, when the catch included the following: 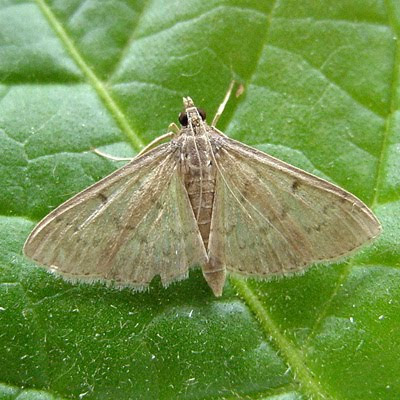 Grass Webworm (Herpetogramma licarsisalis) Once the ID had been established (not straightfoward whilst on Scillies seeing as it is not featured in any British reference books) it was confirmed as only the second British record. This species is widespread in the Old World tropics including parts of central Africa and extending to Australia, Hong Kong, Malaysia and the Phillipines. It was first recorded in Europe in the Algarve region of Portugal in 1997, and rapidly colonised southern Spain and the rest of Portugal. The first British record was from the Isle of Wight in 1998. There have been a couple since our Tresco individual but still a very rare species here, a presumed immigrant from the adventive European population. Actually, only hours after potting this moth in the early morning I was out and about seeing Rose-breasted Grosbeak on St Martin's after an infamous boat-swap somwhere between Tresco and St Mary's, and then later a Paddyfield Warbler on St Mary's - what a major day! The rest of the week was less intense, though a drunken golf buggy joy-riding incident still makes me smile ....
Posted by Skev at 22:24

Interestingly I think I now possess Richard's old moth trap - A wooden Skinner - that caught said second for Britain. Am I right??

Yes, it was a wooden skinner and I think it was Richards.

The H. licarsisalis was the mothing highlight whilst I was there, but a couple of nights after I left Andy & Richard caught another interesting pyralid which was a first for Britain and the Western Palearctic (Diplopseustis perieresalis).

Please dont tell me that was in that trap too. Needless to say it never brought me quite the good fortune using it in VC55......

Yes - same trap. You no doubt already realise that it is therefore also the same trap that took the first Webb's Wainscot for VC55 whilst in Richard's garden ;-)
I would very much hope that the bulb and egg trays have been changed several times since 2001!

You forgot I still was on Tresco at the time and you were jammy that you did fall in when you transfered boats!?!

There a groan from everyone else on the boat when I safely landed without getting wet - I would have got a round of applause if they'd had to fish me out.
Shame you missed the RBG ......

Me, change a bulb.......Never. I think it came minus electrics as I recall. It doesn't really get a look in now with my 'Russell' trap but maybe I should wheel it out for old times sake next year.

Hi, I have just posted the carnival, "The Moth and Me #8", on my blog, "Wanderin' Weeta". This post has been included. Great photos!