Not much in the traps this morning, but I still managed a new species for the year: 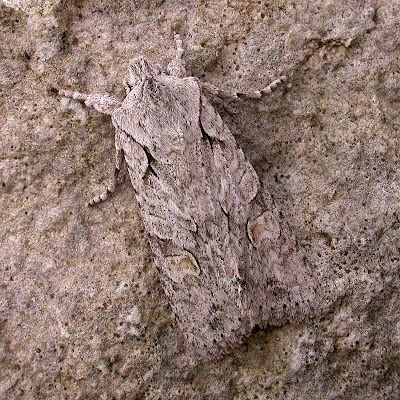 This is not a regular for my garden, and it's the first time I've taken it here at the start of its flight period, the other 3 individuals all turned up in the spring after hibernation.

Also 3 of these in the traps: 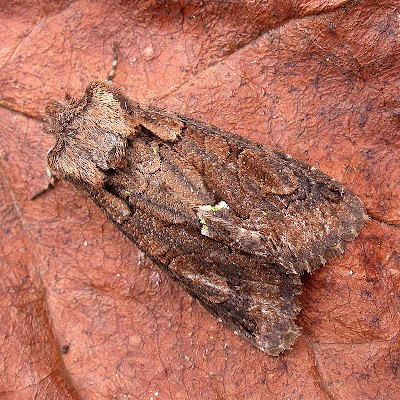 Early afternoon I headed over to Eyebrook Res in the hope (rather than expectation) of picking up Jack Snipe. A quick look along the inflow from the bridge drew a blank. I also checked the inflow for the Pec Sand and there was no sign. Moving round to get better scope views I confirmed that there was really not a lot about at all (not even much water). A car pulled up and out popped Brian Moore (aka The Wearside Whippet) - long time no see. We jointly failed to see anything more exciting than a Red Kite (which was nice all the same) and a handful of Snipe on the far bank. Brian was only stopping briefly after doing RW in the morning, so I moved on a bit but nothing else other than a few Goldeneye fresh in. I then doubled-back to re-check the bridge and the inflow - there back in exactly the same spot as I saw it last week was the Pec. Still no Jack Snipe.

Later this afternoon I noted that the LROS website detailed a Bittern at Cossington Meadows - interesting but a bit late to bother heading over. At precisely 17:59 I got a text alerting me to the fact that the Cossington bird was now confirmed as Little Bittern. WTF! Way too late to get over there before dark from my house. Apart from being a VC55 mega (first since 1954), I haven't seen one in Britain anywhere. Needless to say I will be there at dawn (though tomorrow I am constrained so unless it shows before 09:00 I will have to go back).
Posted by Skev at 22:21

I reckon it did a moonlight flit Mark...be good if it proved me wrong tho and showed up again.....