I joined Adrian Russell and Keith Tailby for an early morning clearwing search, targeting poplars for Hornet Moth and sallows for Lunar Hornet Moth. We met up at the Loughborough site where Hornet Moth was recently found, but no emergences whilst we were there. We then moved on to Twenty Acre Piece near Six Hills. First time I've visited this LRWT reserve and it wasn't quite what I expected - very overgrown grassy habitat with plenty of thistles and other flowers bordered by scrubby trees. No sign of any Lunar Hornet Moths on the sallows, although Adrian found a few holes (but nothing to indicate that they were not from beetles). Absolutely loads of Ringlets flying about in the early morning light - possibly one of the drabbest butterflies going. 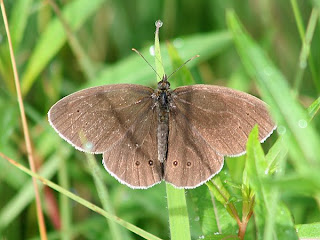 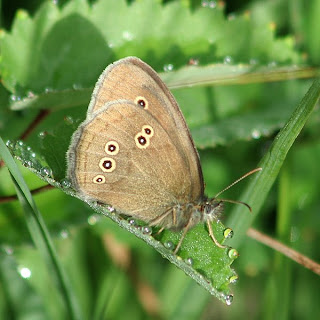 Also quite a few skippers, mainly large, plus a few quick-escaping hawkers (no idea which species) and a really smart hoverfly that I can't identify (thanks to Russ for identifying it as Chrysotoxum bicinctum). 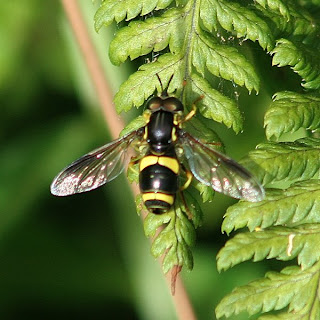 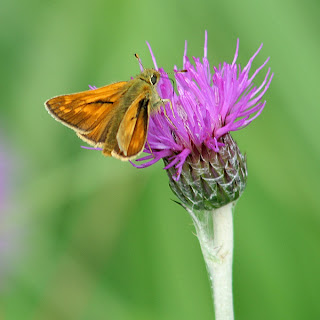 I call this composition 'thistle with a Large Skipper on top'

Next we had an equally fruitless half-arsed search at Watermead CP North, before heading to the nearest McTakeovertheworld for a very welcome double sausage and egg muffin and coffee.

Last stop was an area of land adjacent to the River Soar, known as Belgrave Gardens I think. There was a record of Lunar Hornet Moth from an adjacent garden a few years ago but no sign on any sallows. We did find a few tenanted mines on London Plane though - can only be Phyllonorycter platani (first recorded in UK in 1990, and only last year in VC55).
Posted by Skev at 23:35

Skev, your mystery hover is Chrysotoxum bicinctum I think and yes, they are very smart.

And another thing....the area you mention in Belgrave is my lunchtime patch but haven't even noticed London Plane. Will look today. There is Horse Chestunt Leaf Miner though......

It seems to be a good year for Ringlet - I've been getting them in my garden every day recently, and there are lots in the field at the back. Very few other butterflies though, and I still haven't seen Small Tortoiseshell in the garden!

I think the butterflies have been massively affected by the shite weather last summer Andy, I've seen hardly any in the garden so far this year and very few when out and about (apart from these Ringlets).